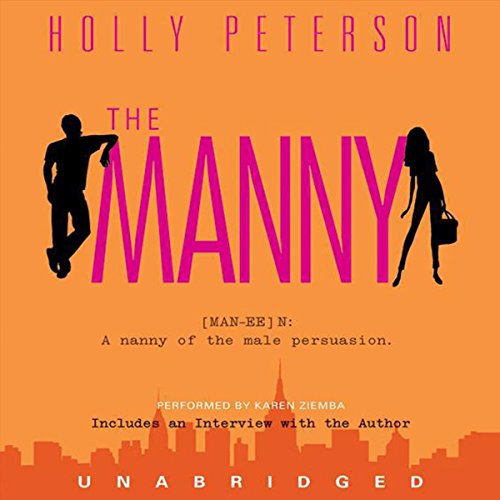 "Holly Peterson has a keen observer's eye for the frailties, foibles, and frivolities of present day upper class life among the rich of New York City. She understands her territory well and writes with authority." (Dominick Dunne)
"Holly Peterson writes about the rich with acute understanding and a drop-dead eye for detail. The funniest, sexiest ride in the limo lane since The Bonfire of the Vanities." (Tina Brown)

What's a Park Avenue working mom to do when her troubled son desperately needs a male role model? If she's like the gutsy heroine of Holly Peterson's astute new comedy of manners, she does what every other woman on the block does. She hires a manny.

A middle-class girl from Middle America, Jamie Whitfield isn't "one of them" but she lives in "the Grid", the wealthiest acre of real estate in Manhattan. And she has most everything "they" have: a sprawling apartment, full-time help, and her very own detached attorney husband. What she doesn't have is a full-time father figure for their struggling nine-year-old son, Dylan.

Enter The Manny. At first, the idea of paying a man to provide a role model for Dylan sounds crazy. But Peter Bailey is calm, cool, competent, and so charmingly down-to-earth that he's irresistible. And with her career as a news producer in overdrive, and her husband locked in his study, Jamie is in serious need of some grounding. But will the new manny in her life put the ground back beneath her feet...or sweep her off them?

Not a Fun Summer Read

I downloaded the Manny, thinking it would be a fun light-hearted listen of the "chick lit" variety. This book is neither fun, nor literature and it is definitely not entertaining. It's hard to know who to blame, the narrator or the author, for why each of the characters is so unlikeable. It's incredibly cliched -- middle class midwesterners are good -- rich new yorkers are bad. There is nothing nuanced about any of the characters, it's not funny and the plot is predictable and tiresome. I wish I had heeded the bad reviews and stayed away. If you need a lighthearted summer listen try "Shopaholic has a Baby." If you want engrossing, entertaining and literary, listen to "Free Food for Millionaires" -- my absolute favorite listen of the summer. Stay away from the Manny -- you can't get those 11 hours back!

the book is as bad as the name

I tried to give this book a chance. I listened to the authors political views on how mistreated the liberal media is. The right wing conservatives setting up the poor misunderstood television station. Spoiled rich liberals living the good life cheating on their spouses.
It never improved. Shoot me if I ever listen to another one of this authors books again.