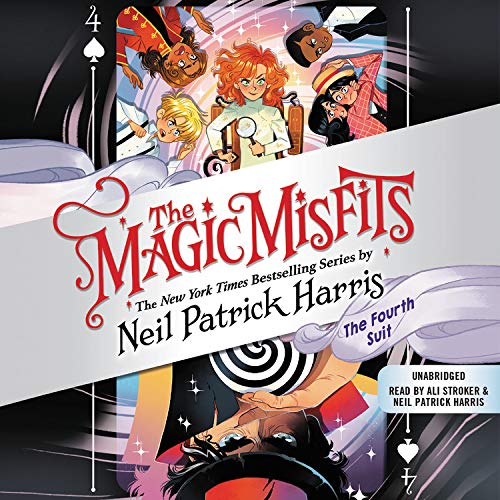 The Misfits must work together to fend off mysterious attacks in this magical finale to the number-one New York Times best-selling Magic Misfits series from acclaimed and wildly popular celebrity Neil Patrick Harris!

Ridley Larsen is everything you want in a friend. She's tough as nails, she's fiercely loyal, and she's smart as a whip. But she can be a harsh critic, which has put her position with the Magic Misfits on the rocks, even as the threat of the group's longtime enemy Kalagan looms large. Ever since his recent appearance in Mineral Wells, the kids know that a showdown with the vicious magician is imminent.

They must first deal with a series of odd instances and random attacks, though, all of which they use to bring themselves closer to discovering where Kalagan may be hiding, and the nature of his true identity. But can Ridley finally master her temper and put her essential magical skills to good use? She'll do anything to protect her friends, and when the time comes, she'll find that the Magic Misfits are strongest when they all work together.

Join the Magic Misfits as they discover adventure, friendship, and more than a few hidden secrets in this finale of the unique and surprising series. Whether you're a long-time expert at illusion or simply a new fan of stage magic, hold on to your top hat!

The Magic Misfits: The Fourth Suitに寄せられたリスナーの声

I think that the only thing wrong with it is the narrator. I get that its supposed to represent one of the characters, but it really isn’t the greatest. Other than that, it made me really *sniff* sad when this came to a final ending.

OMG!! I just HAVE to say this

I'm a HUGE fan of The magic Misfits, and this like all the other ones, is INCREDIBLE! The Narrator is so good, I could listen to her all day. The story, the story is amazing 😍 Stakes are really rased! I wanna reveal a spoiler with Carter, But that would be big one. I guess if you wanna find out, you'd have to buy it and find out. I really recommend. Just make sure you've listened or read the other books first.
ALSO! I THINK I WROTE THE FIRST REVIEW! 😄PS, good for kidz. Cuz, I AM a kid. (I also had the first rating! The book came out today)

I loved it! It was a amazing book! I couldn’t stop reading until the end!

My kids and I have loved this book series. But this narrator's interpretation of Izzy and Ollie's voice in particular is painful to listen to. It's really making it difficult to continue listening to this story.

The other three books had solid narrators. This last one is a struggle to get through, honestly. It seems like the story is on par with the others but I am not enjoying it nearly as much. The clear intention of being representative for all four points of view on these stories is great, unfortunately the narrator chosen is just not up to par. A shame, because the series itself is very cute.

The story was ok. It was along the same line as the previous books. The narration was horrific. Even my kids complained about how terrible it was. I am generally not picky on narrator but this was so bad. We made it through (mostly because we were invested after listening to three books already) but it wasn't pleasant. Even without considering the atrocious voices, I do not feel this was priced fairly. These are such short stories, including a lot of filler in the magic tricks teaching, just not worth the credit.

I Love this book

Sim sallabim!
I am Ena.
I am 9 years old.
I love this book.
Sim Sallabim.

I freakin loved this

This was a good conclusion, although there's still an unanswered question or two about Carter. The narrator's performance, however, is the worst of the series. I liked her version of Ridley, but the rest of the voices she did were sometimes borderline unbearable. I had to stop listening a few times to take a break from it.