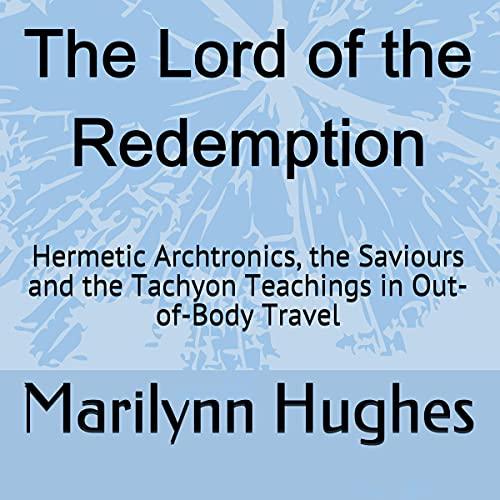 The Lord of the Redemption

And I saw work that the Lord would have me do in this venture, to bring the consciousness of humanity ever closer to the consciousness of all universal life. And I nodded in acceptance of this task to bridge that divide between them. And I contemplated the titles given to me for this rendering: "Hermetic Archtronics, the Saviours and the Eltachyon Teachings in Out-of-Body Travel".

The individual definitions came to me as I contemplated upon the words. 1.) Hermetic - meaning to seal something completely and airtight, 2.) the Saviours - being the descent of the vibration of incarnate deity or masters from the above to the below, 3.) Archtronics - the unifying structural design of things and 4.) Tachyon - the particles which travel beyond the speed of light. What did it all mean? It was simple, really. Redemption itself is the sealing of a soul completely in an airtight compendium to that of the divine movement and will. And this has already been accomplished through the descent of the saviours. Their recurring teaching focuses on one thing - a curious thing, an unexpected thing - taking refuge in divine name. This is efficacious because the divine name heralds a vibration.

Structurally, in the world of vibration, it is the divine name which unifies the individual personality to the great field of being. In its highest thrust, that vibration will attain to the field beyond the speed of light, beyond human capacity and the physical world, the field of calm abiding. And it is here that the death of the multiplicity has already occurred. To this world the human soul must seek to become compatible if he is to reach the highest spiritual pinnacle afforded to those in the mortal realms below. He must himself become a field.

As I continued pondering these things, I looked up. And suddenly, they were there.” - From The Lord of the Redemption, by Marilynn Hughes

The Lord of the Redemptionに寄せられたリスナーの声