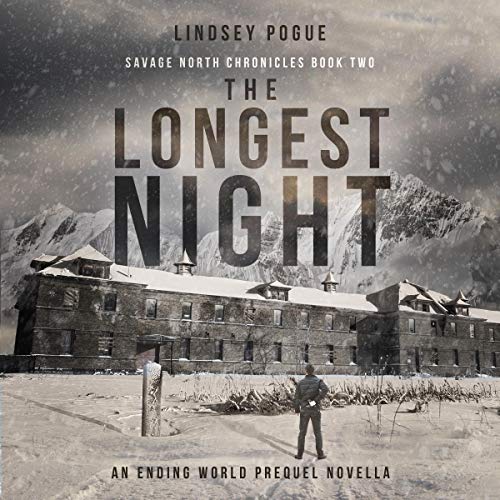 Alaska can be a bleak and dangerous place, especially in the dead of winter. But when hair-raising whispers about an outbreak reach the small harbor town of Whitely, the townspeople face a new, unfathomable fear - the virus is coming for them.

Life seemed complicated for Sophie Collins. She had teen pregnancy and her squeaky-clean reputation as the mayor’s daughter to worry about. But strict schedules and perfectly groomed hair become yesterday’s concerns, as
bloodcurdling screams pierce the night air and lurid memories haunt feverish dreams. Weak and alone, Sophie must survive the longest, most terrifying night of her life, and pray she won’t be the only one left when she wakes.

Alex Ortiz is the new kid from the wrong side of the tracks, and trouble seems to follow him wherever he goes. It’s all he can do to keep his head down until his 18th birthday, when he can leave his life in foster care behind him. But Alex doesn’t realize he and the quiet girl from class with lonely blue eyes are fated in the most impossible way imaginable. Death is everywhere, and even in the gray dawn of morning, after the fever subsides and the world echoes in silence, Alex will have to face his darkest demons yet.

The Longest Night is a prequel in the Savage North Chronicles, part of the best-selling post-apocalyptic Ending World.

Perfect addition to this fantastic series

I was really excited when I heard that we would be able to backtrack and hear Sophie's and Alex's backstories and therefore, piece it all together. This story tracks the beginning of the end from their eyes, and although we are reading it from the POV of teenagers, it doesn't get immature. From different backgrounds and with very different issues to face, even before the apocalypse, they still both find empathy for the other. A touching story, covering the very real struggle of modern life and delving into the horrors these teenagers face when the few adult figures they had disappear along with the rest of the town. How will they know what to do?

I have read the books prior to this audible book and I love the new experience with the audiobook version. I have been enjoying re-reads of favorite books in this way for a while now.

Luis is an absolutely fabulous narrator, he is getting better and better. I am already a big fan.
Sarah has a pleasant voice, but her narration voice is still a little bit too 'wispy', although it doesn't impact on how I enjoyed the story.