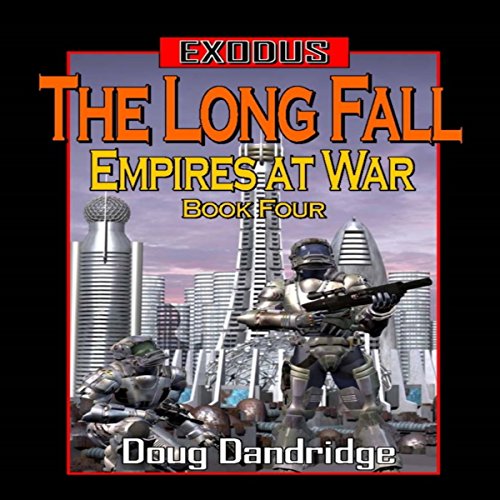 The saga continues, as an Emperor is seated and the threat from the Ca'cadasan Empire grows. Sean is back, saved from the grasp of the Ancient Enemy. And the Ancient Enemy is going full bore into the heart of all the human kingdoms. The Ca'cadasan Empire has it out for the humans. Their emperor had ordered the human species exterminated. But the humans got away, at least some of them, and established themselves 10,000 light years away in the Persius Arm. They were given a thousand years to establish themselves, but now the Ancient Enemy has found them, and they are still determined to wipe out over a trillion humans. Those humans are not so inferior in their tech as they were, only a couple of decades behind the Ca'cadasans. And they have the Donut, the enormous space station built around a black hole, a century in the construction. The Donut generates wormholes, the one major advantage of the humans over their enemies.

There are other technologies on the horizon that the canny humans hope to gain advantage from - if they can keep their Fleet together long enough in the face of a mighty foe to deploy what they hope are war-winning techs. And in the capital of the New Terran Empire, plots are still alive. The plots of other governments, and of humans with their own agendas. Old enemies sharpen their knives, determined to catch the humans in disarray, while new allies come in on the human side. Will it be enough? Or will humanity be forced to flee once again?

ok, i will be the first

Where does The Long Fall rank among all the audiobooks you’ve listened to so far?

very high, Doug Dandridge is an excellent writer imo, and this series has been up there for me at least, with B.V Larson, John Ringo, Jack Campbell, and many others, and I really look forward to all of this series being put on audio, I have read up to book 6 so far, but my work and other activities in life lead me little time to sit and read, so I enjoy listening to books while I work, and a good well written story and a good narrator just helps the time fly by.

What was one of the most memorable moments of The Long Fall?

Which character – as performed by Nick J. Russo – was your favorite?

not going to say, as I prefer not to give spoilers

I had noticed there was no audible reviews and thought someone needed to step up, this is an excellent series and is narrated well so I wanted to let people know, its worth a listen

Fourth book in and still action-packed

The Exodus Book series has yet to disappoint. I anticipated a slowdown in the action on this fourth book but was pleasantly surprised when things kept on pace. The author did a good job setting up the The series with a relatively slow first book that established a tremendous amount of action for each of the following books. This one has slightly less characters to keep track of.

As far as the narration goes, I don't think I've heard a better narrator. What makes The book particularly entertaining is that the narrator is able to change his voice according to the species both in cadence and tone.

This book is slightly shorter than the three previous in the series, but still slightly longer than the average book of it's type.

I wish there was audio books for the rest of the series.:( I loved this series.

A good book in the series and the narrator does a great job of bringing the story to life.

What made the experience of listening to The Long Fall the most enjoyable?

Great story! I can not wait for the rest of the series to be recorded.

Easy to read and good research into space mechanics. I hope to see more books of the series added to the shop.

Would you listen to The Long Fall again? Why?

Yes, And I have, on numerous occasions.

Eagerly awaiting the next installment of this fantastic series.

This book feels like a weaker effort than the previous installments. I can't point to any single reason for this, there are just more poorly worded sentences that should have been caught by the editor (duplicate words, etc...). The level of cheesiness also rose sharply with this book. Without knowing that it's the 4th book in a series I would have concludes that it was the authors first effort.

not sure why only option is 1 star

good narrator, good story, it's a good step in the story, on it's own a good book