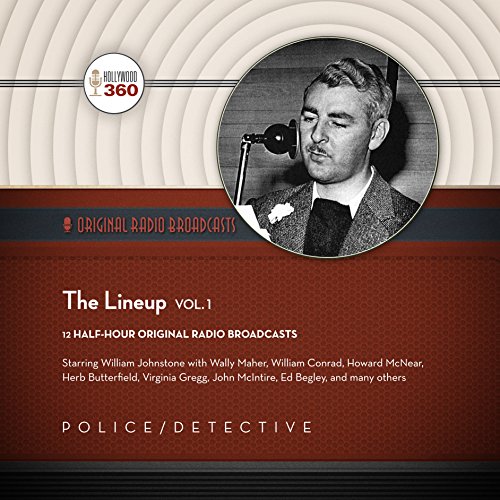 From the golden age of radio comes 12 episodes of this popular and realistic police procedural.

The Lineup was a hard-boiled drama. Like Dragnet, it realistically showed police doing their jobs. The show always began with a police sergeant ordering suspects to stand at attention so that the victim, behind one-way glass, could try to identify the criminal. While the lineup was rarely the key to solving the case, it did give the show a rhythm and also allowed for humor in the interrogation of the suspects by the sergeant.

Bill Johnstone, best known as one of the voices of The Shadow, starred as Lieutenant Ben Guthrie. Wally Maher originally played Sergeant Matt Grebb, until the actor's death. His character was replaced by Sergeant Pete Carger, played by Jack Moyles. The supporting cast members were a who's who of Hollywood radio actors, including Howard McNear, William Conrad, Barton Yarborough, Hy Averback, and Herb Butterfield.

The series began as a summer replacement for The FBI in Peace and War in 1950, but soon got its own time slot and would remain on radio until the spring of 1953 before making a successful transition to television.