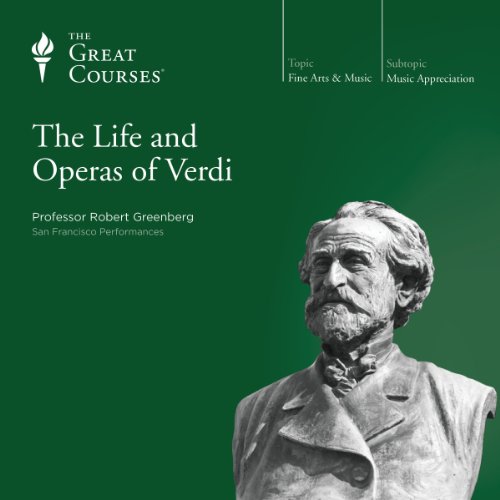 The Italians have a word for the sense of dazzling beauty produced by effortless mastery: sprezzatura. And perhaps no cultural form associated with Italy is as steeped in the love of sprezzatura as opera, a genre the Italians invented. No composer has embodied the ideal of sprezzatura as magnificently as Giuseppe Verdi, the gruff, self-described "farmer" from the Po Valley who gave us 28 operas and remains to this day the most popular composer in the genre's 400-year-old history. His operas are produced more than those of any other composer, and one source claims that his La Traviata (1853) has been staged live somewhere around the world every evening for the past 100 years!

This series of 32 lectures from one of music's most acclaimed teachers combines biography with a variety of musical excerpts to reveal the treasures of creativity that account for this popularity. It explores in depth and detail both the famous and not-so-famous Verdi operas, as well as his one great concert work, the Requiem Mass of 1874; his early songs; and his very last composition, a setting of the Stabat Mater. You trace his development from a more or less conventional composer of operas in the traditional Italian bel canto (beautifully sung) style to a creator of truly innovative musical dramas in which the power of music to intensify and explore human emotion is exploited to the fullest degree.

The Life and Operas of Verdiに寄せられたリスナーの声

An excellent review of an amazing man

What other book might you compare The Life and Operas of Verdi to and why?

How to Listen to and Understand Great Operas, Operas of Wagner

Which character – as performed by Professor Robert Greenberg – was your favorite?

From Italy with Love

The Life and Operas of Verdi

I came late to an appreciation of opera, and found this course to be a fantastic adjunct to my growing knowledge. Sometimes I think the professor was a bit snarky and tried too hard to be funny, but that is merely a quibble. He provided an amazing amount of detail about Verdi's life, and much valuable information about the major operas. I did think he dwelt too long on Verdi's last opera, Falstaff, but that is quite understandable, since it was a radical departure for Verdi (whose operas tended toward the tragic). Now I want to go visit Buzetto and see Verdi's home, and I can hardly wait until June, when La Traviata will be performed at Masada.

Overall I would recommend it with reservations. The Italian and Latin pronunciation of Professor Greenberg is atrocious. It is very hard on the ears at times. The professor should know better...It shows a lack of preparation...

What was one of the most memorable moments of The Life and Operas of Verdi?

The most memorable moment was when the professor clearly plagiarizes the Otello section of Bridget Paolucci's 1995 Talking about Verdi audio lecture...

The music...I am looking for information about the casts and recordings used...

He leaves out a discussion of some of the pivotal operas in Verdi's career, especially Simon Boccanegra and the revision with Boito...Why? I would like to know?

Brilliant narration but too much focus on the man

Where does The Life and Operas of Verdi rank among all the audiobooks you’ve listened to so far?

It would be among the top 5. It is well narrated but too much focus is on the man and not soo much on his music.

What was one of the most memorable moments of The Life and Operas of Verdi?

The episode of the creation of Otello and Verdi's passion and patience with composing.

At moments it made me feel sad with the way the author defined the pains of Verdi.

The Passion of Verdi vs the wit of the Borscht Bel

This series, originally given in the 90s, is hard to fully evaluate. You will either find Greenburg's OTT somewhat contrived informality irritating and distracting, or--as I did--a welcome counterbalance to the detail-laden treatment of Verdi's life and development as a composer. I am something of a Verdi scholar myself, and thought I had a pretty thorough knowledge of his works etc. - but Greenburg's use of correspondence from other people, early biographies, contemporary newspaper articles informs us and gives us a wider understanding of Verdi than would be true if we were left with Greenburg's own reverent passion for him--which is seldom critical and often drenched in operatic hyperbole. Even so, again, as an audio course, i have suffered through too many lifeless lecture series to really whinge on about this guy. I learned a lot, and rediscovered a pleasure in experiencing some of Verdi's middle operas that I had long forgotten. If you can get past or get along with the Borscht Belt bits, you will come away knowing a good deal about Verdi and his operas. I don't write many reviews (no time) but I do want to draw attention to this worthwhile course in what is otherwise an often mediocre product from the "Great Courses" company.

The over acting from the narrator was a shame

The shouts and screeches hurt my ears quite often. Besides the over acting and screeching loudly, I do recommend it, just be prepared to lower the volume whenever he starts acting out the opera.

Once again Professor Greenberg has given a superb summary;this time of the life and operas of Verdi.It is long and detailed,just as it should be.Bravo Robert Greenberg

Good, but not great

Offers a good introduction to Verdi’s operas and biography. Could’ve been divided up better, some operas are barely glanced over and others, like Falstaff, are given all too much attention.

Greenberg is not for everyone, but if you like a bit of pomp with your lectures, you’ll love this. I was familiar with Verdi before this course, but I learned a tremendous amount. Well worth it.

No one in Great Courses is like Prof. Greenberg, and no one is better suited to tell the tale that is the life and art of Giuseppe Verdi. The lectures go over his life, times and key operas in detail. Of course, there's not enough time to go over all of them in detail, but that is what whole recordings are for. If you at all love music, Italian or European history/culture, and art that speaks to truly achieving a higher level of living, listen to these lectures. Viva Verdi!

Comprehensive picture of music and society

Would you listen to The Life and Operas of Verdi again? Why?

Yes, I discover new enjoyable moments every time I listen to

Have you listened to any of Professor Robert Greenberg’s other performances? How does this one compare?

Yes, for me as an enthusiastic but amateur listener this book helps to understand dimensions I did not access before

No. You have to return to it from time to time. But this is worth to do it.

I can only recommend it to everybody.

This is the third series I have listened too by Robert Greenberg and definitely the worst. There is far too much detail on some of the operas, especially Rigoletto and Falstaff where Greenberg spends literally hours just going through his spin on the story in his excited voice. There is very little music in these lectures, a lot lower percentage than there was in the other series. If there is not to be music I'd rather hear about Verdi's life than listen to a blow by blow account of the librettos.

Verdi was quite the character and this series of lectures is an excellent introduction to both the significant experiences of his life, his professional relationships, and the development of his music.

Professor Greenberg wants us to get a sense of Verdi's personality and characteristics as a window to his music and his passion and sincerity lend colour and verve to these lectures. Dry this material is not!

Professor Greenburg's soapbox moments are a real highlight. Agree or disagree there's something about a passionate opinion, eloquently expressed, which captures the attention and rewards the listener. Bravo!

What would have made The Life and Operas of Verdi better?

A narrator who did not belittle every opera he discusses by assuming the voices and characteristics of a Bugs Bunny cartoon. Some synopses may be problematic, but to adopt a pseudo-comic voice and kindergarten slang is unnecessary and inappropriate to a 'college-level' lecture series.

Probably the Naxos Verdi audiobook, which, although shorter, will be unlikely to wallow in flippancy.

Who might you have cast as narrator instead of Professor Robert Greenberg?

Anybody else: maybe one of the narrators of the Modern Scholar series, who take their lectures seriously.

If you could play editor, what scene or scenes would you have cut from The Life and Operas of Verdi?

Lengthy retelling of the story of each operas should be cut, with more college level musical information in its place (narrated properly, of course). Biographical information is fine as is, as are the musical extracts.

This could have really been a 'great course'. Pity.

Breathtakingly informative and entertaining. Robert Greenberg is the ultimate communicator and leverages his unsurpassed erudition.