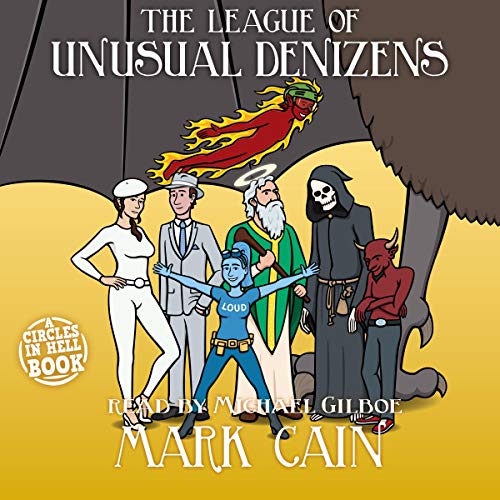 The League of Unusual Denizens

The only thing worse than the end of the universe is...Casual Day.

Six denizens of Hell, one saint and a small blue alien join forces to stop the ultimate catastrophe: The destruction of the cosmos. That most of them are dead is of little consequence, for they possess great powers. Halos and horns, strength and sarcasm, courage and comedy, oh, and a management textbook: This team has them all. They are The League of Unusual Denizens.

LOUD: A superhero team par excellence on the ultimate voyage through what is truly the final frontier.

LOUD: A stupid acronym, though it fits well on a T-shirt. And this team of misfit heroes will need every advantage if they hope to save the heavens and the earth from returning to Chaos.

Here they go, into the breach. Get loud!

The League of Unusual Denizens Is the eighth volume in the satire/fantasy comedy series, Circles in Hell. It has been compared to other works of “Hell Fiction” including The Screwtape Lettersand Good Omens and to the paranormal humor of Tom Holt, Christopher Moore, and Douglas Adams.

Time to get LOUD!

I tuned into the Circles in Hell series way back when Hell's Super was released, and I've been looking forward to each installment as they've come out. Book 8, The League of Unusual Denizens, is a return to the hijinx of Steve Minion and his pals. This after the author did a bit of a departure with books 6 and 7.

I love how he is exploring different themes and settings for his characters. The Circles in Hell series is not just an endless rehashing of the same story over and over again.

My favorite part of this book is the further development of Uphir, the demon physician. He was a just an annoying (but important) foil during his brief interactions across the first five books, but in this one you see many sides of the demon, and it really brings this book to life. His bizarre friendship with St. Patrick is absolutely brilliant.

I definitely recommending all of Mark Cain's books. They are easy to follow, funny, full of great characters, and are based in the actual folklore of history's various iterations of Heaven and Hell (ie you can learn something!)

As always, narrator Michael Gilboe is amazing. He has all of the voices down, beautiful tone, and his pacing and enunciation are spot on.

Mark Cain and Michael Gilboe are a great combo. As long as, they keeping popping these books out, I will continue purchasing them.

Seriously, how has this series not been picked up by Netflix or Amazon?

Excited for a new adventure!

Didn't like it as much as the others. It was certainly funny like previous novels, but tended to veer into ... too much chaos and it was kind of distracting sometimes.

That being said, it was nice to see some of the old gang again.

We did it! We worked as a team and we won!

Man, each time I wait and see how this story evolves, Mark pulls out another awesome contribution to the afterlife universe that is Steve and his band of friends, bosses, and antagonists. This was the most fun book out of the series since book one simply because of the diversity in characters and personalities. Loved Dorla and Willard's tale!

What happens when Chaos/Panemonium experience a problem that has the potential to unmake reality? Well, this is a depiction of what could happen. This tale brings back some old favorites from way back in the series along with those we've come to know and love: Oofer, BooH, Flo, Bic (I just noticed the play on his name, it never dawned on me before), and many others.

It was so much fun to watch this team of loveable, and hateable depending on the team you root for, characters come together. St. Patrick and Oofer were an awesome pair!

I mentioned it in the Circles in Hell Facebook group, not realizing that Mike is the one running it, that Mike Gilboe did a wonderful job with this one. Talk about a challenge with remembering so many different characters and voices, but he pulled it off without a hitch.

Well done, as always, Mark and Mike! This was a masterpiece.

Oh, and I loved the portrayal of chaos near the end :)

The book was ok

not as entertaning as others & unfortunately Minion (Steve Minion) has gotten a bit boring. Now that he is saved & all well.... I feel he has run his course now.