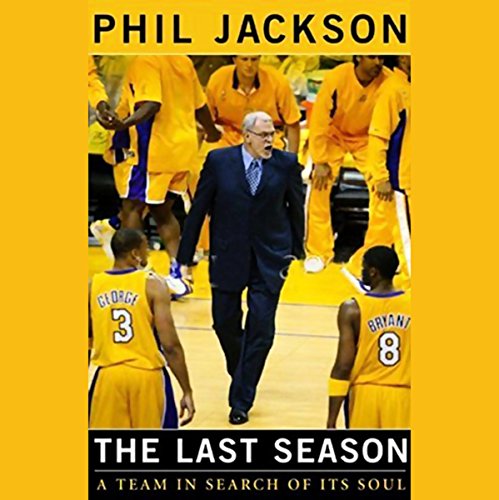 Nine-time NBA Champion coach Phil Jackson knows all about being in the spotlight, about high-profile, high-pressure seasons coaching gigantic personalities through adversity and controversy in the middle of a media hothouse in which every move is another headline, another installment in the soap opera. But nothing, not six championships with the Bulls of Michael Jordan, Dennis Rodman, and Scottie Pippen, not three previous championships with the Lakers of Shaq and Kobe, had quite prepared him for the only-in-Hollywood high-wire act of the Lakers' 2003-2004 season.

In The Last Season: A Team In Search of Its Soul, Jackson tells the full inside story of the season that proved to be the final ride of this great Lakers dynasty. From its beginnings in the off-season, with the signing of the future Hall-of-Famers Karl Malone and Gary Payton and the enormous expectations it created, and the bombshell news of the felony sexual-assault charges against Kobe Bryant, one of the league's marquee superstars, Jackson describes the many challenges that arose during this turbulent season. Juggling enormous egos with enormous sums at stake, managing difficult relationships and public feuds, facing injuries, contract disputes, and team meltdowns, all in the shadow of the Kobe Bryant trial-slash-media circus, Phil Jackson somehow guided his team through to its fourth NBA Finals in his five years as its coach. There, finally, his team ran out of road, a failure Jackson examines with the same deep honesty and wisdom he brings to bear on the rest of this amazing season.

Few seasons in memory can rival this one for drama, and fewer coaches rival Phil Jackson in the ability to write about it with such wisdom and clarity. The combination has produced, in The Last Season, a book of tremendous human drama and timeless appeal, rich in lessons about coaching and about life.

I have been an Audible subscriber for a long time. This is one of the most disappointing audio books I have ever listened to. The content is good, but the reader is not good at all. His style is to sound annoyingly assured and it is painful to listen to. I would recommend any one interested in this book to read it rather than listen to it. Like I said.........what a shame.

I completely agree with some of the other reviews, the narrator does a very poor job of conveying the otherwise fascinating information contained in this book. He reads in a smug, arrogant tone and all too often mispronounces player names. I found this very distracting during much of the listen.

The content itself is good and I would recommend the BOOK to any basketball fan.

learn the names and the game

This is an excellent story, however, the narrator didn't do his homework. Many of the names are prnounced wrong (Turk-a-glue, No-wits-ki) and all of the African-American athletes have voices like high jazz saxophone players. Come on - at least get someone who has respect for the game to read this book, or at minimum, some one who will learn to pronounce the words properly.

I must begin by confessing (1) I love the Lakers of Magic Johnson and Kareem Abdul Jabbar; (2) I love the Bulls of MJ, Dennis Rodman and Scotty Pippen; (3) I find the current crop of NBA players, typified by Kobe and Shaq, overpaid underperformers with a startling sense of entitlement.
I was interested in hearing what Phil Jackson had to say about The Last Season. He did not disappoint me. When he wrote about his former Bull team and team members, you could sense the love and longing in his tone. His heart was (and might always be) with them. When he writes about the Lakers, he is writing from the outside, as an observer, a hired hand. He admits that he felt an outsider, he refers to "The Laker Organization." He does not refer to "us." This lends some objectivity to his observations and comments.
He confirms my preconceived ideas about Kobe, but has forced me to re-evaluate my opinion of Shaq. Last week Kobe scored 41 points in a game and the Lakers lost. Based on what I heard in The Last Season, Kobe must be very happy. He is the star, there is no one around him competing for the limelight and he can say to one and all, as many three years olds like to do, "You are not the boss of me." Oh, the Lakers are losing? Who cares, its all about me, me, me.
I would recommend this book to any who is a fan of the NBA and is curious about what can cause a team with seemingly limitless talent to fail to reach its potential. For Phil Jackson, winning is not the most important thing; striving, doing your best, those are the things that count.

Although I live in the LA area, I am not a Laker fan. In spite of
this, I really enjoyed Jackson's chronical of a season I did not
follow. His description of the travils of coaching provide a good
insight into the profession.
This book has not converted me into a basketball fan; however, I am
a fan of Phil Jackson and hope he goes back into coaching or writes
another book.

Wow , great book........ I’m in business and was looking for info to lead different type of people. This book helped big time !!!!

the story was good alot of insight on the lakers. Kobe really surprised me how arrogant he was. he was the one who split shaq and Phill away.

Basketball fans will love this! 2003 to 2004 season in a time capsule I never knew exactly how bad of a person Kobe is till I read this book.

A Must Read for Any Sports Enthusiast

Where does The Last Season rank among all the audiobooks you’ve listened to so far?

The entire book was a favorite. The story gave me and my husband an in site into the Los Angeles Lakers and the life of Phil Jackson.

If I had to pick one scene in the book, it would have to be the relationship between Kobe and Shaq. Whew! What turmoil.

Behind Closed Doors: "Phil Jackson and Your Los Angeles Lakers, Uncut and Unscripted."

I downloaded this book for my husband and found myself cuddled right under him as he was listening to it every time. It was a great audio book and I would recommend this book with a 5 star rating.

What did you love best about The Last Season?

I'd listen to Stephen Hoye read a grocery list - he's the best. And he conveys Phil Jackson's ups and downs during the course of this season. Jackson is a good writer and insightful. It's surprising how willing he was to be so honest about Kobe and Shaq, and just about his feelings in general. I don't think a non-sports fan would enjoy this much, but if you like sports, and especially basketball, you'll find a lot in here that's worthwhile.