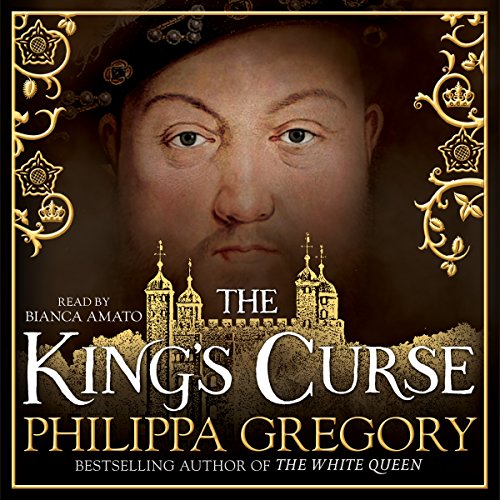 The riveting story of Margaret Pole, daughter of George, Duke of Clarence, and was one of the few surviving members of the Plantagenet dynasty after the Wars of the Roses. Plantagenet, once carried proudly by Margaret like a crown upon her head, is now, at the end of the 15th century, the most dangerous name in England....

Irritating if you're english!

What did you like most about The King's Curse?

Great story, despite the author's penchant for needless superlatives and "oh"s every so often, it's always fascinating to imagine the narrator's viewpoint and I forgive Philippa Gregory because she is foremost an historian!

What aspect of Bianca Amato’s performance might you have changed?

Oh please somebody school Bianca Amato in English pronunciations! Mispronouncing things like "Berkshire" is pretty unforgiveable. Also no-one in England says "orf" anymore, not since my grandmother died. Just consult a native. FYI other mis-pronunciations include Magdalen College, and Chapuys (amongst many more). Sorry, pet hate :)

A Fly In the Ointment

Would you listen to The King's Curse again? Why?

I enjoyed the rich and warm tone of Bianca Amato's voice - but there were some jarring pronunciation errors which really interrupted the flow for me. It wouldn't have taken much to check the pronunciation of place names like "Beaulieu", which is pronounced "Bewley", or Cambridgeshire, where the first syllable is "came" and not "camm". It was distracting, too, to keep hearing "courtiers" pronounced as if it rhymed with "more tears" rather than the British pronunciation which rhymes more with "haughtier". Such a shame, as otherwise the reading was excellent.

If you could sum up The King's Curse in three words, what would they be?

What other book might you compare The King's Curse to, and why?

Any other Philippa Gregory.

The weird swooping onto the occasional word for no apparent reason; the absolute launch she took every time she had to say the name 'Plantagenet'. Just a very strange performance all round.

I am a huge Wars of the Roses buff and a massive Richard III fan, so I will always feel slightly negative to the Tudors. The other problem with it is that of course we know how it ends - one of the problems with any historical novel, of course, and perhaps one of the reasons why it annoys me when people suddenly get a 'feeling' as they gaze at the Boy King Harry that All Will Not Be Well. There was no sign of that when Henry VIII took the throne. But people Got Feelings. I also feel that as this is part of a series there was no real need to constantly explain who everybody was in relation to everybody else - if you've read the series you will know and if you have even a modicum of interest in the subject then you will still know. A lot of it felt like padding.

This is perhaps a little bit negative-sounding, and that's not really what I mean. It's a perfectly enjoyable book with flaws, but all books have flaws. It's not easy to find something new in a historical setting and especially one that has been flogged to death like the Tudors (when I think of those glorious Plantagenets just waiting to be written about!), so kudos indeed to Ms Gregory for coming at it from a slightly different angle. There is nothing wrong with this book; it just didn't grab me. Having said that, the actual 'King's Curse' was an interesting thought, and certainly it's something that could explain a great deal.

Very interesting story of this woman who I had not really heard of before. I really enjoyed it!

I was dubious having read other reviews. I love the author and have read many of her books but never listened before. I did expect it to be slightly ruin by narration because of the previous reviews but was really pleasantly surprised. I thought it was good and thoroughly enjoyed the story.

Perfect Narration for a perfect story

What did you like most about The King's Curse?

I love the portrayal of Margaret Pole, as she is very much dismissed throughout history, as a defiant single mother who does what she needs to do to survive in such a turbulent time. Phillipa Gregory has portrayed her exactly how I would have imagined her to be and writes with such conviction you really feel like you're living her life as you're listening.

Margaret's defiance throughout, from leaving Reginald with the monks so she could survive, to her extremely undignified death.

Which character – as performed by Bianca Amato – was your favourite?

Margaret with out doubt. Bianca really helps the character come to life.

This story is a thrilling tale as a result of the Wars of the Roses. From the sudden loss of her husband leaving her vulnerable to her regaining her rightful title and her ability to adapt to any situation. Margaret Pole is truly one of the most formidable characters that survived the Cousins war to be executed by the suspicious tyrant Henry VIII. I've listened to this title 3 times now and will definitely be listening again very soon.

Philippa Gregory is one of my favourite authors and historians. I have read and listened to allot of her books and this one did not disappoint. A beautiful story about such a important woman. Such a shame that she’s been ignored from history. I highly recommend this book to anyone.

My favourite Philippa Gregory book is The Other Boleyn Girl, and I was utterly thrilled to read another of her books - The King's Curse - which so excellently brings the frightening Tudor period to life.

It did annoy me that Bianca Amato pronounced Berkshire in the American way but apart from that she is an excellent reader. She was Margaret!

This was a great listen, a strong woman's story, interpreted with a very contemporary spin

Phillipa Gregory really does bring history to life. I have learned so much through reading/listening to her books than I ever did at school. It is sickening what Henry VIII got away with and the way women were used by greedy men. It must have been awful to have been Margaret Pole going through life always worrying if any of her loved ones would end up in the Tower - I hadn't realised before how many deaths Henry VIII was responsible for.

Then I found Hilary Mantel. I started with A Place of Greater Safety and have now read most of her works.

I had never contemplated Philippa Gregory. I think there is a little scuttlebutt about her work which I fell prey to. The titles and some of the covers of her books look more Mills and Boon than serious historical fiction.

The King's Curse is my first Philippa Gregory novel and I am mightily impressed. The narrator, Margaret Pole, is such a calm observer of one of the most unique periods of English history. From the perspective of a Plantagenet, the early years of the Tudor reign can be seen from one who rides the wild vicissitudes.

The character of Catherine of Aragon is finely crafted. The tragic first marriage with the gentle Prince Arthur is truly heartbreaking. The strength of Catherine shines through and her legacy is well represented.

King Henry VIII is also well covered, from his spoilt childhood to his infamous reign, we gain a human perspective from two extraordinary women, Margaret and Catherine.

Finally, as an audiobook I must commend Bianca Amato's narration. This is a vast task, covering over 24 hours. She is memorable in her depiction of the characters and the consistency of the narrator's voice.

This will be the first of many Philippa Gregory novels for me.

Best in the series so far!

The King’s Curse is my absolute favourite book so far in Philippa Gregory’s Plantagenet and Tudor series. Gripping, moving and thoroughly entertaining! This is a book that leaves you mourning it’s end. Highly recommended!