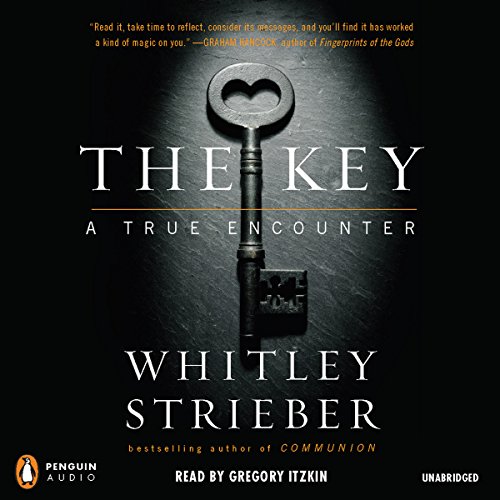 From the best-selling author of Communion comes the mysterious true story of how an unknown visitor barged into Streiber's hotel room late one night and imparted extraordinary lessons in personal development and man's fate that challenge us to rethink every assumption about the meaning of life.

At 2:30 in the morning of June 6, 1998, Whitley Streiber was awakened by someone knocking on his hotel-room door. A man came in, and everything he said was life-altering. This is the unsettling and ultimately enlightening narrative of what happened that night. Strieber was never really sure who this strange and knowing visitor was - a "Master of Wisdom"? A figure from a different realm of consciousness? A preternaturally intelligent being? He called him the Master of the Key. The one thing of which Strieber was certain is that both the man and the encounter were real.

The main concern of the Master of the Key is to save each of us from self-imprisonment. "Mankind is trapped," the stranger tells Strieber. "I want to help you spring the trap." In a sweeping exchange between Strieber and the stranger - which takes the form of a classical student-teacher dialogue in pursuit of inner understanding - the unknown man presents a lesson in human potential, esoteric psychology, and man's fate. He illuminates why man has been caught in a cycle of repeat violence and self-destruction - and the slender, but very real, possibility for release.

In its breadth and intimacy, The Key is on par with contemporary metaphysical traditions, such as A Course in Miracles, or even with the dialogues of modern wisdom teachers, such as D. T. Suzuki and Carl Jung.

The Key Unlocks the Mystery Of Who We Are

What did you love best about The Key?

This book fills your mind with peace and understanding of who we are and what we will be.

What other book might you compare The Key to and why?

Unleashing the Power of the God Code, by Gregg braden. Both books refer to the God within and how to open our minds to reach it.

Master of the Key

What’s an idea from the book that you will remember?

We need to become a compassionate world.

Wonderful listen. Everytime I listen to it I learn something new.

Totally in line with Truth

I find it a bit sad that the two other reviews before this say what they do, as it's just this kind of close minded thinking that the visitor in the book would have been aiming to overcome with his visit to the author.

I've been studying metaphysical priciples for 15 years now and I can assure you that you would be well served to expose yourself, with a relaxed and open mind, to this book.

There is a shift in consciousness taking place towards an expanded context from which to see ourselves, which is ultimately healing. Mankind at large is asleep and people like this late night caller are whispers penetrating throught the dream, encouraging us to wake up.

The narration is decent too.

Which door will the "Key" open?

I have read many of Whitley's books over the years, starting with Communion which was published in 1987.

Our generation has matured since that time and certainly we have all become more skeptical. In that sense, it is quite remarkable that despite the ridicule he has suffered, Whitley continues to share the extraordinary knowledge he has gained from his years of encounters and research

The information contained in The Key is fascinating and contains "higher knowledge" that rings intuitively honest and forthright. The Key Holder, rather than judging or condeming the human condition, appears to seek only to give us alternate viewpoints, information and predictions regarding our unlimited potential.

The narrator was a bit robotic and at times and it was difficult to differentiate between the two characters.

We may never know who or what visited Whitley in that hotel room; a human, angel, alien or God him/herself, but there is little doubt that the wisdom and warnings that were shared with and through him have the potential to benefit our species and our planet.

Whitley Strieber is an amazing writer. His words envelope you in a blanket of joy. His story is magical. It’s complex and layered information that doesn’t always makes sense. BUT when it does, it changes you at an atomic and fundamental level. There’s definitely a hefty truth that is unexpected. A sound in his words that ring true in your heart. Read it, it will change you for the good.

Would you consider the audio edition of The Key to be better than the print version?

It gave me lots to think about

I listened to this book probably six times in a row, and each time I've heard something new.
An awesome book!

WARNING: This Will Scare the Cheese Out of You

What would have made The Key better?

If you buy into this story, it will likely scare the cheese out of you.

You already know the story: A man appears to WS, who calls he the Master of the Key, and imparts all kinds of esoteric information.

The trouble comes on multiple fronts, most notably that it reads like conversation WS is having with his inner or higher self, less than a real person. Indeed, WS isn't even sure The Master of the Key is "real."

It is written in a sort of Q & A dialogue, as if it was a transcribed from a recording, with highly complex and very specific answers . WS admits that he made notes during the actual conversation but could make no sense of them, so had to reconstruct the conversation over months and even years. It seems highly unlikely, as a word for word account, that this is true the actual conversation, assuming it in fact took place.

Moreover, the material presented is often self-contradictory, which WS himself often points out during the narrative itself. The resulting explanation of these contradictions, on more than one occasion, resulted in many eye rolls and oh-brothers.

It is, however, thought-provoking. So, cheese evacuation response aside, it does deserve a listen.

I like Whitley Strieber but this one..I dont know

I have a really hard time with this one, First let me say I do believe his other true stories. I don't know why, this one gives me issues. Oh well I do love his other books...

What is The Key?

Would you listen to The Key again? Why?

I would recommend listening to individual parts of The Key again. Although the information is clumsily scattered throughout the book, many parts are reiterated more than once.Bookmarking favorite sections of chapters are a must as it makes it easier to think about what is being conveyed.

This story is best considered a parable for the twenty-first century.

What does Gregory Itzin bring to the story that you wouldn’t experience if you just read the book?

We are responsible for our own souls.

Comparing The Key to other books with a similar message such as The Four Agreements by Miguel Ruiz, The Secret, or even a more metaphysical books, the listener is left with questions that can not be readily answer. There is many revelations that pull life on earth at this time, together and gives a feeling of being relieved of guilt for all that is wrong.

You really need to listen

What made the experience of listening to The Key the most enjoyable?

There is a lot of information contained in it. It is not for a casual read. Those that do not like it that is okay not everyone is in the right place to understand it. It does make sense for those who do have the ability to want to look beyond what organized religion has done to the words of both Christ and Mohammed.

What was one of the most memorable moments of The Key?

It was confusing at times who was saying what

What insight do you think you’ll apply from The Key?

People tend to separate out others particularly religious types when in we really are connected to everything (quantum entanglement). There has been more bloodshed over traditional religion than most anything else which is just really sad.

I guess that I like to read comments that state "don't waste your money". I usually will buy the book because depending on the subject it takes some brain power to understand it, like The Key.

never have I ever been so drawn, so pissed off, so challenged and so.... moved... all at once. I'm thankful that I was pointed to this by the one person I ever listen to. thank you father Drew.