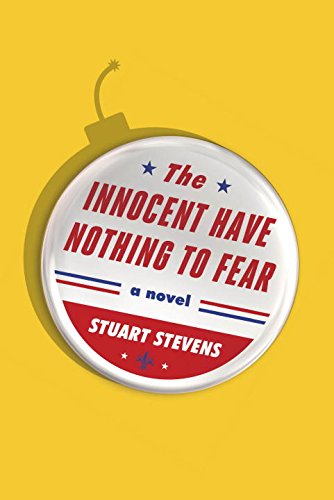 "Stuart Stevens is that rare authorial animal: a political novelist who actually understands politics, who appreciates how the ambition to run the country both shapes and warps character, and who can lay it all down on the page with verve and aplomb. Gimlet-eyed, mordantly funny, and staggeringly well-timed, The Innocent Have Nothing to Fear is the perfect fictional echo of the savage surreality playing out in real time on the national stage." (John Heilemann)
"Vivid, fresh, and funny. The characters are nuanced, the dialogue zings, and the bracing breeze of authenticity gusts from every page. Stuart Stevens knows a heck of a lot about a lot of things - politics, the press, T.V., D.C., New Orleans, love, lust, ambition, family ties, and the pressures and promises of the world's most powerful job. It all comes together in this terrific book. Smart, crafty, spot-on timely, entirely refreshing and hugely entertaining, The Innocent Have Nothing to Fear is a great read and a total winner." (Mark Halperin)

In this election caper from a leading political operative and commentator, a cynical campaign manager finds his family skeletons coming out of the closet on the eve of the convention.

New Orleans, July 2016: It's hot and sticky, and JD Callahan is fighting the campaign of his life. His candidate, the sitting vice president, is neck and neck with an anti-immigrant right-wing populist as the Republicans head into their first brokered convention in decades. Callahan, a New Orleans native without much affection for his hometown, is frantically trying to coordinate the convention and round up delegates when his estranged brother shows up, asks for an inconvenient favor, and threatens to reveal embarrassing family secrets if JD says no. Soon after, a series of bombs sets off a mass panic and tilts the convention toward the vice president's law-and-order opponent.

As JD scrambles to contain the damage, he finds himself contending with a sexy, gun-toting local gossip columnist, an FBI agent convinced that JD is cynical enough to set the bombs himself, and a host of family secrets.

The Innocent Have Nothing to Fear is a hilarious, sharply entertaining whodunit and a knowing satire of our political culture - the perfect summer listen for everyone who says he's sick to death of the 2016 campaign but can't stop reading and listening about it.

The Innocent Have Nothing to Fearに寄せられたリスナーの声

Was hoping for more convention politics..

Easy book for political junkies, but I wish it had had more political maneuvers, less detective mystery plot.

A tangled web of political politics.

The tale takes place during a political convention in Louisiana. The characters are colourful and filled with southern charm and views of life. Political hacks, campaign workers, party leaders, reporters, policemen, bombers and supporters' are all characters covered in the story. The language is pure southern drawl and stories. I loved the book and it captures the 2016 Presidential Campaign with fictional characters.

Would you try another book from Stuart Stevens and/or Dan John Miller?

I was very disappointed by the quality of the writing. Really, very amateurish. I bought it after David Axelrod plugged the book on his podcast, but I am sure Axelrod never read it. I hoped at least I'd learn something about campaigning, but that part of the story was simply standard genre exaggeration. Axelrod's own book (non-fiction) was much more illuminating in that area. Otherwise, it reads like someone took a course in thriller writing, but then wasn't really up to the task, and couldn't tell a coherent tale. The story wanders around, getting stuck in unimportant description, fails to tell an interesting story or create compelling characters, never unites on a theme, and despite having one or two interesting insights (some people memorialize The Confederacy as having been a great F-U to the establishment, and this is uniting with other aspects of popular resentment to create a Trump) the book just churns and churns and then dies.

Has The Innocent Have Nothing to Fear turned you off from other books in this genre?

No -- but it has certainly turned me off from this author

What about Dan John Miller’s performance did you like?

The performance was great -- very wide range of voices -- but it couldn't carry the weak writing.

Could you see The Innocent Have Nothing to Fear being made into a movie or a TV series? Who should the stars be?

No. It doesn't even work as a movie.

Don't waste your money on this one.