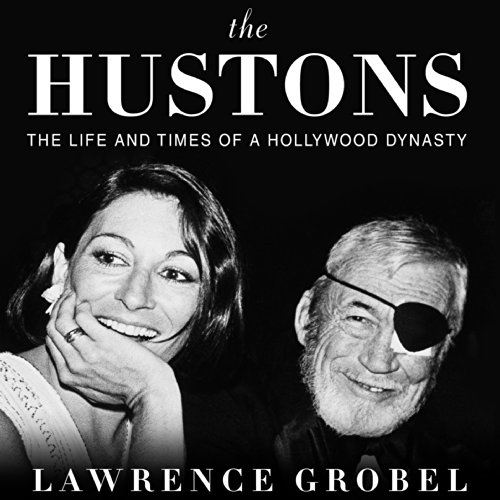 When John Huston died at 81 on August 28, 1987, America lost a towering figure in movie history. The director of such classic films as The Treasure of the Sierra Madre, The African Queen, The Maltese Falcon, Prizzi's Honor, and The Dead, John Huston evoked passionate responses from everyone he encountered. He was at the center of a dynasty, with three generations of Oscar winners (Walter, John and Anjelica). Now, for the first time as an audiobook, the complete story of this remarkable family is told in The Hustons by Lawrence Grobel. The book chronicles the family's history - from Walter's days on the vaudeville circuit and his later fame on Broadway, through John's meteoric rise, to Anjelica's emergence as a great actress in film today. Grobel interviewed John Huston for over 100 hours and conducted 200 interviews with John's four children, three of his five wives, many of his mistresses, producers, writers, technicians, and a number of celebrities who rarely grant interviews. J.P. Donleavy named The Hustons the best book of the year when it was published. James A. Michener dubbed it a "Masterpiece." Kirkus called it "Spellbinding." Larry King thought it, "Biography writing at its absolute best." Frederick Raphael wrote, "The Hustons is a delicious, wicked guide to the delicious, wicked life of a sly, sadistic scoundrel who was equaled only by Byron in the sentimental cynicism and fecund carelessness with which he played the world's game." Alyn Brodsky in The Miami Herald called it, "An engrossing study in family dynamics… Marvelous… This is one of the best biographies of a Hollywood personality since - actually, I can't recall since when." And the Hollywood Reporter said it "Reads like a gutsy movie that might have been made by Huston himself."

Central subject here is John Huston but there is a complete and interesting biography of Walter Huston and a lesser attempt at one of Angelica as well. Regardless it's such a riveting story of an infinitely interesting man. A true maverick who left us some films that hundreds of years will remember and along the way lived an extraordinary life.

terrific read
very surprising information about the family
starting with Walter Huston
the narration was very good and I was fully engaged in the story. highly recommend

A wonderful history of the Houstons, the film industry and the United States. A must listen.