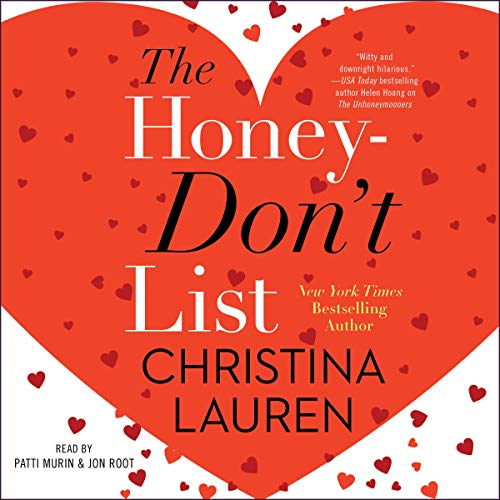 Carey Duncan has worked for home remodeling and design gurus Melissa and Rusty Tripp for nearly a decade. A country girl at heart, Carey started in their first store at 16, and - more than anyone would suspect - has helped them build an empire. With a new show and a book about to launch, the Tripps are on the verge of superstardom. There’s only one problem: America’s favorite couple can’t stand each other.

James McCann, MIT graduate and engineering genius, was originally hired as a structural engineer, but the job isn’t all he thought it’d be. The last straw? Both he and Carey must go on book tour with the Tripps and keep the wheels from falling off the proverbial bus.

Unfortunately, neither of them is in any position to quit. Carey needs health insurance, and James has been promised the role of a lifetime if he can just keep the couple on track for a few more weeks. While road-tripping with the Tripps up the West Coast, Carey and James vow to work together to keep their bosses’ secrets hidden, and their own jobs secure. But if they stop playing along - and start playing for keeps - they may have the chance to build something beautiful together.

From the “hilariously zany and heartfelt” (Booklist) Christina Lauren comes a romantic comedy that proves if it’s broke, you might as well fix it.

I won’t rate the content yet since I couldn’t finish due to the incongruent narration. I will comment on the audio, though. There are two narrators, a male and female, but they were recorded in two entirely different studios with inconsistent quality. While the female narration is done quite well in a sound-proof room, the male narration is not. There is a tin-like echo to his narration as if it was recorded in a tunnel. The switch between the two narrations is quite jarring and not enjoyable. I stopped listening part-way into the first male POV chapter and will exchange for a better quality audiobook.

Look - I love Christina Lauren books. I look through Audible's coming soon list and add them to my wishlist months in advance...so far in fact that usually the book cover art hasn't been released.

This writing duo hooked me with their beautiful series. So much witty banter, such clever plot lines, and of course always some great steamy interludes.

With that said, I have to voice my disappointment with the books that have followed since the end of the wild series.

It began with Roomies. This is the book that is destined for the silver screen and I feel that since then the steamy scenes have been sanitized out of their books so that they fit this ideal of what a Hollywood rom-com should be.

I will continue to listen to Christina Lauren books because at the end of the day, this team tells a great story. The Honey-Don't List is no exception. I just wish they hadn't veered so far away from the books that made them successful.

As for the narration, both narrators were new to me and gave a solid 4 star performance. My only gripe was the slightly tin-y sound present in all of Jon's segments.

This was an incredibly slow book, where you’re hoping the build up will be worth it. Unfortunately, it led to no where. There wasn’t a connecting or interesting side story that kept this book going. Basically, it was a short story on rewind. I would think if you submitted this story to your professor in college you would receive a C- for lack of character development and a storyline that went no where. It was like ‘Groundhogs Day’, every chapter was the same.

I discovered the writing duo Christina Lauren a few years ago through their Beautiful series, which is still a favorite. I found The Honey-Don't List to have a lighter, more rom-comy feel. With the popularity of married design/build married couples dotting the pop culture landscape these days, it was fun to read about a duo on the staff of one of those couples. Carey and James were so fun together and just plain charming, especially when framed again the backdrop of nightmare bosses Rusty and Mellie. After I read the book, I purchased the audiobook. Patti Murin and Jon Root were new-to-me narrators, and I found both fantastic. It appears that this is a first work for both of them on Audible and I definitely hope to hear more from them in the future. I listened at my typical 1.25X speed and it was perfect.

Overall: just a really fun, light listen- especially great for a distraction during chores/commute and such.

I especially enjoy the two voices narrating, and both are great. Every once in a while (and especially when life feels heavy), a romcom is exactly what I need. The Honey-Don’t List suits perfectly for that- 5 stars for: engages quickly, interesting characters, and great narration. Bonus points for some nuance that will remain unspecified to avoid spoilers- but perhaps you’ll notice them too.

This was the perfect sweet read. Like ALL of Christina Lauren’s books it plays out like the best romcom that you never want to end. I loved it!!!

This book had an interesting premise and I love it. The characters are alive. They jump off the pages.

Great book. It had an interesting story that kept me hooked. I listened to this book every day until I finished it because I was just waiting to see what happened next. It wasn’t too mushy, a good love story with important character building side stories. A must read!

Couldn’t get past chapter 4. Book seemed all over the place. Love these writers but wasn’t sure what they were trying to achieve.

loved it.It was hard to get into in the beginning but glad I stuck with it