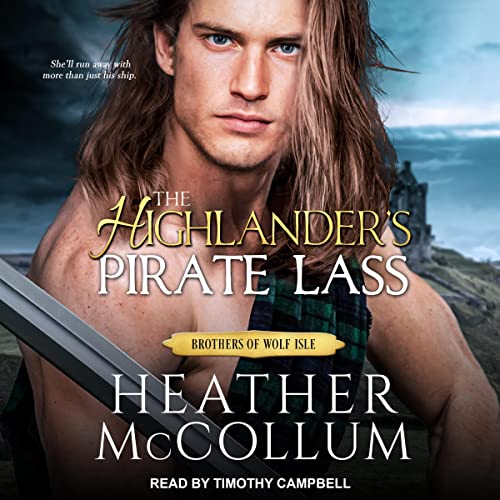 Eliza Wentworth is no lady. After the notorious pirate Jandeau murdered her family, she vowed to spend the rest of her life at sea, saving others. She'd rather be firing cannons than embroidering pillows - or worse, bowing to the demands of a husband. But when she's stranded on an island off the coast of Scotland, now she is the one in need of help. And that help comes not only from a man, but a man she struggles to resist.

Highlander Beck Macquarie has never met a woman like Eliza. He hasn't met many women, period, thanks to the blasted curse set upon Wolf Isle decades ago. To save the clan, he needs a wife and bairns, and rough-around-the edges Eliza is anything but wife material. She has no intention of staying once she's able to set sail again. He should let her go. But the desire between them is impossible to ignore.

When she asks Beck to teach her the ways of the bedroom while she bides her time on his island, he can't say no. As they learn more about each other, though, past trauma and secrets resurface. Now, Eliza must choose between the freedom and comfort of the only life she's ever known and sacrificing it all to save the people she loves...including Beck.

I've read the book already and believe I reviewed it at that time. Today I bought the audiobook because I wanted to hear Tim Campbell do another of his fantastic jobs of narrating. He did a marvelous job! 😍

Really liked this story. Beck and Eliza had good chemistry. Enjoyed that Adam and Lark made several appearances. I wish someone would just pull the damn knife out of the tree. Narrator Tim Campbell is one of the best. I love how he tells a story.

I absolutely love the narrator! He brings you right ty into the story. Even in the frankness of some of the speech, he is able to capture the characters moods and desires without compromising the scene he's reading. A good story. 👍

New series. Only book one and two are here now. More to come soon I hope.

I enjoyed listening to this audiobook with a good story and great narrator! Thank you!

This was an easy listen, and better than many other books in this genre. Didn’t blow me away, but I’ll probably get more in this series and by this author.

can't wait for the next book. I'm sure it will be just as good as these two were. It's just a shame I've got to wait so long, as this one has only just come out. But at least when it does I'll have to listen to these again to refresh my memory . It was different,funny Aith a little naughtiness. Found myself laughing quite a bit.