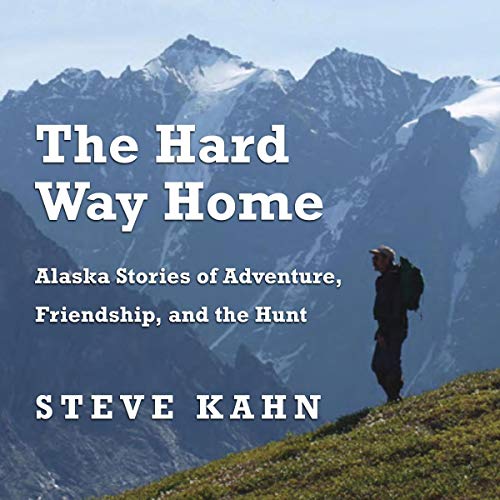 A lifelong Alaskan, Steve Kahn moved at the age of nine from the “metropolis” of Anchorage to the foothills of the Chugach Mountains. A childhood of berry picking, fishing, and hunting led to a life as a big-game guide. When he wasn’t guiding in the spring and fall, he worked as a commercial fisherman and earned his pilot’s license, pursuits that took him to the far reaches of the Alaskan wilderness. He lived through some of the most important moments in the state’s history: the 1964 earthquake (the most powerful in US history), the Farewell Burn wildfire, the last king crab season in Kodiak Island waters, the Exxon Valdez oil spill and cleanup, and even the far-reaching effects of the 9/11 attacks.

The essays in The Hard Way Home offer a view of Alaska that is at once introspective and adventurous. Here we find the state’s plants, animals, people, geography, politics, and culture considered from an intimate perspective, yielding hard-earned lessons about conservation, sustainability, and living well. An irrepressible guide, Kahn invites listeners to share his experiences and discoveries and to consider questions about a place, and a life, that are disappearing.

"Alaskan Kahn has written a series of heartfelt, yet understated, essays about life on the Last Frontier that will appeal to nature lovers and thoughtful outdoorsmen and outdoorswomen." (Booklist)

"Perfect for outdoor enthusiasts, anyone wishing to learn about life in the wilderness, and those interested in Alaska history." (Pacific Northwest Quarterly)

"A fine read for anyone who wants to understand Alaska better...highly recommended." (Midwest Book Review)

The story is read by a man with a drab and mono tone voice. Hard to listen to…

The brief stories are shallow and mostly uneventful. The storyteller has virtually no influx in his voice and speaks through a nasal mono tone voice that makes a simple story even harder to listen to.

a little too political. very unenthusiastic narrator. overall, as an outdoor enthusiast, I would not recommend this book.

Great stories but horrible “reading”. Narrator is just reading. I’ve heard other narrators who were enthusiastic and really kept my interest.

Thoroughly enjoyed this audiobook, the narrator even sounded like a grizzly old mountain man ( no offense) A life well lived.

For those who like real-life adventures, this is a great buy - interesting stories with a great human element to them.
Mr Malhiot's performance was a pleasure to listen to.