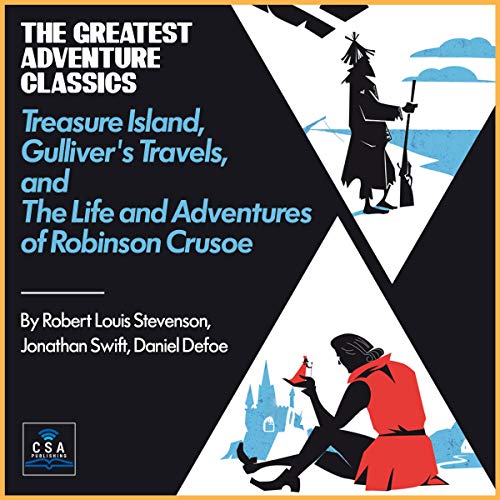 What starts with young Jim Hawkins meeting a beggar and ends in a climactic battle between him and one of the most infamous villains in literature — Long John Silver — has long been revered as the ultimate pirate adventure story. This non - dramatized classic will sweep you off to a world of sly and savvy seafarers as the young Hawkins navigates treachery, assassination and the ominous prophecy of the black spot in the greatest treasure hunt known to literature.

“Fifteen men on a dead man’s chest— Yo-ho-ho, and a bottle of rum!”

Storms shipwreck and strand an unfortunate surgeon on a series of four fantastical lands; among them he finds an island where six-inch-high natives maliciously plot Gulliver's death and where majestic horses rule over enslaved men. An enchanting fantasy for all, Gulliver’s Travels not only entertains, but enlightens: the careful reader will recognize this classic as a witty parody of political life in 18th-century England.

I really enjoy this bundle. These were some of the books that I always wanted to read but didn’t get to as a child. With Audible, I’m able to do this freely and listen while laying down, without having to flip a page. The audio is good, and I would definitely recommend this to any book lover.

Just started, and love it.

I’m still on the first book, Treasure Island, and I really enjoy the narrator’s enthusiasm and style. Really looking forward to listening to more !

I really enjoyed reading these books in high school, and I was very happy to find them all together in a fun collection. I recommend these to anyone looking to listen to the classics :]

Roberto, did an awesome job narrating. I'm very impressed and excited to finish the collection.

These are some of the most timeless classic books I grew up reading, Treasure Island being one of my favorites of all time. I was very happy to see that a compilation like this existed. This is a great bang for your buck because you get the benefit of multiple books in one. The narration was spot on and very captivating. What a great way to relive the classics in an audiobook form! I would highly recommend this.

Tremendous value! 100% recommend. Narration is soothing and the stories engaging. I absolutely love these stories.

Great stories to get lost in.

The narrator is good. The stories are delightful. Nice long listen but we'll worth it. The three stories come together well.