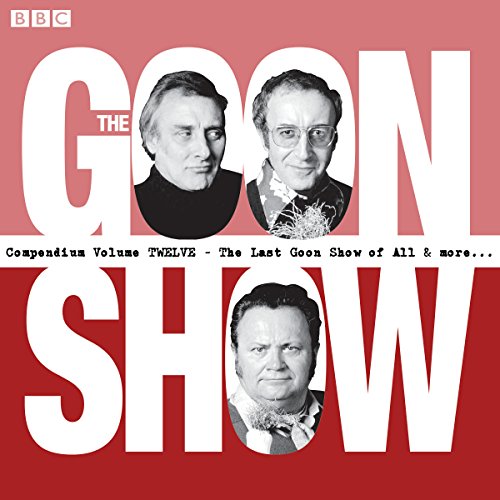 The Goon Show Compendium Volume 12: The Last Goon Show of All & More

Spike Milligan, Harry Secombe and Peter Sellers star in 10 rare episodes of The Goon Show, plus a plethora of bonus features.

This twelfth collection includes the episodes 'China Story', 'Foiled by President Fred', 'Tales of Old Dartmoor', 'The Macreekie Rising of '74', 'Robin Hood', 'Six Charlies in Search of an Author', 'Insurance - The White Man's Burden', 'The Red Fort' and 'The Missing Ten Downing Street' (aka 'Ten Downing Street Stolen'), along with the 1972 reunion 'The Last Goon Show of All'.

Also included are numerous bonus archive items, including celebratory programmes Parkinson Meets The Goons and Heroes for a Time: 6 - The Goons. Here, too, are interviews and features taken from The Best of British Laughs: Peter Sellers, Robbie Vincent's Late Night London, It Takes All Sorts and more, as well as extracts from unedited studio recordings and rehearsals.

Remastered using newly sourced material and the latest technology to give the best possible sound quality, these recordings are sure to appeal to all collectors of The Goon Show.

The Goon Show Compendium Volume 12: The Last Goon Show of All & Moreに寄せられたリスナーの声

Sometimes it's best( and very funny) to answer a question, with a question. For example, Call: "Any question(s)? Response: Do you play the saxophone?" With the incredible talents of these men, that becomes an elegant joke.
Being able to hear what they created more than 60 yrs ago is a joy. But, why this 11 plus hr compilation contains only 6 hrs of original material, has no funny follow up.

I may be mistaken, but I believe this recording plays several of the same pieces, more than once. So 6 hrs of original work is presented over almost twice that time.

Presenting these geniuses of the absurd in this way makes no sense. It's a disservice that leaves the listener "hanging."
If Spike Milligan heard this, he might wonder: was this edited, by Ned C Goon?

Speak, Though You Only Say Eeee Yackaboo!

So, here we are…the end of it all, more or less — until the next volume and we go back towards the beginning.

“Do you play the saxophone?” “Only in the mating season.”

These collections have been exhaustive…and, I dare say, exhausting at times. The earliest volumes are mostly episodes, well restored (as they are here), and a tiny bit of bonus material, plus booklets (which most of the digital versions fail to provide.) At some point the compilers realized there was a ton of extra material available — documentaries, interviews, examples of other work by the core trio (though Ray Ellington gets his due here and there), excised continuity announcements and even outtakes and rehearsal material.

This set goes deep into the rehearsal vaults — unfortunately for “The Last Goon Show Of All,” an ill-advised attempt to revive and pay tribute to the series. The final show suffers badly from bloat and lethargy, and that goes double for the behind the scenes material. Two and a half hours goes to Parkinson and the droning “Late Night With Ian Vincent.” Not the most engaging package, then.

Lack of a PDF booklet is *very* annoying, as is the lack of chapter titling (an unfortunately standard issue with Audible releases.)

As always, it is great to hear the Goons.

Better still, do t bother with the bonus material and give us more Goon Shows!

Many thanks Spike Harry Peter

I was aware of the Goon Show previously and their influence on many other comedians after them and beyond and listening to them in the studio was both hilarious and warming to feel the connection between the three talents on show
I would recommend this title to anyone who wants to experience this unique and influential strand of comedy both in subtle and often cheeky terms give it a look and make your own mind up
I want to say a big thank you to Spike Milligan for bringing to life and sharing with Harry and Peter and of course all the planet his comedic genius
Much love to Eccles Nelly and not forgetting Bluebottle xxx
Fatang!!!

poor not worth the money