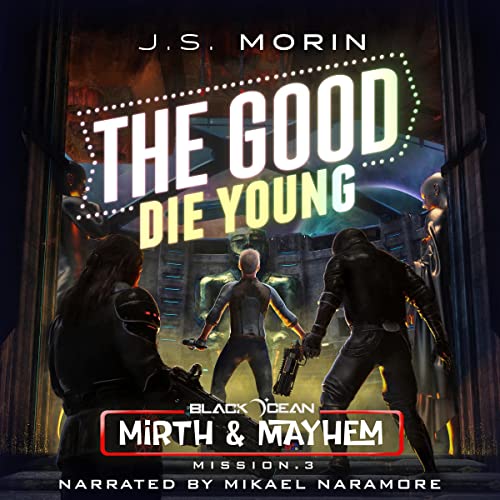 It seemed like a safe enough gig. A week aboard a One Church missionary ship. Bland entertainment for respectable money. A place where the family could relax and let their guard down.

Until the pirates attacked.

Alone in alien space, the missionaries are sitting ducks. When the hijackers commandeer the vessel, Mort and the Ramseys get split up. Each has to handle their own problems, whether that's telling jokes to keep murderous aliens amused, trying to collect all the kids with at least one parent, or refraining from wrecking an entire starship with magic.

If you take over a ship with enough people aboard, a few are bound to slip through the cracks. And one of those just might be a teenager with little respect for authority and none for the pirates who've taken his family hostage.

The Good Die Young is the third mission of Black Ocean: Mirth & Mayhem. It follows a mismatched duo of itinerant comedian and outlaw wizard as they roam the galaxy trying to eke out a living and stay ahead of the consequences of their actions. Black Ocean: Mirth & Mayhem looks back at an earlier era in the Black Ocean universe, and returning readers will get to see how some of their favorite characters came to be. Fans of morally gray heroes and slick talking conmen will love this series.

Grab your copy before someone else does.

This was yet again another wonderful escape.

This prequel series is as good as the main Black Ocean series. Truly a masterpiece and narrated by the best.