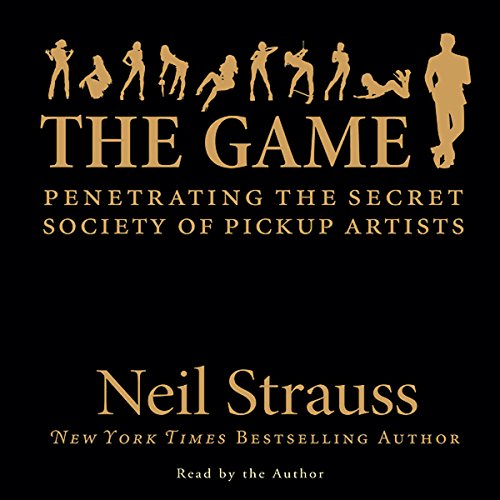 Hidden somewhere, in nearly every major city in the world, is an underground seduction lair. And in these lairs, men trade the most devastatingly effective techniques ever invented to charm women. This is not fiction. These men really exist. They live together in houses known as Projects. And Neil Strauss, the best-selling author, spent two years living among them, using the pseudonym Style to protect his real-life identity.

The result is one of the most explosive and controversial books of the year -- guaranteed to change the lives of men and transform the way women understand the opposite sex forever.

On his journey from AFC (average frustrated chump) to PUA (pick-up artist) to PUG (pick-up guru), Strauss not only shares scores of original seduction techniques but also has unforgettable encounters with the likes of Tom Cruise, Britney Spears, Paris Hilton, Heidi Fleiss, and Courtney Love. And then things really start to get strange -- and passions lead to betrayals lead to violence.

The Game is the story of one man's transformation from frog to prince to prisoner in the most unforgettable book of the year.

Won't up your Game, but better than reality TV

People are likely to have strong feelings about this book, from disgust to bemusement to desperate interest on the part of the AFCs ("Average Frustrated Chumps") that Strauss talks so much about, after confessing to being one. However, it should be understood that this particular book is a memoir and an expose by a Rolling Stone journalist, not an actual pickup Guide. While Strauss talks a lot about the "seduction techniques" he and his fellow PUAs (Pick-Up Artists) developed, this isn't a self-help guide for teaching them. (If that is what you're looking for, Strauss still runs a company call "Stylelife Academy" which sells workshops and DVDs and coaching, etc.)

I listened to this book (narrated by the author himself) because of course I have heard of these "Pickup Artists" and while I have no interest in playing "the Game" or becoming the sort of person they describe, it's an interesting, fascinating, somewhat pathetic subculture, but it's also instructive. For example, feminists tend to react most strongly to PUAs and their philosophy, which tends to treat women as puzzles you have to unlock. Get the right combination of words and gestures and you score. It's obviously dehumanizing in its implications, and Strauss keeps going back and forth, admitting on the one hand that PUA lifestyle is dehumanizing and tends to lead to misogyny, but on the other hand, defending the poor involuntary celibates who are just looking for love and can't figure out why what they are doing isn't working.

The more interesting thing (and possibly infuriating, fascinating, or disturbing, depending on your POV) is that it's evident that these routines work. It's not mind control or a secret passcode that will get women to have sex with you, but Strauss and his PUAs really have figured out a series of approaches that can be executed in an almost algorithmic fashion, and which elicit desired responses (i.e., interest, arousal, disinhibition, etc.) The key to it is that they are playing a numbers game, which means getting over the natural aversion most people have to making countless approaches and being rebuffed the vast majority of times, and perhaps more importantly, they are looking for certain types of women and certain types of relationships. After spending a couple of years in this lifestyle, Strauss becomes weary of it because he and his posse are living like unwashed bachelors in a Hollywood mansion, with hot and cold running women, internecine catfights (male and female) over everything from relationships to money to household chores, and in the meantime, while PUAs do get laid a lot, very few of them wind up in fulfilling long-term relationships. Their original objective (getting a woman to bestow interest and affection and sex) has become an end in itself, and as Strauss describes it, the very process becomes addictive.

That said, listen to how he describes these techniques, and you can see that while most women will say "Oh, that would never work on me," in fact it does. I think what a lot of PUAs miss is that perfecting calculated psychological manipulation as an art and a science isn't gender specific - you could easily develop similar techniques to work on men, or for application outside the domain of romance.

Anyway, Strauss starts out his career as a PUA by attaching himself to a MPUA (Master Pick-Up Artist) named Mystery.

PUAs deliberately dress flamboyantly and outrageously, in a way no real person would dress when not cruising for chicks on the Sunset Strip. (Keep in mind that these guys, in the book, are mostly operating in Hollywood. You can do this in LA or Vegas or NYC - I suspect they wouldn't advise you to "peacock" in quite the same way if you are trying some Game at your church social in Boise.)

Mystery, it turns out, is a mess, and that's true of pretty much all the PUAs. None of them start out as "alpha males," which is why they do so much posturing to convince everyone they are one. Most of them are really sad, damaged little boys. This shows itself over and over again as no matter how much Mystery and Strauss score, inside they are still the same old insecure, needy guys seeking female approval that they always were.

Strauss's account of life in the PUA community makes it easy to see how they'd attract a certain sort of person, and yet it doesn't seem to lead anywhere but emptiness. But there is more to them than desperate guys trying to get laid. Strauss manages to use his "Game" even on celebrities. In the presence of Tom Cruise, he sees a true alpha male; Cruise may be a Scientologist wacko, but he's also a genuinely charismatic and forceful personality. Strauss ends up sharing a house with Courtney Love for weeks, dates one of her band members, and during an interview with a very bored and uncooperative Britney Spears, uses his PUA techniques to turn it around and have Britney eating out of the palm of his hand.

It's also funny when he talks about the splintering and franchising of PUA "Projects," particularly towards the end, as Strauss goes cruising Hollywood bars and finds all the women reacting with bored amusement to his lines, which have now been disseminated so thoroughly that everyone has heard them.

This book isn't going to help you with your love life, but it's a fascinating look at psychology and a subculture that seems most fit for reality TV shows.

The narration by the author was a poor choice, as it often is. Strauss speaks clearly enough, but his cadence is very monotonous, as he breaks each sentence into parts, speaking in regular beats that become an irritating pattern over time.

An Interesting Trip Through the Culture

It's a weird story riddled with shameless sexual descriptions of "conquests" in the first half, followed by a rise to the top and the benefits it brings in the third quarter of the book, and then a sobering fourth quarter where the sex parts are downplayed in favor of discussing feelings and conflicts on interest.

I give it four stars for being unlike any audiobook I've ever gone through.

Any guy can read this and take something from it, it's more than just about picking up women it's the life of these pick up artists and the lessons learned overtime.

I found this book fascinating. A trip to a transformation of most guys' dreams, but one that comes to a realization of the emptiness of conquests only.

I read this over a year ago, but it's one that sticks with you. A quick synopsis from memory: Strauss, a reporter for Rolling Stone, decides he's tired of losing with the ladies so he signs up for some pickup artists' courses. He becomes somewhat of a mythical figure in the pickup society, and, if you've ever seen Strauss, you too will be awed by the ladies with whom he got lucky.

The book is the story of his transformation (the good and the bad and the ugly) and a quite the psychology course in the female mind in matters of love or luck or lust.

The stories in this book are simply incredible. But all true, from a guy (a reporter) who knows he'd be called out if he embellished or lied in the book. And, when I look back on those long ago days of a quarter century ago when I was single, I would have then given anything to know the secrets of Mystery and his Method.

While Neil Strauss is no hero to NOW, he gives hope to the homely, the lonely and the down and out in love, at least to the guys that fit this bill.

I cannot give Strauss' performance 5 stars though. He's just way too in love with himself.

This book taught me so much over the last few days, about love, social interaction, and the pitfalls of taking it for granted... A must listen!

Loved every second of the book. Obviously interesting topic of the pick up world, with great celebrity insights, and on top of that incredibly well written. A must read book!

Another great one on social dynamics and how to create attraction. This is a must have. I would also check out Neil's other books if you are looking for more good stuff. Try "Rules of the Game"

This book is a well-written, honest account of the author's personal experiences as a pick-up artist. Neil Strauss takes us into a world of young adults (both men and women) whose low self-esteem leads them into a life of self-destructive behavior. People of all ages (and both genders) will benefit from hearing his story.

I wish I could get my money back.

quite boring. I couldn't even finish it. I tried listening while driving and its better than xanax for a sleep tool. its not my thing. a friend said it was good and ill no longer be taking his recommendations of course.

Author acts like he's unveiling some universal truths but really just his warped perception. what are we supposed to learn or take away from this? waste of time.