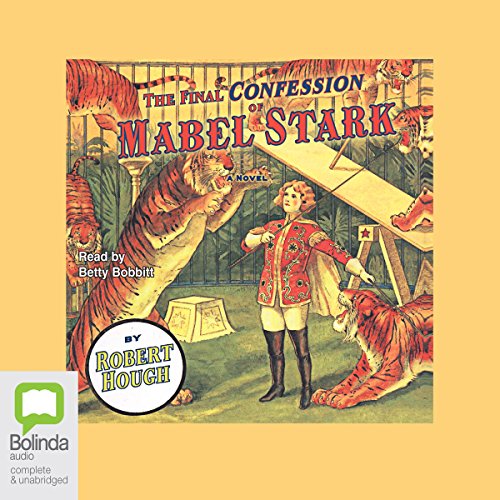 "A marvelous debut narrated with delicious humour and warmth. Just about perfect. One of the most entertaining novels in many a year." (Kirkus)

Barely five feet tall, suicidally courageous, obsessed with tigers, and sexually eccentric, Mabel Stark was the greatest female tiger trainer in history. Clad in her leather suits and married five times, she was the Mae West of tiger taming. In the 1910s and 1920s, when circus was the most popular entertainment in America, Mabel Stark was the biggest attraction for the Ringling Brothers Barnum & Bailey circus.

This vibrant and moving fictional autobiography begins in 1968. Mabel is turning 80 and is about to lose her job. Faced with the loss of her beloved cats, she looks back on her life, her escapades and tragedies, her love affairs with tigers and men. She confronts her darkest secrets, her guilt at committing "the worst thing one person can do to another". Now, with the end of life in sight, there is one thing above all else she needs to do. Mabel wants to confess.

Exuberant and inventive, The Final Confession of Mabel Stark transports its readers to the carnival world of the Big Top to an age before cinema and television, when circus performers were superstars.

Within seconds, listeners will realize there’s no one more fit to perform this wild and magical biography than veteran narrator Bobby Bobbitt. With her slight twang and raspy authority, Bobby brings to life Robert Hough’s fantastical version of Mabel Stark’s moving story. The Final Confession of Mabel Stark is an inventive and clever combination of fact and fiction, as Hough’s Mabel looks back on her life as one of the greatest tiger trainers in history. Full of all the romance, tragedy, and conquests that is associated with the real Mabel Stark, this audiobook is an extraordinary marriage of fact and fiction that will have listeners glued to their headphones.

The Final Confession of Mabel Starkに寄せられたリスナーの声

What an incredible idea... to take the known events from the life of an historic figure and, through research, empathy and imagination, create a novel that reads as though it were that figure’s autobiography. This is what Robert Hough has done with great success in “The Final Confession Of Mabel Stark.”

Working with tigers is a hazardous undertaking. So is setting out on your life adventure as an uneducated orphan. Both left huge scars on Mabel Stark. These scars, emotional and physical, create the theme of the book. With each trauma, Mabel learned more and grew as a person – at least the fictional Mabel did – and for that reason one has to cheer for her and ultimately empathize with her final heart break.

One also has to cheer for Mr. Hough whose visual metaphors, colorful ‘Kentuckyisms’ and ear for dialog created such a compelling book. The tale is incredibly plausible and the telling so convincing that you believe it is coming from the mouth of Mabel Stark – or that Mr. Hough spent years training big cats with a tent show.

Big applause is also due to Betty Bobbit, the actress whose reading brings Mabel to life so vividly. She was entirely believable as an old woman, born in Kentucky, looking back and examining the events and the emotions of a very tough and a very remarkable life.

A warning: Some people see a colorful dust jacket and a book about the circus and assume that it’s a book for children. It’s not. This book is fairly explicit in the way it deals with sex and while that shouldn’t be a problem for most adults, I would certainly not recommend it for the nursery.

For the first hour I was convinced this was an autobiography read by the author! I had to double check to see it was fiction written by a man. The "voice" of the writer and the voice of the narrator are perfectly matched for this fictional account of the real "lady with the tigers." It's rather raunchy, much as if it were written by the Mae West contemporary that Mabel Stark was.

In addition, it reflects an empathy with animals that made it a perfect follow up to "Animals in Translation" which I read last week. When Stark was training tigers she had no models to follow, and no psych books to read, just pure instinct and self-preservation.

Fiercely feminist historical novel. not for the faint of heart. The book includes a great deal of sex (not all of it pleasant or consensual), self harm, and early 1900s mental hospitals abusing women. Difficult subject matter but despite that the book is overall fun. Great performance by the reader..

This is the most entertaining book I’ve read in many years. Don’t miss it. I listened while driving across country and sometimes I was laughing so much I had to pull off the road.

I would have given it all 5 stars except for the jumping back and forth between time periods and the subject’s ages. It was very confusing and I didn’t feel as if the author did a good job of preparing me or “announcing” those time switches. It’s very hard with an audiobook to find places to go back and review facts. All this jumping around was very frustrating. Also, the book ended with her suicide waaay to abruptly. Nothing was discussed as to how she did it, who found her, what her last days were like, nor what might have led her to suicide. Again, frustrating.
I was so glad to have made the acquaintance of Mabel Stark! What an AMAZING woman!

I did not know what to expect, but it held my interest through the life of Mabel. She such violence in her early life with hospitalization where he she receives brutal treatment,but was saved by someone who loved her. True to life is those people who come into your life with kindness when you need it. At first the ending where she took her life was aa surprise, but she lived her life on her own terms. Perhaps an lol of her connection and support systems 😭

If you could sum up The Final Confession of Mabel Stark in three words, what would they be?

Mable Stark, it was her biography

Who was the most memorable character of The Final Confession of Mabel Stark and why?

This reader was spellbinding. Could have done with out a little of the sexual content, didn't add anything to the story, but it entire book was delightful.

One of the Best

As an English professor, I've read many novels. This one, which I had never heard of, surprised me. It was wonderful, and I loved Betty Bobbitt's voice! I highly recommend it.

could not stop listening

I loved, loved, loved this book. I was listening to it while driving across several states, and it was painful to have to stop to eat or sleep, because that meant not knowing what happened next in the story. Will listen to it again.

an interesting romp thru 20's and 30's Circus

Yes, there were parts that dragged a bit, but then, this is a fictionalized bio of a real person. I could not put it down. I thought it was quite well done and would like more on the subject.

Book of the Year

This book is absolutely fabulous! The development of the protagonist, Mary/Mabel is cleverly crafted, taking the listener on a journey of emotions towards her of innocence, admiration, pity, elation, fear, and pride. By the time you're half way through this title, you feel as if Mabel is your own long-lost great-aunt! The circuses of the 1920s and 30s must have been incredible and seeing circus life through Mabel's eyes gave it an intimate touch. The narrator plays a large part in the success of this story, in my opinion, with her intonations and amazing accent! I have to admit to sitting in my car, in the garage, long after arriving home in order to hear the end of a section! My Book of the Year!

This book has long been a favourite of mine and I have read it probably three times in print so I was rather apprehensive to try the audio version. We've all had experience of a terrible narrator mangling a beloved book, haven't we? I need not have worried. In fact Betty Bobbit's performance - for it is a performance rather than bare narration - adds so much to the depth and characterisation of the story that I will probably not go back to the print version. And what a story it is - madness, murder, maulings; typhoid, terror and tiger sex, all set in the American circus in its "golden age" of the early twentieth century. What more could anyone want? The fact that this is a true story just makes it more fascinating. In fact this book, together with "Water For Elephants" by Sara Gruen, has made me eager to read more about the history of the circus. I absolutely unreservedly recommend this audio book as one of the best uses for anyone's credit. Raaaawrr!