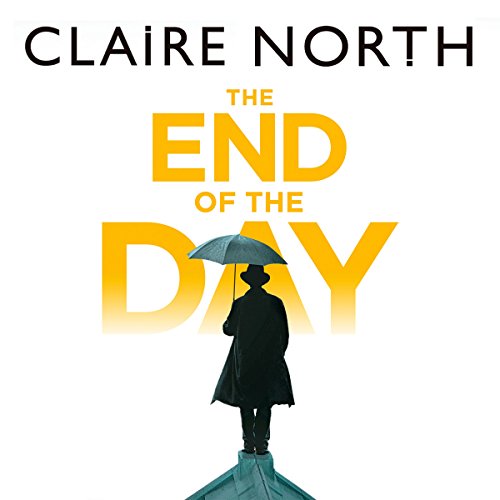 Charlie meets everyone - but only once. You might meet him in a hospital, in a war zone, or at the scene of traffic accident. Then again, you might meet him at the North Pole - Charlie gets everywhere. Sometimes he is sent as a courtesy, sometimes as a warning. Either way, this is going to be the most important meeting of your life.

The End of the Day is the stunning new story from Richard and Judy Book Club author Claire North: the voice behind the word-of-mouth best-seller The First Fifteen Lives of Harry August.

The End of the Dayに寄せられたリスナーの声

There is no story here

Monday, September 16, 2019:
I am half way through the book, and IF I manage to finish it, I will update this review.

This is nothing. Read the blurb again, and tell me if you find even a hint of a story. Don't bother, you can't. There is none. I am on chapter 63 now, and nothing has happened other than Charlie running around visiting people about to die.., and we've only witnessed one actual death.

This is just a dull travelogue. There is nothing here.

I LOVED her other book 'The First Fifteen Lives of Harry August'. I keep recommending that one to everyone.
I cannot recommend this book, however. I cannot imagine it getting good enough at the end to recommend at all.

This book is boring me to death.

It doesn't go anywhere! Zero narrative tension- so unlike all her other books. Beautifully written and excellent narration by Peter Kenny.
But the fundamental problem is that you give up caring about any of the characters. There are A whole series of vignettes one after the other which don't go anywhere. At all.
I tried and I tried but after 60 chapters I gave up.maybe I'm just someone who likes a story

A long story about nothing

If this book wasn’t for you, who do you think might enjoy it more?

I'm sure someone will like this book - maybe someone who likes long drawn out stories that do not have a conclusion.

What was most disappointing about Claire North’s story?

On the description this book looks like it would be perfect for me - sadly it wasn't. It was long and rambling and repetitive, I stuck with despite being bored and wondering what the point of this book was - I kept going because I thought there would be an ending that would put everything into perspective - or maybe some twist at the end - but there was nothing, it fizzled out to an anti-climax of the highest magnitude and I wished I had never started the book.

I have no criticism of the performance - the narrator did a good job with a dull book.

What character would you cut from The End of the Day?

I wouldn't cut any character from the book - I'd just like these characters with a strong story line and a real purpose.

This book would have been great if it was a short story - but as a long non eventful book it is dull and pointless sadly.

I have read all of Claire Norths books and would thoroughly recommend them, particularly the first fifteen lives of Harry August. However, this book is terrible. The idea is good, a character being the harbinger of death and other characters playing horsemen of the apocalypse in a tongue in cheek way. I think the idea is similar to some if Terry Pratchets work but nothing like as good. I persisted for three to four hours but gave up in the end. I rarely return books but I will be returning this one.

Peter Kenny does his best and again, I would thoroughly recommend his work. The book just doesn't seem to have any spark. Shame. I will await Clare Norths next book and hope it's back to her normal standard.

I finished this one today, and while it would be more logical to wait until I've absorbed this book a bit over the next few days, I feel the need to get something down.

First of all - the familiar. This is another high-concept fantasy set squarely in the modern world. As usual, the globe is suitably trotted. Our hero visits (among other places) Greenland, Belarus, the USA, Nigeria and London. And he is a bit of a hero, as well. He's Charlie, the Harbinger of Death, originally from Birmingham and working for an office in Milton Keynes and.... he goes before. If that concept sounds a bit Terry Pratchett, it is, but that's pretty much where the comparison ends.

Some of the satirical elements evident particularly in the Sudden Appearance of Hope are here too - the book is very funny in places and horrifying in others. The main torture scene towards the end of the book is so sustained and well drawn that it's quite shocking. Elsewhere, however, the usual thriller elements are largely absent, replaced by an episodic but fascinatingly melancholic meditation on (it seems to me): Mortality, humanity, and the human spirit. It's also a book that could only have written during this turbulent last year. Brexit is mentioned and while Trump isn't, the system that elected him is. The death of reason is an important theme, particularly within the context of the irrational destruction of the earth in the name of big business.

Much is left unsaid and unexplained in the book, and I'm still dissecting what it all means, so for now I'm giving it a "cautious" four stars, since the ride is, as always, magnificent, even if the end result might not be quite as profound as Claire / Catherine wants it to be. But then again it might be. Five starts go to the great Peter Kenny, who delivers what must be the performance of his career. The man is a virtuoso, plain and simple.

Claire has yet to come up with another "concept" as clever and mind-bending as that in he First Fifteen Lives of Harry August, but this new book is definitely a more mature and confident piece of writing.

So, er, anyway, I liked it. I'm just not quite sure how much yet.

This is an odd book. Almost stream on consciousness. Little happens in terms of a linear story line. Rather it is a series of episodes from which the reader is expected to draw their own conclusions.
I would suggest that this should not be read by anyone who is depressed. I found it very hard work and nearly did not bother to finish it.

Not as hoped for

I have very much enjoyed Clair North's previous work, and bought this on the strength of that, plus the premise which seemed interesting. Having got over halfway through the book it seemed to be a series of colourful but directionless vignettes, and my concern that it would continue in this vein led me to check other reviews. This then led me to make the difficult decision to abandon (and return) this book.

I look forwards to more books from this author, but will make sure I check reviews first. If you are buying this because you liked Harry August, I suggest you pause and do a little research of your own.

not my cup of tea

this just really want anything like the style of Fifteen Lives. I was eager to read another Claire North book but truly did not enjoy this one. there was so much random and unnecessary profanity. I got bored and wanted actual text to listen to. the swearing increased as the story went on which really drove me away. so disappointing

Maybe for the more complex reader(listener)

I really struggled to keep my attention focused on this one unlike the other 3 Claire north books I have listened to and thoroughly enjoyed. This is not a casual pick up put down book ! Be prepared to concentrate

Stopped not even halfway through

This has to be one of the dullest books ever.

There wasn't one character to care about. The plot is non existent, seems to have no point to it at all.

I feel like the author didn’t take this concept as far as I wanted. I liked the main character and I enjoyed the style of the writing - the half finished sentences and thoughts felt quite real but I wanted more from the story.