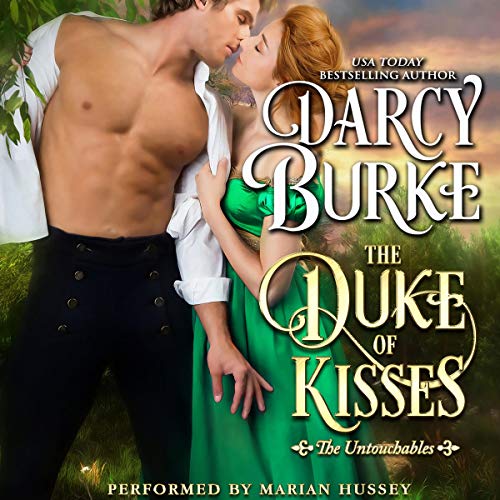 The Duke of Kisses

Frances Snowden can hardly believe her good fortune when she’s whisked away from her boring life by her sister who is now a duchess. Instead of becoming the third wife of her parents’ stuffy neighbor, she can be anything she wants: a doting aunt to her newborn niece, a debutante in London, or even an independent spinster. But when she meets and kisses a mysterious man on a walk in the countryside, she knows exactly what she desires - him.

David Langley, Earl of St. Ives, is resigned to marrying the dull woman his parents chose when he was a child. His future is suddenly, and happily, diverted when he encounters a captivating young woman who shows him everything he’s been missing.

Ready to embark on a blissful life together, a long-buried feud between their families makes their marriage impossible. Nothing is more important than duty and family, but can he turn his back on love?

I am starting to avoid books that are self-published, as they really require an editor's review to make them good. This book is published by the author, so I doubt anyone took a second review before it was launched. The heroine's best friend changed from being Prudence to Patience somewhere in the middle...really!
I think the author should start another series, as this one has gotten old and boring. The plot is simple, but there are some parts of the back story ( the family feud) is a little complex and difficult to understand. It does not help that the heroine's sister Ivy ( from an earlier book in the series) is called Mary by her parents. Some of the most interesting aspects are just referenced. The dialogue ( and usually I love a book with this much dialogue) is stif and dull. There is just no spark that makes you want to keep going. I have stopped it 8 times with no real desire to go back to it. I have even read 2 other books during those breaks. The h/h act out of character for the time and their situations. It is a series of unrelated events. Since there is always a HEA, the journey there should be exciting, as the ending is a given. This plot drones on and never comes to life.
I bought it because of the narrator. She is excellent as usual, but the dialogue is not good enough for her to really sparkle.
I should have stopped with this series a few books back, but at least I have learned my lesson. I would not recommend this book. I read 2 Amanda Quick novels in between the start/finish of this one.....and that was the best part of this novel, it bored me enough to go back to some much loved books.

It's really hard for me to determine out of all 11 books which one is my favorite. I think it had a bit of adventurous moments I love the part where the Uncle was trying to kill her, which is quite far from the way Darcy Burke writes her books. I love the love theory I love thee Ties that see knives mother tried to put between him and Fanny. It would be a big disappointment F Darcy Burke ends on both 11 I can only wish that she continues the series. There so much more to the story that can be added.

The funniest of them all, but still my favorite series

You really need to start in the beginning with this series and read them in order. It is really hard for me to really get into a series with out getting bored along the way. Either the story loses my interest or they go and change the narrator to someone so boring, or sing song-ish. This had totally had me captured from book one. I started book one with the idea of cleaning and doing laundry. Now book 10-11 I have lost count, and my husband and children are getting annoyed to see me with the head phones on. Each story has a total different storyline. You think how in the world could a match come of that? Then Boom! It has it all humor, romance, some are mysterious. This is one of my favorite series, and Marian Hussy is so good with the narration, I will look for more of her books for sure.

This is one of the best of a very long series! I was starting to give up and then I found this one!

A glorious romance between David and Fanny and the intrigue made it fascinating.

I only wish I knew what was so important about Miss Stokes and the reason David's father made him promise to marry her.

Furthermore, it helps to be accurate regarding locations. I live in Suffolk and work in Cambridgeshire. It takes 1 hour by fast car to get for St Ives to the Suffolk border, so who knows how long it would take by horse or carriage!

In this story we have meddling family members, who, if they were mine, I would happily divorce myself from just for sanity's sake.
Don't get me wrong, there are a few family members in the story who are really very helpful and nice to know, but unfortunately it is the 'nasties' that make the story what it is besides the delightful romance that blossoms and blooms.
I loved it all, the story, the characters, the narration - all of it great entertainment!
I listened to an audiobook copy and my unbiased review of it is given voluntarily.