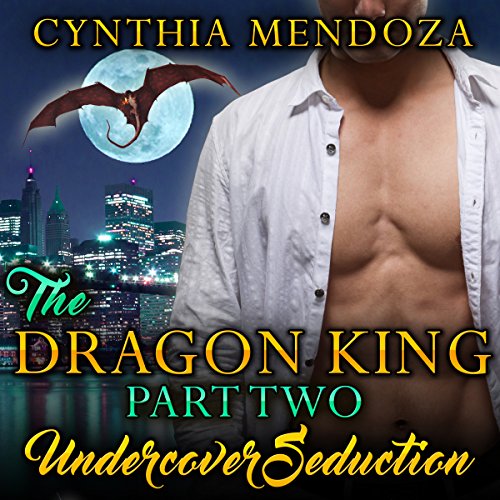 An alpha dragon shifter and a curvy undercover officer to tame him.

Deep in the heart of Los Angeles, a clan of dragon shifters has taken over a city as the local mafia, terrorizing the city and creating a huge drug problem. On her first undercover mission, a curvaceous rookie for the FBI is sent in with one mission...to seduce the clan leader, become his mate, and convince him to move the clan elsewhere. If her cover is blown, then she's dead meat, but if she can't seduce him and become his mate, the city will never be the same again. Of course, she doesn't know the first thing about seducing a man, let alone a dragon shifter, but with her life on the line, she's going to have to become a fast learner, or die trying.

Are you ready for something a little more alpha than you're used to?

BOOK REVIEW.......
Very steamy. But needed more story to it.

“This audiobook was given by the author, narrator, or publisher at no cost in exchange for an unbiased review via Audiobook Boom.”

This is Part 2 of The Dragon Kings story. He discovers two things in this one. It is only 49 minutes after all. His two closest associates want his lover dead and his lover is a part of the FBI. What will he do with this information? Well for one thing he will make love to Lydia. This book was given to me by the author in exchange for an unbiased review.

I was provided this audiobook at no charge by the author, publisher and/or narrator in exchange for an unbiased review.
I purchased "Billionaire Romance: The Dragon King Part One: Flirting with Danger" and read it before reading this "The Dragon King, Part Two: Undercover Seduction."
I think the Rebecca Wolfe's voice fit well. The plot interesting, but there were a few things that didn't make the mark for me. First and most obvious, the length. No good story can be developed in less than an hour; each book living up to being a "Part" rather than a whole.
The characters went from meeting to being inseparable in like, two blinks. I believe this storyline has much more to offer and am sorry there isn't more meat on the plate.

I received this audiobook free for an honest review. This, Part two, should have just been in one book with Part one. I hate reading a chapter at a time in a separate book. It is so hard for me to remember the story when it takes a while for me to get the next book. I usually get one of them free and then have to buy all the rest. By then, I have forgotten the story. Too disconnected. I'm sure there is a reason the author does it that way. Anyway, the story was cute. Mafia vs. FBI. Only the scenario is not a typical one. The Mafia leader is a dragon shifter and the FBI agent is a new female on an assignment to make the Mafia leader move his gang out of town. Excellent light reading.

I was given this book in return for honest unbiased opinion. I truly love Cynthia Mendoza but me and 48 minutes just aren't working. I need more time and more story. The book is good but I think this is just me that feels like something is missing. I feel like these stories that aren't a full hour are just stopped in the middle of a chapter or something and its not a series but you are just left needing more. I mean not even a cliffhanger you just need more of the story. I can say that I enjoyed it but these books are too short for me. I still love Cynthia Mendoza just need the whole series when they are this short. Oh and the narration was pretty good as well!!

I just got this book today...I thought id just listen to a little part today and the rest tomorrow.. that's not how it turned out I listened to it all in one sitting.. I was so shocked at how much I liked this book.. I was feverously looking for the next book and was sad to see this was the 2nd book in the 2 part series...... I highly recommend!! The only downside was how short it was I want more!!

"This audiobook was provided by the author, narrator, or publisher at no cost in exchange for an unbiased review courtesy of Audiobookboom”