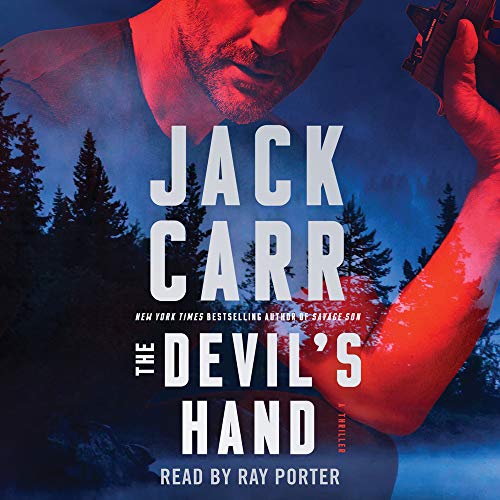 "Take my word for it, James Reece is one rowdy motherf***er. Get ready!" (Chris Pratt, star of The Terminal List, coming to Amazon Prime)

"They’re great, man. They lock you in. They’re gripping." (Joe Rogan, on the Terminal List series)

The fourth thriller in the “so powerful, so pulse-pounding, so well-written” (Brad Thor, number one New York Times best-selling author) Terminal List series follows former Navy SEAL James Reece as he is entrusted with a top-secret CIA mission of retribution twenty years in the making.

It’s been 20 years since 9/11, two decades since the United States was attacked on home soil and set out to make the guilty pay with their lives. In the shadows, the enemy has been patient - learning, and adapting. And the enemy is ready to strike again.

A new president offers hope to a country weary of conflict. He’s a young, popular, self-made visionary…but he’s also a man with a secret.

Halfway across the globe a regional superpower struggles with sanctions imposed by the United States and her European allies, a country whose ancient religion spawned a group of ruthless assassins. Faced with internal dissent and extrajudicial targeted killings by the United States and Israel, the Supreme Leader puts a plan in motion to defeat the most powerful nation on earth.

Meanwhile, a young PhD student has gained access to a bioweapon thought to be confined to a classified military laboratory known only to a select number of officials. A second-generation agent, he has been assigned a mission that will bring his adopted homeland to its knees.

With Jack Carr’s signature “absolutely intense” (Chuck Norris) writing and “gripping authenticity” (The Real Book Spy), The Devil’s Hand is a riveting and timely thriller that will leave you gasping for breath.

Jack Carr has cemented his place as one of the top espionage thriller authors. A few years ago I would have thought this book was good but not plausible. Now, completely believable and plausible. I don’t find Carr to be too preachy, like all people he has an opinion. Whether I agree or not he can express his through his writings.
Ray Porter does should receive an award for his narrating abilities.
This book has my HIGHEST RECOMMENDATION.
If you found this review helpful please indicate so.
Thank You.

With the release of THE DEVIL'S HAND author Jack Carr continues to cement his place at the top of espionage thriller writers. This novel wins an easy 5 Star rating. Narrator Ray Porter also earns 5 stars. Protagonist James Reece is rapidly approaching the name recognition of Jack Ryan and Mitch Rapp. For those who enjoy espionage thrillers this book and this series are must reads.

I love the first three books. Jack Carr showed a little right wing philosophy by demonizing democrats in the last books, but this one takes the cake. Like trumpers who have weaponized being democrats, Jack Carr has now delved down this path by using highly politicized rhetoric. I tried to keep going but by chapter 14, I realized he is no better than Alex Jones
Too bad. I loved the story just not his obvious hated of anyone liberal.

I have read all of Jack Carr’s novels several times in the last year during the COVID-19 pandemic and have tremendous respect for his world building and characters while pulling in from current events.

The Devil’s Hand kept me on the edge of my seat the entire way through and his commentary regarding Covid and possible future attacks on US soil following the pandemic both alarmed and enthralled me. My favorite novel of the series, the second and third acts will have you anxiously awaiting each twist and turn the story takes.

Cannot wait for the next novels.

Step in the wrong direction

Loved the first 3 books. First half of this one felt like a lecture then the actual story randomly started ~6hrs in

Decent story, but over the top

Heavy-handed with performance, repetition and detail. In desperate need of more and serious editing. I am fine that the author has a passionate perspective, but it borders on obsessed. In my view his impact would have been greater with less melodrama.

Spot on, SHELLEY AND WAYNE!

My FAVORITE REVIEWERS, SHELLEY AND WAYNE, HAVE BOTH SUMMED UP MY THOUGHTS AND FEELINGS ON THIS LATEST TITLE BY JACK CARR!! I REALLY CAN'T ADD ANYTHING TO THEIR SPOT ON REVIEWS!! I CAN ALWAYS COUNT ON BOTH REVIEWERS TO GUIDE ME TO THE BEST OF THE BEST ESPIONAGE AND THRILLER AUDIOBOOKS!! I APPRECIATE THEIR HARD WORK, ALWAYS TAKING THE TIME TO WRITE CLEAR AND INFORMATIVE REVIEWS!!! (GLAD TO SEE YOU BACK REVIEWING AGAIN, WAYNE!!)😁

It’s what is was hoping for. This book was worth the wait and it makes me even more happy and excited about the show coming out!!

Jack Carr delivers a great book once again. This might be the best one yet. Carr is in my opinion the best in the genre at the moment. His attention to detail is unmatched, and his insight into gear and strategy comes from real life experience. As a veteran this makes his books all the more appealing.
Ray Porter is magnificent as always.

The first half of this book is difficult to get through. No where near the quality of the first three books in the series. Ray Porter tries his best to save it but it is boring. For like 6 straight hours. Then the story picks up and it’s ok from there. Very disappointing compared to the rest of the series. Hopefully just a hiccup and the next one will go back to the quality of the first three.