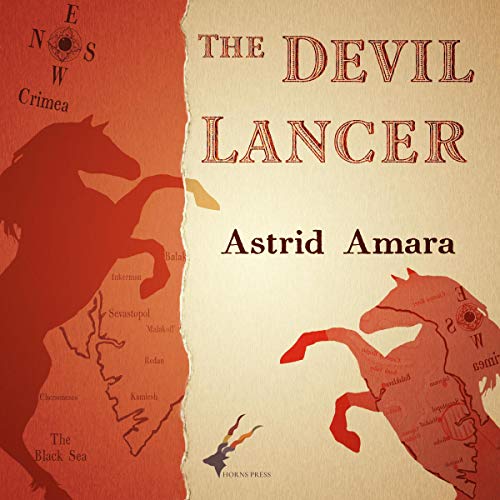 What should have been a swift and decisive summer victory soon drags into a harrowing winter campaign, and Elliott must rally disheartened men through sickness, battle, and starvation. But when he is assigned the additional task of spying on a fellow officer, the inscrutable Cornet Ilyas Kovakin, he finds himself disconcerted and fascinated by both the work and the man.

Rumors surround Ilyas Kovakin, the half-Russian officer who reports to none in his division. People say they’ve seen snakes slithering into his tent at night, that he has another face visible only in certain light, and a penchant for violent acts carried out in darkness, alone. But the truth that Elliot soon discovers is much more dangerous than mere superstition.

For Ilyas, his return to Crimea is colored with the horrors of his past. Once a mercenary, he has made a terrible mistake and inherited horrifying powers that he can barely control. He feels his hold over his humanity slipping away daily, and fears that salvation may already lay beyond him when the cheerful Captain Parrish catches his attention. Among men who hate him and superiors who covet his brutal power, Ilyas finds the young captain's charming company almost irresistible.

But Ilyas knows that the closer he is drawn to Elliott the more he will endanger them both.

Words cannot describe how much this audiobook blew me away! Don't go into this one thinking this is your every day sweet mm romance with a bit of war thrown in. This is a phenomenal story full of rich, diverse characters and a complex, fascinating plot! This was a new to me author and I must say that I am very impressed with their work! This narrator was also new to me and I thought he did a fantastic job giving voice tho these characters! It can't be easy with such a twisty plot and bold characters but he did a lovely job! Cannot wait to read this author and this narrator again!

Pertaining to the performance of the reader.

I was genuinely excited to cozy up and listen to this book to start off my day, but that became, very quickly, impossible as the reader reads so fast, mumbles, and combines words until I'm struggling to figure out what he is saying. There are no pauses between sentences, and if there are, they're rare! What a shame.

Wow, this book was so great, I didn't expect to love it as much judging by the blurb, but the characters, the conflict and the romance totally got me hooked. I dreaded it ending, but when it did, it was very satisfying. The performance was a little quick, but 0.85 speed fixed the problem. Also, Fox's voice for Ilyas was delectable.

Both the protagonist and his love interest are very well fleshed out, interesting and genuine people. Their chemistry was sweet and got me rooting for them a lot as opposed to just watching a couple go through the motions passively as it happens in most romances I read. What I cherished the most about it was that their sexuality wasn't advertised loudly by the narration, just implied subtly at first and then announced in a matter of fact way. Just a romance about two people who happened to be gay men.

The conflicts, both the mundane as well as the supernatural, were engaging and the stakes, even though they weren't world-shatteringly high, kept me listening with bated breath at times.

What also made the story stand out for me was the setting and the obvious care and love the author put into recreating the historical events. I've never even heard of this war before, but she made me care about not only the characters but the poor real soldiers who had to suffer in these terrible conditions.

Overall, 100% recommend it to anyone who isn't put off by realistic violence and gore. This was a joy to listen to and I will definitely do so a few times more in the future. Loved it!

A lot of potential

There was so much potential for an amazing book here, but it got a bit bogged down in historical war information and the pace dragged at times. The narrator wasn’t the best but with some work on his pacing he could be good - but it was distracting from the story in this case. Still plenty of good elements too, but it balanced out as an ok listen.