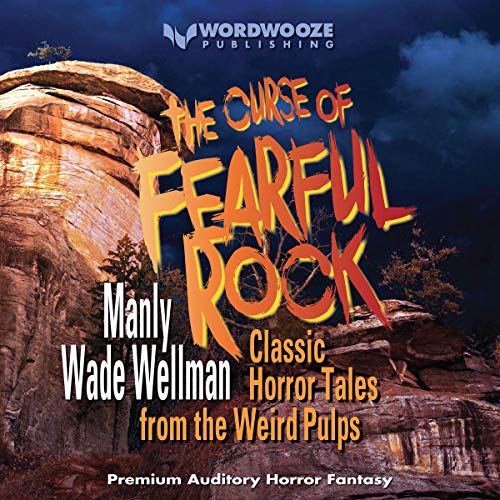 The Curse of Fearful Rock

Winner of the World Fantasy, Edgar Allan Poe, Ellery Queen, Locus and British Fantasy Awards, Manly Wade Wellman is considered one of the greatest fantasy writers who ever lived and is one of the creators of the great Weird Tales tradition.

An eerie tale of the American Civil War, and the uncanny evil being who called himself Persil Mandifer, and his lovely daughter, Enid, a tale of dark powers and weird happenings. The year is 1862, the place the Deep South. Enid Mandifer has been sent hypnotized by her stepfather, Persil Mandifer, to be a sacrifice to the Nameless One, a demonic presence who haunts an ancient house under the shadow of a natural pillar called Fearful Rock. Kane Lanark, a Lieutenant in the Union cavalry, who has been ordered to scout for Quantrill's infamous raiders, discovers Enid in a half-dazed condition on the trail to Fearful Rock. Kane is puzzled and repelled when he learns of her stepfather's strange worship.

Sergeant Jager, a religious fanatic known as "Bible" Jager to the other soldiers in their troop, and Kane's assistant, finds a horned image in the cellar of the house at Fearful Rock and destroys it, earning Persil Mandifer's undying hatred and his curse. After the Civil war, cosmic forces reunite all four at the foot of Fearful Rock, where the dead rise and events reach an eerie, shattering climax.

In the sequel, Coven, set several years later, Cole Wickett, a former Southern officer, who has lost everything in the war and become a tramp, drifts toward a small community he has heard of called now called Welcome Rock, where a minister named Jager preaches to all who seek refuge. There Wickett and Jager battle a coven of evil witches pledged to the devil, and find themselves opposed to dark beings wielding unimaginable powers. Forces only the spells from a strange book called "Long Lost Friend" can possibly defeat. If Wickett and Jager can survive long enough to use it.

The Curse of Fearful Rockに寄せられたリスナーの声

Shivers down my spine!

I am insanely impressed with the quality of these stories. Please ignore the fact that it has very little reviews. This book is a masterpiece and is a must have for every horror lover out there. A++

This was a great story told by a great narrator. I am not surprised it won so many awards. This was a very enjoyable read I have never read a horror set in the Civil War before which true Satan worshiper and the author alludes to it being a true story. The plot was original the narrator was awesome the read was great!

I received this book for free. I am voluntarily leaving this review and all opinions expressed herein are mine.

I don't like leaving negative reviews but, while I liked the premise of this story, I found the execution to be dry, lifeless and less than thrilling.

The narrator did a good job.