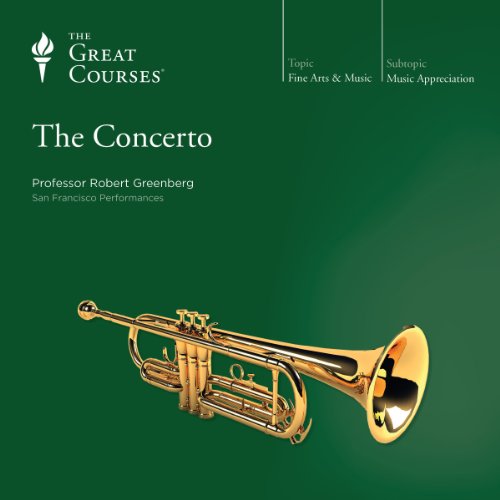 The concerto offers a kind of unique excitement no other instrumental music can match. Where a symphony enthralls us with its thematic variations and development, a concerto gives us human drama - the exhilaration of a soloist or group of soloists ringing forth against the mass of the orchestra.

In 24 musically rich lectures, Professor Greenberg provides a guided tour of the concerto, from its conception as a child of Renaissance ideals, through its maturation in the Classical age, its metamorphosis in the Romantic era, and its radical transformation in the 20th century and beyond.

You'll listen to selections from nearly 100 concerti from more than 60 composers - from Gabrieli to Gershwin, from Schumann to Shostakovich. Along with the bedrock of the repertoire - represented by Vivaldi, Bach, Mozart, Beethoven, Mendelssohn, Chopin, Schumann, Liszt, Brahms, Tchaikovsky, Dvorak, Rachmaninoff, Bartok, and many others - you are introduced to superb concerti by a host of less-familiar masters.

Finally, you'll look at some notoriously esoteric and difficult 20th-century composers, including Arnold Schönberg and Elliott Carter, learning how their music is much more accessible than it appears.

And I am finally entering the 20th century willing

When I began "The Concerto" I thought it would be a traumatic experience. After all, when I began listening to Dr. G's lectures I had only two favorites--Bach and Mozart. Gradually, as I listened to "How to Listen to and Understand Great Music," I began to see more stars on the horizon. They weren't as bright, but they made lovely music. So I took baby steps through the Romantic Era and "Oh-my-goshed" at Schoenberg--but then I heard "To an Angel" by Berg and "The Tree of Dreams" by Dutilleux and Bartok's "Concerto for Orchestra" and I liked them! I never expected to enjoy modern composers so easily. I guess Dr. G did change my mind and my expectations.

Better than "How to Listen to...Great Music!"

This course is indispensable for anyone who enjoys concert or symphonic music. Dr. Greenberg's _How to Listen to and Understand Great Music_ was my introduction to The Teaching Company. I saved for years to be able to buy that introductory course, and have listened to it over and over. "The Concerto" is better still, because every moment of every lecture is on point and fascinates me.

What was one of the most memorable moments of The Concerto?

As a huge fan of Prokofiev, I was delighted that Dr. Greenberg spends time on the Russians, and particularly on my favorite Prokofiev concerti.

It is hard to imagine any performance better than these two courses. The jokes (while silly, sometimes) are amusing and Dr. Greenberg describes music in ways that really help me listen differently.

As soon as I finished the course, I started it over again, for the sheer pleasure of learning more, going deeper, understanding ideas that I missed the first time.

I hope to be able to add more of Dr. Greenberg's courses to my audio library. "The Concerto" is a high point. I cannot imagine anyone being disappointed in this course. Get it! Listen to it! Enjoy it! You will thank me.

As (almost) superb as Prof. Greenberg usually does

Most of them, with great pleasure.

When he does an analysis of the musical theory behind the music.

It's amazing and wonderful, almost as usually. It's a pity that the fact that the potential listeners are from the USA makes him include too many irrelevant US composers in this survey. He usually keeps an exquisite balance of who really is/was who in the musical world history. Of course, there are some who are really worthy and should be here, but many others... By doing this, other composers of higher worth from other countries have been neglected sadly. Moreover, it's surprising how the Spanish (and American) composers are misrepresented, except the American composers born in the USA, of course. No mention of Héitor Villa-Lobos or Manuel de Falla, for example. No mention of Tomás Luis de Victoria or Antonio de Cabezón, two of the three most eminent composers all over Europe during the Renaissance. Or many others. In the survey lectures about The symphony, the Professor overrepresented as well some over-rated US composers (and also a few from the London colonies -just kidding, or not?), but in this survey he's gone way farther. The lecture about Elliot Carter I guess should have never been included, should he have made this lecture in 2017, and not in 2005. And he should have included some other names he mentioned but discarded. But in general, provided that this is a survey made by a USA company and a US Professor, it is not too jingoistic, at least not until when the lectures enter the 20th century... :-) Another detail : I would love and would buy immediately a course about &quot;Musical theory (and applied to masterworks), and some notions about the compositional compared methods by the great masters, for the layman&quot;, by Professor Greenberg.

After finishing this course, I have taken to googling the phrase "favorite concerto" and giving a listen to a broad variety of composers and styles. The lecturer has infectious enthusiasm for his subject, and in listening I gained both knowledge about and appreciation for this musical form. Thank you! Highly recommended!

I've listened to at least six of professor green
nbergs courses. I loved this one the most. while all are excellent I appreciate the virtuosity of many of these performances.

Good but not great

Anyone who follows my reviews knows I'm a big fan of Robert Greenberg.  I love his take on music and musical history, and while I don't always agree with him, I always find that he gives me something to think about.  He's persuaded me to give a number of composers a second or third chance, and for that alone I'd love his lectures.

I always learn a great deal from his courses, and find that when I'm fatigued by virtually every other audiobook I have available, I can turn to Professor Greenberg and be refreshed.

Aaaaannnndddd... I wasn't as crazy about The Concerto as I hoped I'd be.  Don't get me wrong, it's still an excellent course, but for some reason I found my mind wandering a lot during the later lectures in particular.  I gritted my teeth and listened to as much of Eliot Carter as I could and then hit Fast Forward.  Even the good professor couldn't convince me on that one.

So do I recommend it?  You bet I do, but not as completely as some of the other courses, certainly it's not even close to Music as a Mirror of History or Bach and the High Baroque.  But if you're interested in this particular musical form, it's an excellent overview.

Greenberg is a great performer

Greenberg is a fun loving dramatic actor with great deliveries, a great sense of humor and appears to love his work - rock on Shakespeare.

Greenberg is the best!

I’ve listened to many of his courses and they are all terrific. He’s knowledgeable, organized, insightful and very funny. And he plays wonderful music. I learn a lot and have a great time doing it.

Somehow I’ve overlooked the concerto of favor of symphonies, operas and chamber music. But no more. This course made me appreciate what a rich format the concerto represents. As always, thank you Professor Greenberg!

Robert Greenberg is so exuberant and engaging, you can't call it a lecture series - though it is organized, well-structured, and full of great learning. It's a musical journey and he's a hilarious guide

Concise and Entertaining Overview of the Concerto

Professor Greenberg is always informative and through in his courses and always entertaining. He highlights notes just form and content but Connie ts a musical compasition to a particular point in the composer's life and historical setting. Great stuff great course.