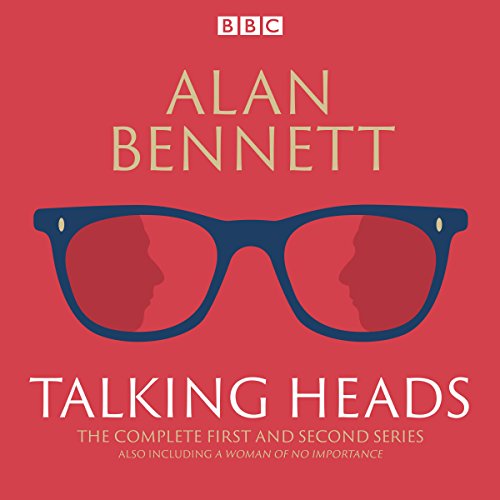 The complete audio collection of Alan Bennett's celebrated monologues, published together for the first time and performed by some of Britain's best actors.

The Talking Heads monologues are widely regarded as one of Alan Bennett's finest dramatic achievements. First broadcast on BBC TV and BBC Radio 4 in the 1980s and 1990s, they won a host of awards and huge popular acclaim and remain among his most admired works today.

This collection includes all twelve Talking Heads, plus the precursor of that series, 'A Woman of No Importance'.

Beautifully crafted and full of compassion and wry observation, each tale is ripe with the quirky, insightful detail that has become Bennett's trademark. The monologues are: 'A Woman of No Importance' (Patricia Routledge); 'A Chip in the Sugar' (Alan Bennett); 'A Lady of Letters' (Patricia Routledge); 'Bed Among the Lentils' (Anna Massey); 'Soldiering On' (Stephanie Cole); 'Her Big Chance' (Julie Walters); 'A Cream Cracker Under the Settee' (ThoraHird); 'Miss Fozzard Finds Her Feet' (Patricia Routledge); 'The Hand of God' (Eileen Atkins); 'Playing Sandwiches' (David Haig); 'The Outside Dog' (Julie Walters); 'Nights in the Gardens of Spain' (Penelope Wilton) and 'Waiting for the Telegram' (Thora Hird).

Alan Bennett's "Talking Heads" series deserves every ounce of praise possible. In each story we become acquainted with a heroine (on rare occasion, hero) in the midst of a personal struggle of one sort or another, and over the course of the monologue we learn through what is - and isn't - said just as much about the mental state of the storyteller as the events transpiring themselves. Each character, of course, sees things her (or his) own way, but unexpected revelations abound, and whether, by the end, the storyteller has understood the full impact of what's been happening is largely up to the audience to determine. "Talking Heads" was originally written for television, and was a unique proposition at the time, and later produced for radio (what we hear here), followed in book form, and each format excellently conveys Bennett's unique skills at observing, writing, and carrying his audience along throughout the course of the plot. These stories are meant to be enjoyed time and again, and something new is undoubtedly to be gleaned with each new visit.

The performances on these plays are top notch, every one.
The stories themselves are depressing and sad. The characters are wonderfully fleshed out and real but maybe a little too real.
I'll only listen to the rest if I need a good cry.

Fantastic writing read so well, so much of the story is in what is not said but it's easy to read between the lines. Don't listen when you are feeling down though as it may finish you off!

Wonderful moving stories. Brilliant Alan Bennett. Will listen to it again and Oder copies for my friends

A great collection of funny , insightful and touching stories. As only Alan Bennett can do !

Never ,ever ,get tired of listening to these wonderful monologues . I know them from the eighties and they never fail to delight . A real treat to listen to .

What made the experience of listening to The Complete Talking Heads the most enjoyable?

I loved the different readers and the stories were very engaging. I was inspired to listen to these monologues after seeing the Alan Bennett film ' lady in the van'

Margaret in the 'Woman of no importance '

Have you listened to any of Alan Bennett and Patricia Routledge ’s other performances? How does this one compare?

I enjoyed others but this was my favourite

The original and the best with flawless performances by all involved. The stories are so good, you revisit them again and again.

wonderfully written, tragic and poignant at the same time, yet laugh out loud funny in places. always with the twist at the end. i loved all the stories.

Where does The Complete Talking Heads rank among all the audiobooks you’ve listened to so far?

A solid listen, but I found it emotional. For younger listeners, patience is required.

The story is of good quality, but what sold this audio book is it's performance.

At his very best.
This book is down to earth and real.
When listening, I'm with him/her in the living room, at the park, in the shop. I'm there.
A truly, wonderfully written book.
I have listened over and over again and shall continue to read every single story.
But then... I expected no less from this great and wonderful gent

Alan Bennett is a writer whose talents are diverse in form but not in content. Some of these monologues explore ideas and characters quite similar to those in other ones (and in his other works) but always with such empathy and artistry that I never really mind. Read by some of the best British actors, each performance is word-perfect. Highlights are Anna Massey in Bed Among Lentils, Thora Hird in Waiting for the Telegram, and Bennett himself in A Chip in the Sugar.