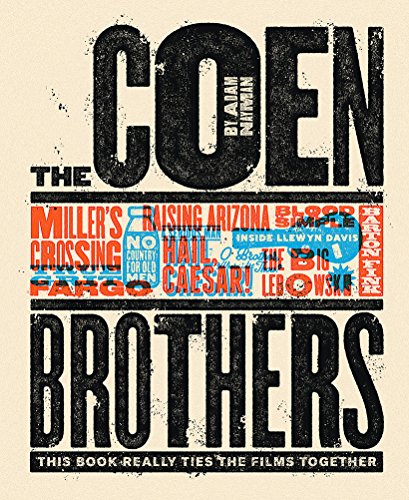 A playfully critical journey through the Coen brothers' filmography

From such cult hits as Raising Arizona (1987) and The Big Lebowski (1998) to major critical darlings Fargo (1996), No Country for Old Men (2007), and Inside Llewyn Davis (2013), Ethan and Joel Coen have cultivated a bleakly comical, instantly recognizable voice in modern American cinema.

In The Coen Brothers: This Book Really Ties the Films Together, film critic Adam Nayman carefully sifts through their complex cinematic universe in an effort to plot, as he puts it, "some Grand Unified Theory of Coen-ness." The book combines critical text - biography, close film analysis, and enlightening interviews with key Coen collaborators - with a visual aesthetic that honors the Coens' singular mix of darkness and levity. Featuring hard insight, this book will be the definitive exploration of the Coen brothers' oeuvre.

For fans like myself, I think most of the information and analysis of the Coen Brothers' films is fairly well understood, but some of the insights could be useful for a newcomer. There are a few tidbits of myths and myth-busting, but the bulk of the book consists of the synopses, themes and threads running through their films. While that may at first seem tedious or academic, let me state categorically, it's not. After every segment, I desperately wanted to go back and watch each film again. Every.Single.Time. (Yes, even including Ladykillers and Intolerable Cruelty!). And I learned to enjoy the gimmick of listing the percentage of constituent parts of the films upon their introduction. It's well worth the time for fans of the Coen Brothers. And for those people who claim that they *don't get* the Coens' films, even after multiple viewings, it may help guide them into a new appreciation.

Excellent if you're looking for a synopsis and critique of the Coen brothers films, but unfortunately I was hoping that this would be as much anecdote as analysis. I think the stories behind the making of the films would have been of more interest to me than an in-depth review of the films.

Simply put - if you enjoy the movies, you will enjoy this book. The author definitely goes deep and takes the reader on a big picture thematic journey through the Coen brothers films as well as a vastly entertaining meta journey.

For those of us mere mortals that can only see 1 or 2 levels deep in the Coen brothers films but, nonetheless enjoy them immensely, the insights in this book allow us to enjoys the films, and the careers, on many new levels.

Inside Joel and Ethan

A fantastic depiction inside the minds of two of the best America filmmakers ever! And yes, this book really does tie all the movies together!