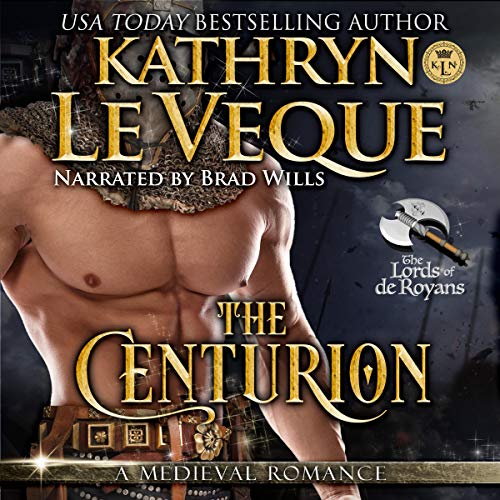 A mighty knight known as "The Centurion" is the man in control behind a powerful liege with dementia, but when his love for a young woman begins to compromise the stability of the Scottish marches, he must make a choice between love or peace.

Sir Torston de Royans is known on the border as a man of reason, wisdom, and great strength. He also happens to serve a greatly respected liege who slips further into dementia with each passing day. Lord Lionel Harringham believes himself to be a Roman Caesar, and Torston is his great centurion. Unfortunately, Lord Lionel also commands one of the largest castles in the north, and Torston finds himself in a position of not only the protector of the castle known as The Lyceum, but the protector of Lord Lionel’s reputation.

Adding to this stressful situation is Lady Alyx de Ameland. A young woman from an allied family, she has loved Torston for as long as she can recall, but he’s never shown much interest in her. At least not publicly. But privately, Torston longs for Alyx a great deal. However, he cannot think of marriage because of Lord Lionel’s madness. It wouldn’t be fair to bring a wife into the mix of madness that plagues The Lyceum.

But Torston isn’t the only one who longs for the lovely Alyx. A Scottish laird has his eye on her, too.

Laird Douglas Kerr is a man who covets the English lass and does everything in his power to convince Alyx’s father that he would make a good husband for her, but his motives are not honorable. He covets Alyx’s land more than Alyx herself.

As Torston realizes that he can no longer wait to declare his intentions for Alyx, something he has been keeping secret for years finally makes itself, or herself, known: his betrothed. And she brings hell with her.

It’s medieval mayhem, madness, and matrimony on the borders as Torston and Alyx fight for a love that, once realized, is more powerful than all the armies in England and Scotland.

Will true love prevail in spite of the odds?

This story is filled with romance, intrigue, suspense and historical content. Kathryn Le Veque takes you into Medieval times with flair and accuracy while weaving a story difficult to put down until the end! Torston and Alyx will win your heart as will many of the other characters in this audiobook. Brad Wills is definitely becoming one of my favorite narrators. He always brings the story to life with his amazing variety of voices and makes the listening experience pure entertainment. I enjoyed this book tremendously and highly recommend it. You won’t regret picking this one up!

Not much of a romance

SPOILERS**********Torsten was betrothed. He had all the women in love with him - and at least one of the men. The h pined for him for years. The H finally decided he wanted the h, and took her. Then, he had to get rid of his betrothed. Fortunately, the betrothal was not an honest one, so at least we didn’t have to feel sorry for an innocent woman. I was actually rooting for Douglas, the Scot who kidnapped the h, and treated her very well while the H had to go off and rescue the son the H had with a maid and then abandoned.

The narrator - Brad Wills - is fantastic!

Well readers, here we have a book full of deception, mystery, history and of course a great love. One so great that either was willing to die, be separated from all contact or knowledge of friends or family, just to be together! But let's face it, The Queen of love, history and intrigue will do a better job of keeping you on your toes than that! I have read most of Kathryn le Veque's published books and all have been excellent at keeping my attention through the day and/or the night. The CENTURION is one of her best (in my opinion)! Every page provides a mystery, new intrigue, deception, clue, or sign of a great love coming to fruition! Even so, the story moves quickly! No time for boredom! Just time to guess what could possibly happen next! EXCELLENT READ or LISTEN ON AUDIBLE! Brad Wills as the Narrator never disappoints and keeps our attention sharp with his ability to do voices and dialects! This review was done after listening to the audiobook twice. It is a keeper and I will revisit Lycia again in the future!

I’ve listen to so many Kathryn Le Veque books and only 2 have jerked tears from my eyes. This was one of them. Brad Wills isn’t just a narrator, he’s a Class A performer! Holy Cow! I am not an emotional person and never really cry for books or movies and his performance mixed with her writing have literally moved me to tears.

I loved this book if you can’t tell lol. I only wish I would have gotten closure on one little detail and that’s just the vindictive part of me that wants to hear in graphic detail the down fall of the bad guy. But it wasn’t even addressed at all. Gosh I really really really hated the villains in this story so would have loved to hear about their demise.

Oh well other than that tiny detail this book was pure literary perfection! I got it with the romance package but will now buy it because it’s just that good :)

I loved this book. The story of Torston and Alyx is so good. There wasn't much emotional heat in this book the way I like it, but to be honest, I didn't miss it. The story was so good all by itself. Brad Wills is always great and he makes the already good story, live. I have never been disappointed with KLV's books.

This novel was so compelling. A knight brave and true and his lady face troubles and trials but overcome obstacles such as a devious woman and a cantankerous Scot to be together. But what is truly wonderful is the narrator brings the adventure to life. Great accent plus the right emotions are expressed to make a great book Awesome.

As usual, a very good read

I enjoyed this book with the exception there was not enough romance and physical contact in the book.

I've read most of Kathryn Leveque's books and this is in the top 5! if you've ever read any of her other books you won't be disappointed! if you haven't and like this genre you will love this book!

I absolutely loved reading the book when it first appeared on my kindle, but hearing Brad Wills narrate this fabulous book was just the icing on the cake! I always tend to lose myself in the stories Brad narrates for us. Everyone comes to life. Even if you have read the book, you will still need your box of tissues at the end. 5+ Stars to both Kathryn Le Veque and Brad Wills for this amazing collaboration! 💗

This is a wonderful story! Action, emotions, fun characters, with a great performance by Brad Wills. I laughed and cried both. Loved it!