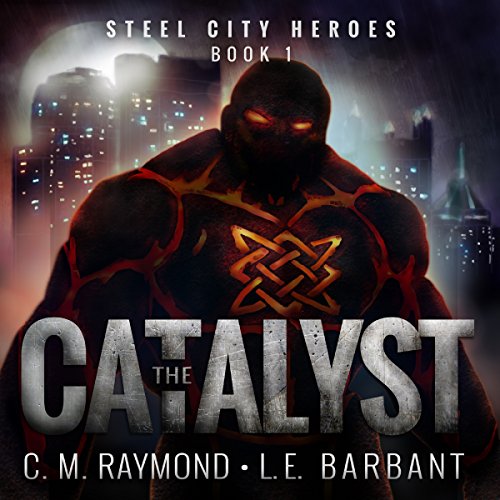 When Sean Moretti's powers manifested themselves, a lifetime of comic books taught him what to do. Already struggling to make it as a normal college student, his new-found ability to sense energy in those around him did nothing to simplify his life. As destructive forces descend upon Steel City, he must learn to channel his potential, or die trying.

Willa Weil has a secret - she comes from a long line of magicians trained to unlock the power hidden within poetry. This skill requires discipline and the Guild demands obedience. Willa has long kept her power to herself, but when a molten metal creature threatens to consume her friends, she can no longer remain on the sidelines.

History professor Elijah Branton moved to Pittsburgh for the job of a lifetime, researching the family history of one of the nation's wealthiest and most attractive CEOs. But not everything is as it seems in the Steel City. The historian soon unearths a deadly conspiracy that threatens to unravel his world.

Can they save their city, or will they lose themselves in the process?

The Catalyst is Daredevil meets The Dresden Files, a gritty and gripping superhero/urban fantasy story for the 21st century. With magic and monsters, science, and secrets, The Catalyst pushes listeners to consider their own path and the ethical compromises we all make - heroes and villains alike.

Editor's note: While not gratuitous, The Catalyst contains some strong language.

What did you love best about The Catalyst?

The characters and the questions asked about life in the steel city. The story was great as well. The doctor character in a different world would be an awesome villain.

20% more action throughout the story would make the story amazing.

The scene where the historian hooks up with his boss only after a couple of bottles. A close second for when the chem doctor treats the drug dealers.

I had one extreme reaction to this book. The moment made me laugh out loud. It was when the chem. scientist was in the ghetto and treating the drug dealer. I just laughed because I could relate to that whole experience.

Don't be on the fence, just dive in and enjoy the story. As I described it a loved one, A great origin story with some action sprinkled in. And Ian McEuen did a great job throughout the book.

Would you listen to The Catalyst again? Why?

This was great story telling. It was witty, engaging, and left me wondering what will happen next. The narration was amazing. Ian McEuen creation of personalities was stunning. This is a story I wouldn't mind listening to over and over. I can't wait for the next book!

Would you listen to The Catalyst again? Why?

Yes, because the story was engaging. The characters were bought to life through their development in the story. And the story line was entertaining and exciting. It was a different take on some not so different comic book ideas.

Willa, her strength of character developed as the story went on. I was never quite sure who the main hero would be, and I am not saying that she is but...I liked what she does and how she does it. No spoilers here...

What does Ian McEuen bring to the story that you wouldn’t experience if you just read the book?

The ability to listen to the book, LOL. He does a solid read, and the only distraction is that the poor guy cannot do female voices when they become excited or emotional. Sounded just like me if I tried to do. Made me smile and grimace when he tried to do so. But didn't take away from the overall performance. I enjoyed his reading.

X-men, Wizards and Warlocks, Science, NO, The Catalyst!

Very enjoyable audible book. Is standalone in that you can listen to this one book and have closure to the story. But it left me wanting more so I will be purchasing the next one in the series to see how it develops.

The Catalyst
(Steel City Heroes #1)
by C.M. Raymond
This had magic, science, and monsters. It started ok but got boring in the middle. The end picked up again.

Loved the narrator's smooth cadence, a similar rhythm to the Wool omnibus. A little slow for my impatient ears, but still read really nicely after bumping up the speed (which I do for everything, so that's not a reflection on the narration). Good, solid story with memorable characters and excellent prose (also, in a way, like Wool) - those beautiful lines that just sing in the heart, which may sound an odd pairing with a superhero story, but surprisingly worked well for me.