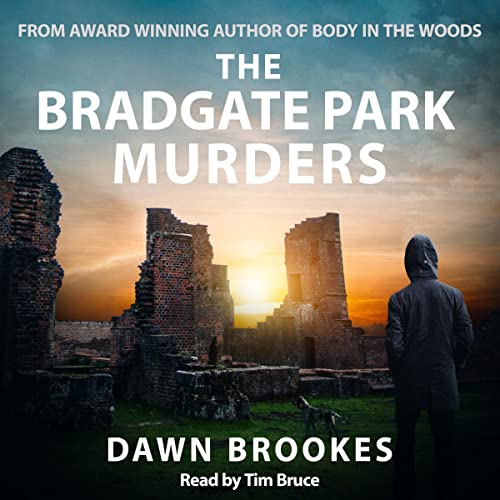 Three dead bodies. A mountain of lies. Will the hunt for a killer turn fatal?

Private Investigator Carlos Jacobi wants to spend time in London with his girlfriend, and his favorite pooch. But, after recovering stolen puppies to smash a dog-theft ring, he’s still upset that the mastermind escaped, when he gets a call about strange fatalities in Leicester. And with the victims’ wives asking for help, he allows himself to be roped into investigating a possible triple murder.

Buried in half-clues and conflicting evidence, Carlos struggles to provide a link to reveal the obscure motive behind the deaths. And as he tracks the elusive perpetrator, the haunted investigator finds himself on the wrong end of a brutal beating, meant to throw him off the trail.

Can the clever sleuth untangle a web of corruption, before he’s ensnared in a deadly trap?

What a great listen!

Carlos Jacobi and his canine pal Lady are on the trail of a sinister nemesis when their paths cross again with his police detective friend Fiona!
This story has lots of twisting plot turns that keep the reader glued to the pages ( or in my case the headphones! ) written as a sequel, it's great as a standalone. The narrator is top-notch and adds to the positive experience. While written as a spin-off from the Rachel Prince Series, this is definitely a strong series all on its own and I'm genuinely looking forward to the next book.

This time 3 old school chums met their maker under suspicious circumstances. Their widows team up and hire Carlos to look in their murders because as we all know the police don't always get it right on the first go round. An old murder of young Ben gets connected to the 3 old school chums, and a young man gets framed by the real mastermind behind their murders.

Carlos and Fiona worked together smoothly and also separately to figure out who that mastermind was. I really enjoyed the pairing of P.I. sleuthing Carlos and police detective Sargent Fiona. And, a special shout out goes to Lady, the four-legged P.I.
companion of Carlos.

Carlos Jacobi is a very likeable character and also Lady his faithful companion (springer spaniel) he is a private detective and does have a very good friend Fiona in the police force, they get on well and very often get to work together. He has just finished one of his cases a dog napping ring but did fail to get the top man but Carlos is not the type of person to let go easily.
This time he has been hired by 3 women whose husbands have been murdered. Trying to solve this is a bit hit and miss for our detective and with Fiona and Lady, he does get a bit of help even if Fiona & Carlos use each other as sounding boards.
This is the 2nd Carlos book well written and the narration by Tim Bruce is always a pleasure to listen to, such a comforting voice.
I'm sure there will be a 3rd book in this series.

I listened to this audio whilst I carried on with my day job and I really enjoyed it!
The setting is relatively familiar to me and the initial investigation of Carlos piqued my interest straight away.
I like his friendship with Fiona and was good to see her taking the lead as SIO.
Looking forward to hearing the next one very much.

This series gets better and better

Not only does it feature wonderful characters who I am in love with it also always gives a nod to my favourite crime solver on the sea as well which always makes me smile. I love this series and I’m sitting on the edge of my seat now waiting for the next one!

I feel I know Carlos Jacobi very well, having been introduced to him by his lovely girlfriend, Rachel Prince, star of Ms Brookes' Cruise ship series and now bumping into him again with book 2. He's such a likable character and it's an example of how well written these books are is the fact I feel as if I know him well. There is just inference to darkness and trauma within him, which stops him being too perfect. Is it bad that I love his assistant Lady as much? And police officer Fiona is just the icing on top of a delicious cake - totally credible and adorable. Highly recommended and I can't wait for book 3

I was born in Leicester, and lived there for the first 45 years of my life, and I actually know most of the places described in this book. it was a great piece of work, a very enjoyable listen. Brilliantly narrated.

Carlos and Lady are back!

This second book in the Carlos Jacobi series starts with him investigating a case of dognapping. Then he is hired to look into the murders of 3 men in a lonely tourist spot. He once again teams up with police sergeant, Fiona, and is helped by his fabulous dog, Lady, a springer spaniel.

The book is fast paced with plenty of twists and kept me guessing to the end. Carlos is a great character, and after first meeting him in the authors Cruise series, he now feels like an old friend.

Tim Bruce's narration is perfect for the book. Now looking forward to the publication of Book 3.

I was looking forward to the second book thinking that the narrator wouldn't annoy me as much as the first time. Alas, I think I need to read rather than listen if I do any more in this series. In particular Jacobi's voice - it does not sound authentic in the slightest!

Regarding the storyline, this was good - characters starting to feel like you know them. The style is nice, pleasant, and the secondary storyline is about friends and how their relationships develop, paving the way for book 3 of course. The plot was well thought out and it was an easy listen - except for my initial gripe re narrator!

A great follow up to the first Carlos Jacobi book which kept me engaged, with good pace and great narration. This time he's in Leicester where three men are found dead in mysterious circumstances and he is asked to investigate. Linking up with his Police friend Fiona the interweaving stories start to come together to reveal the truth. Lady the dog is amazing as always. This is a great series and I'm really looking forward to more.

A second outing for Carlos Jacobi, the P.I. who we first encounter in the “cruise” series by the same author. He is joined again in this book by his friend and ally Fiona, a detective sergeant in the police. Again, Carlos is ably assisted by his faithful and talented springer spaniel, Lady.
I was hooked in from the start of this book as the dog napping ring story was something different and exciting. As I know Bradgate Park very well, I could picture the landmarks in my mind as I was listening to the story unfold.
The narration was clear and pleasant to listen to. A thoroughly enjoyable read and I look forward to book 3.

A great 2nd part to series

I loved being reunited with Carlos and especially Lady.
Being a huge dog fan, made me extra passionate to the part about the dog napping.
The story had my interest right from the start and kept me entertained throughout.
A successful part 2 to this series.
The narrator suits the story.