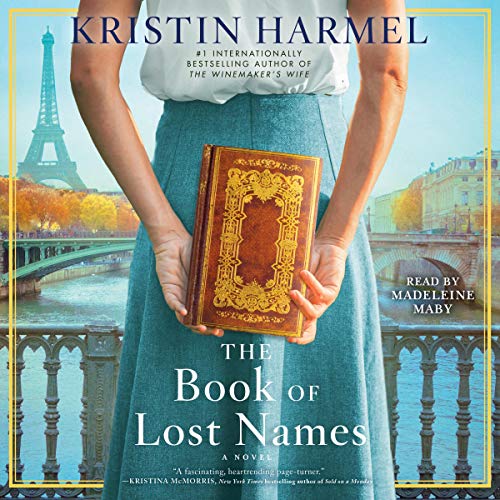 “A fascinating, heartrending page-turner that, like the real-life forgers who inspired the novel, should never be forgotten.” (Kristina McMorris, New York Times best-selling author of Sold on a Monday)

Eva Traube Abrams, a semi-retired librarian in Florida, is shelving books when her eyes lock on a photograph in the New York Times. She freezes; it’s an image of a book she hasn’t seen in more than 60 years - a book she recognizes as The Book of Lost Names.

The accompanying article discusses the looting of libraries by the Nazis across Europe during World War II - an experience Eva remembers well - and the search to reunite people with the texts taken from them so long ago. The book in the photograph, an 18th-century religious text thought to have been taken from France in the waning days of the war, is one of the most fascinating cases. Now housed in Berlin’s Zentral- und Landesbibliothek library, it appears to contain some sort of code, but researchers don’t know where it came from - or what the code means. Only Eva holds the answer, but does she have the strength to revisit old memories?

As a graduate student in 1942, Eva was forced to flee Paris and find refuge in a small mountain town in the Free Zone, where she began forging identity documents for Jewish children fleeing to neutral Switzerland. But erasing people comes with a price, and along with a mysterious, handsome forger named Rémy, Eva decides she must find a way to preserve the real names of the children who are too young to remember who they really are. The records they keep in The Book of Lost Names will become even more vital when the resistance cell they work for is betrayed and Rémy disappears.

An engaging and evocative novel reminiscent of The Lost Girls of Paris and The Alice Network, The Book of Lost Names is a testament to the resilience of the human spirit and the power of bravery and love in the face of evil.

The Book of Lost Namesに寄せられたリスナーの声

The premise of the story was interesting and good history-telling, but the fictional characters used to tell it were abysmal. I found Ava really annoying and immature. Her devotion and complete submission to a selfish, bigoted, self-righteous, and profoundly idiotic mother was unbelievable to the extreme. I kept waiting for her to develop a spine. And there were so many holes in the plot that it left me laughing at times. Just when Ava needs to find out what happened to her mother, and she dresses up like a bag lady with a limp, no one stops her and asks to see her papers, even though the Naziis were desperate to get their hands on her. Really??? And the relationship between Ava and Remy was puzzling and unfullfilling to me. The book over all was worth the read, but was basically a good idea only half-executed.

I was really annoyed by main character. She was not very bright, and wanted to slap her multiple times.

I really enjoyed this audible book. Seems to have captured life I. Occupied France. Or Vichy France It appeared to be one and the same. Nothing free about this area of france. Her characters were so real life. Mother daughter dynamics were so true. Even in 2020 as in 1943 occupied France. The bravery of the gentiles to help save lives of Jews was astounding. To their own peril many times I would love to see a movie made of this book. The art of forgery was interesting and so many lived because of this . I laughed and cried the last ten minutes you will too

The story itself was good.

Not a fan of the writing or the narration but the story was interesting.

I was not as impressed by this book as others seem to have been. I felt the prose was a bit repetitive (lots of blushing girls), and the storyline was predictable. The background story was intriguing, which was why I downloaded it, but in actuality, the story itself was just “ok” unfortunately. I also thought the narrator should have been coached more on the pronunciation of the French and German words—many were very “off.” I did not love her choice of voices for the characters much either.

I really enjoyed hearing about the French Resistance and the individuals who helped the Jewish children escape to Switzerland. As forgers Ava and Remmy had a strong tie which lead to a deep love never to be forgotten. The characters were well developed and the story moved along. I would recommend this book to anyone who enjoys knowing more about the side stories of World War II.

Such great subject matter and then

I loved the plot. I learned about brave men and women. And how thousands of children were smuggled to safety during WWII. But the backdrop couldn’t save this maudlin,repetitive essentially harlequin novel. I felt most of the time I was watching a repeat of Perils of Pauline. A shame. Such potential.
 

This is in the genre of The Nightingale, The German Midwife and We Were the Lucky Ones - all of whom were thoroughly researched, credible and based on real events. While the story is entertaining, you definitely have to suspend your disbelief at all the things the author got wrong. As someone who is fascinated by this time period, this got increasingly more frustrating as the book went on. The writing is wooden and simplistic, and the narration is quite monotone. I cannot recommend.

Narration did not add to the story

While I appreciated the attempt to create a wide variety of accents, languages and characters, the reading felt forced and choppy. While one dimensional, the story was worth the read.