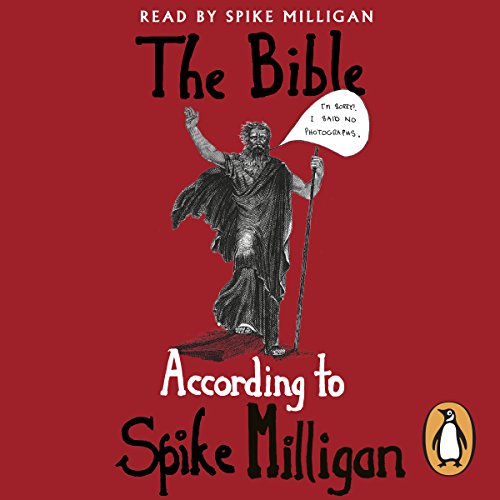 The Bible According to Spike Milligan

'And God said, Let there be light; and there was light, but Eastern Electricity Board said He would have to wait until Thursday to be connected.'

There have been many interpretations of the Old Testament over the centuries but never one quite like this.

Spike Milligan has rewritten, in his own inimitable style, many of the best-known stories of the Old Testament, featuring characters like King 'my brain hurts' Solomon; the great oaf of a giant, Goliath; and the lesser-known crossword clue, Hushai the Archite.

Believers and nonbelievers alike will enjoy this hilarious reworking, where the jokes, jests and jibes tumble over each other from chapter one, verse one until kingdom come.

The Bible According to Spike Milliganに寄せられたリスナーの声

wonderfully daft with Spike's unique style. I spent the time giggling like an idiot. Spike as the narrator added an extra dimension to it.

Interesting reading of the Bible, with plenty of dark humour. It’s almost like Spike is ‘reading’ this over a pint and conversation.
Great for car journeys (without kids), with a few laugh out comments. Pity he didn’t to other religious books…..

Gave up half way through, I couldn't listen any longer. More excruciating than funny. Enough said!

I am a great fan ofSpike Milligan, but this must be one of the worst books I had ever read. Oh well back to the goons!

brings back many happy nights with rith the box tk

Absolutely love this book been after it for quite some time..Spike Milligan at his best 5 stars ..funny from start to finish just wish pdf available

Brilliantly funny retelling of the bible by the legendary spike milligan. Worth a read loved it