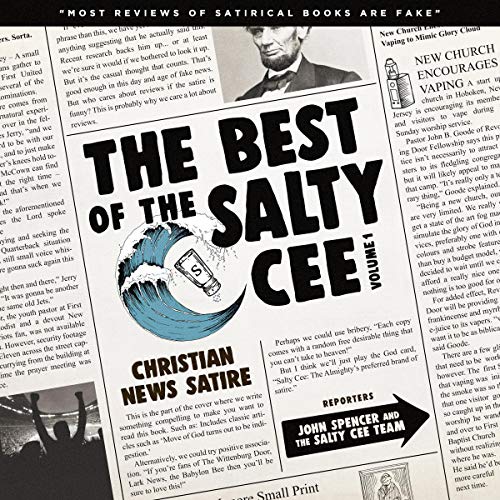 More salty than the Dead Sea

The Salty Cee is an online Christian news satire website that doesn’t take itself too seriously. This volume contains more than 40 of their best-loved articles that poke fun at Christian culture and celebrities, including:

By the law of averages, you’re sure to find something that eventually makes you laugh.

The Salty Cee; where even the worst satire floats.

The Salty Cee was started by John Spencer together with a bunch of other Christian Anon Twitter users who got bored of The Babylon Bee ignoring our submissions and thought, “why should they have all the fun”

However, we soon discovered that calling ourselves The Babylon Cee got their attention, well their lawyer’s attention to be precise, in a rather unwanted way. This was probably the most excitement in Christendom over one letter since the First Council of Nicaea in 325.

A quick name change and we were back, saltier than ever and trying to bring a little cheer to our corner of the interweb thingy.

The Best of the Salty Cee, Vol. 1: Christian News Satireに寄せられたリスナーの声