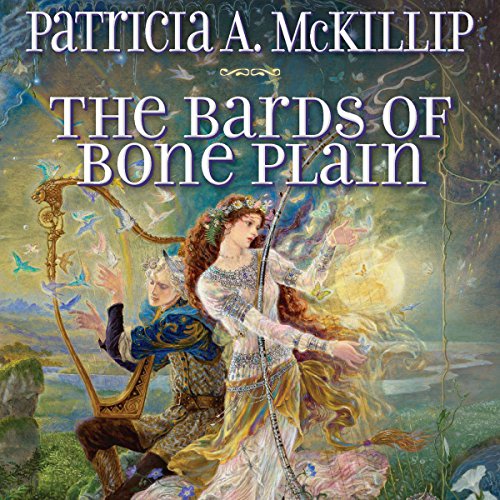 The Bards of Bone Plain

"The Bards of Bone Plain is another McKillip novel that leaves the reader in awe. It’s a gorgeous story that celebrates the power of music, language, and love." (FantasyLiterature.com)

The newest novel from the World Fantasy Award-winning author of The Bell at Sealey Head. With "her exquisite grasp of the fantasist's craft" (Publishers Weekly), Patricia A. McKillip now invites readers to discover a place that may only exist in the mystical wisdom of poetry and music.

Scholar Phelan Cle is researching Bone Plain - which has been studied for the last 500 years, though no one has been able to locate it as a real place. Archaeologist Jonah Cle, Phelan's father, is also hunting through time, piecing history together from forgotten trinkets. His most eager disciple is Princess Beatrice, the king's youngest daughter. When they unearth a disk marked with ancient runes, Beatrice pursues the secrets of a lost language that she suddenly notices all around her, hidden in plain sight.

Veteran fantasy novelist Patricia A. McKillip crafts another rich, complex world in The Bards of Bone Plain, and narrators Marc Vietor and Charlotte Parry do a wonderful job of bringing it to life. Vietor and Parry make everything in Bone Plain, including the arcane and/or completely made-up words and character names, sound natural and inviting, like a tune you can easily pick up just by listening to a few bars. It helps that McKillip is focused on character over elaborate mythology, painting vivid pictures of the people of Caerau, an ancient city that’s home to the pre-eminent school for bards. There Phelan Cle is completing his studies by putting together the bardic version of a dissertation, and McKillip has a little fun with the notion of graduate school drudgery in a fantasy world.

Phelan’s subject is the ancient bard Nairn, and the novel switches between the present and the past, chronicling Nairn’s long-ago adventures mostly as Phelan discovers more about them. McKillip crafts a range of memorable characters, including Phelan’s cranky but mysterious father Jonah; the kingdom’s tomboy-ish princess, Beatrice; and Declan, Nairn’s mentor and keeper of mystical bardic secrets that hold far more power than merely producing sweet music. Unlike many fantasy novels, Bone Plain doesn’t have the manufactured urgency of a quest or a war to propel it along; instead it plays out more like a fable, with the characters coming to significant but low-key revelations as the story progresses.

Vietor reads the bulk of the book with a friendly but authoritative tone, easily differentiating between characters without resorting to silly fantasy-world voices. Whenever McKillip switches to a short excerpt from Phelan’s research (mostly to open chapters about Nairn), Parry takes over in her mellifluous British accent, offering a nice change of pace and a simple way to delineate one style from another. The simple, elegant approach to narration matches McKillip’s writing style, making for a story that’s as lovely to listen to as it is to experience. —Josh Bell

The Bards of Bone Plainに寄せられたリスナーの声

I loved the story. McKillip's remarkable characterizations and her elegant use of language work very well to evoke a world. Her deft handling of archetypal characters and fantasy literature tropes neatly avoided predictability, while managing to resonate on many different levels (as the best fantasy should).

I liked the idea of two narrators, but I wanted to hear more from Charlotte Parry -- and maybe less from Marc Vietor. They both turned in satisfactory performances, but for a gem of a book, like this one, I was hoping for something well beyond adequate.

All in all, The Bards of Bone Plain is a good read/listen which I recommend to any fantasy lover.

The Bards of Bone Plain

Very good. I've read multiple of the authors books, and I would rate this as slightly worse than the Riddle-Master Trilogy and slightly better than Ombria in Shadow, which I had previously considered to be her two best stories. Excellent narrator. Is set in a Victorian setting, has themes of archaeology, music, magic letters, and harping. Also has steam powered cars. I'd recommend this to a friend.

The power of music, language, and love

Patricia McKillip is a must-read author for any true lover of fantasy literature. With a voice all her own, she imbues her work ??? both the story and the style ??? with beauty, magic, and wonder. Her latest novel, The Bards of Bone Plain, is just as enchanting as I was expecting it to be.

The Bards of Bone Plain combines the arts and sciences (and mysteries) of archeology, music, language, and history, to create a multi-layered story that???s sure to satisfy both sides of your brain. I enjoyed the academic atmosphere and the way that Phelan???s research paper was used as alternating chapters to present Nairn???s story. In the audiobook edition, only these chapters are read by Charlotte Parry so that they are clearly set apart.

The characters are well-done, though there are so many important ones that we don???t get to know them all as well as we???d like to. I especially liked Princess Beatrice, who drives a steam-powered car and is always trying to balance her courtly duties with her dirty hobbies. She hates the social events she???s required to attend, but she knows that if she pushes her mother too far, she???ll be shipped off to the country to live with her sister???s family. Beatrice???s social blunders and her interactions with her family are delightfully humorous.

If you???re familiar with Patricia McKillip, then you know she writes in a somewhat dreamy and fanciful style that, though lyrical and lovely, is occasionally misty and vague. While the plot of The Bards of Bone Plain is fairly straight-forward, McKillip???s romantic style shrouds some aspects of the plot and characters in mysteries that are never completely cleared up. This sense of wonder is part of what makes her stories work so well as fantasy. The Bards of Bone Plain is another McKillip novel that leaves the reader in awe. It???s a gorgeous story that celebrates the power of music, language, and love.

This is a difficult audio book to get into. I am forcing my way through it, but I am about to give up. I wonder if I can get my credit restored. I usually love her work - the Riddle Master of Hed is one of my all time favorite books.

This is the third audio book I've listened to and I'm amazed at how good the people narrating the novel was. The story meanwhile is as good as any as Mckillip had written. I've always have an affinity to bards and their ilk, so I was quite eager to get my hand on this title. Although, I'm not used to the pace the audio book sets, I can read a paper book in half the time in took for the audio to finish, with a few more titles on my belt, I'm sure that any hesitation I might have on audio books will vanish entirely, especially if the quality of narrators remains excellent.

As the Talking Heads sing, "Say someting once, why say it again?" (or something like that). Although this book is about music and poetry, the writing beats both right out of you. Maybe that's because the ancient story and the new story are exactly the same and because each chapter dealing with the ancient story is prefaced (using a different narrator) by a synopsis of exactly what you're about to hear. I couldn't wait for it to end and when it did, it was so predictable I was annoyed I had devoted so much time to it.

Takes multiple listening to figure out minimally what is going on. Time jumps, steam cars and magic runes, wrapped in mystical powers of words and tunes - like someone's nightmare before their first recital. I still don't know where Bone Plain is; nor how one can be cursed with unending life by playing badly.

I really loved this book. This is one of my favorite authors. I wish all of her books were available as audiobooks.

Enjoyable. However, it can retread previous novels of hers. I would suggest that a friend reads this.