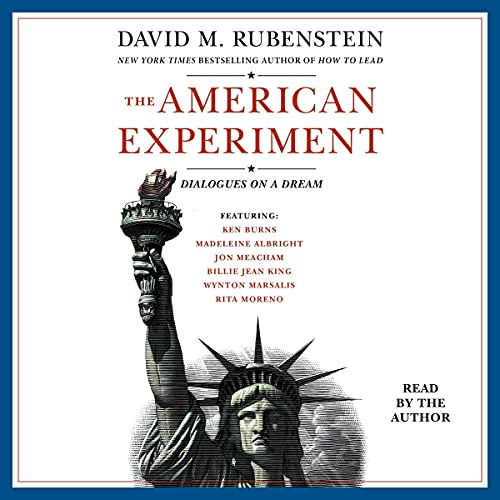 The capstone book in a trilogy from the New York Times best-selling author of How to Lead and The American Story and host of Bloomberg TV’s The David Rubenstein Show — American icons and historians on the ever-evolving American experiment, featuring Ken Burns, Madeleine Albright, Wynton Marsalis, Billie Jean King, Henry Louis Gates Jr., and many more.

In this lively collection of conversations — the third in a series from David Rubenstein — some of our nations’ greatest minds explore the inspiring story of America as a grand experiment in democracy, culture, innovation, and ideas.

Exploring the diverse make-up of our country’s DNA through interviews with Pulitzer Prize-winning historians, diplomats, music legends, and sports giants, The American Experiment captures the dynamic arc of a young country reinventing itself in real-time. Through these enlightening conversations, the American spirit comes alive, revealing the setbacks, suffering, invention, ingenuity, and social movements that continue to shape our vision of what America is — and what it can be.

As a physician , I acknowledge my ignorance in most of the interviews just experienced . We go through undergraduate education concentrating on basic sciences & medical & postgraduate education without knowing about so much of the world. David Rubinstein through his 3 books has given me an education into this world which I’m eternally grateful

Authors Anti Trump Bias Too Much

Is was hard to listen any longer once the author got to his views on Trump both Covid and the 2020 election.
Had to turn it off.

uneven but worthwhile. The American Story much stronger. but as a series of interviews, needs to be listened, not read on the page.

such interesting interviews. learned something unexpected from each one. made my daily walk fly by.

great listen to so many wonderful perspectives. great american stories. so much that we can accomplish

Although I do not like Rubenstein's style of interviewing his subjects, the topics, and the interviewees made the entire listen more than worthwhile. Wynton Marsalis was mesmerizing