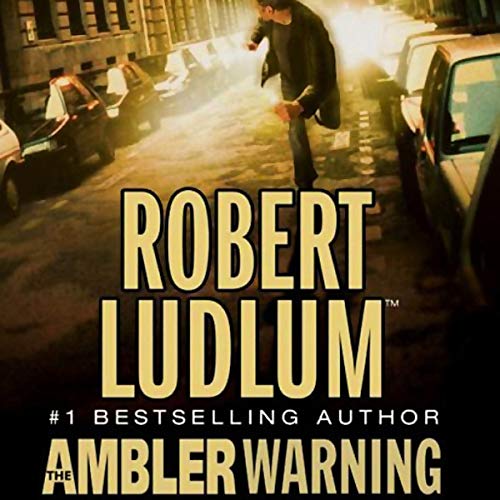 "Ludlum packs more suspense into his novels than any other six-pack of thriller writers combined." (The New York Times)

In Robert Ludlum's The Ambler Warning, an agent breaks out of a top security institution where the government has kept him drugged for years only to discover that he's not the person he thinks he is.

On Parrish Island, a restricted island off the coast of Virginia, there is a little known and never visited psychiatric facility. There, far from prying eyes, the government stores former intelligence employees whose psychiatric state make them a danger to their own government, people whose ramblings might endanger ongoing operations or prove dangerously inconvenient.

One of these employees, former Consular Operations agent Hal Ambler, is kept heavily medicated and closely watched. But there's one difference between Hal and the other patients - Hal isn't crazy. With the help of a sympathetic nurse, Hal manages to first clear his mind of the drug-induced haze and then pulls off a daring escape. Free, he's out to discover who stashed him there and why - but the world he returns to isn't the one he remembers.

Friends and longtime associates don't remember him, there are no official records of Hal Ambler, and when he first sees himself in the mirror, the face that looks back at him is not the one he knows as his own.

What Were They Thinking?

Could have been a great ride. If the narrator was asked to read this
book in this manner, he should have turned the job down. Seems like
an interesting story but my mind wandered so much due to narration not holding my attenton, could not wait until it was over

I have loved Robert Ludlum novels since my introduction to his writing in the early 80's. I have travelled to exotic locales, fought enemies of mankind, and loved with all the passion of his characters as they triumphed in their pursuits. But, the Ambler Warning is an utter disappointment. Be warned, this is not up to the character or caliber of Robert Ludlum. Perhaps he has lost his touch.

In the tradition of Ludlumese style, plot and execution, this latest book could have been more fun and enjoyable to hear had it not been for a choice of the narrator whose effeminate voice and poor elocution was a grave sacrilege to Mr. Ludlum and the eloquence of the previous narrators Erik Bergmann, Patrick Larkin and most specially Paul Michael. Mr. Sowers spared me from taking Ambien. I had difficulty discriminating the characters since there was not much difference in the decibels of their corresponding voices. It was monotonous.

Don't worry. I continue to be mistified by Mr. Ludlum's style and poetic flair despite my utter disappointment with Mr. Sowers. I just hope that for our sake, you reinstate Mr. Paul Michael. The way he narrated the Tristan Betrayal, Sigma Protocol and Janson Directive still reverberate in my mind

Spend your money elsewhere, this is a ghost written book in the Ludlum name and the writer must have been paid by the word. Huge long rambling passages read by a marginal reader. The books pace is slow and plodding and more importantly the characters are not well developed as they shift and change in how they act, think, and behave frequently. The plot is predictable after the first few chapters and the twist at the ending doesn't even come as a surprise. There is nothing to challenge the reader in this novel what so ever. If this had not been written as part of the "Ludlum" franchise it would be taking up space in trash can of an editor. Perhaps if you could find an abridged version of this novel it might decrease the suffering enough to at least be palatable.

A typical Ludlum, fast paced and exciting and because of that a lack of reality. The audio was quite good but the narrator lacked the ability to make the different characters stand out through their different voices. This genre works best in books, then on film and less so on audio tape in my view. It did help me get through long drives across the southern U.S. deserts!

Are there really people who are as skilled and knowledgeable as Hal Ambler? The "Jason Bourne" type character has been well used by Ludlum albeit highly successfully. I still rate the Gemini Contenders as my first and favourite Ludlum and one of my favourite books of all time but that judgment was made many moons ago when the genre was all quite fresh and new!

The story is great, but I strongly suggest the short version of this book. The author rambles on about many situations that do not add anything to the story. I can see how they can take this 16 hour book and shorten it to 7 hours. I found my mind wandering many times while listening to it.

Yes, this is a long book. Yes it is not easily digested, and yes it requires more than average concentration to enjoy, but it is also Robert Ludlum's work. To those reviewers who complain about it's pace and about its complexity I have to ask what they expected? Ludlum's work is a finely detailed portrait of implausible heroes thrust into near impossible situations against powerful foes. Anyone expecting a light,breezy watercolor of a book has no business reading Ludlum in the first place. If you are not into finely detailed characters and their interaction with one another, read another book. If you can't appreciate a complex plot, with many turns and twists, read another book. When you make the decision to read a Ludlum book you are committing yourself to investing time and concentration into it. This book, like all of my favorite Ludlum books, requires an effort to grasp and understand it's intricate structure. If you know Ludlum you understand that starting one of his novels is going to take you on a trip that is not suited for a day's effort. This book requires at least a long week-end, preferable longer, to absorb and savor in order to appreciate it. This book is not "fast food", it is an exquisite dinner to be enjoyed slowly and with deep appreciation of characters who you can only envy for their perseverence and originality as they grapple with great adversity. If you are willing to give it the time and effort it deserves, The Amsler Warning will remind you why Mr. Ludlum's passing is a cause of regret and mourning for his fans worldwide.

I would have given this 5 stars if it weren't for the reader. His single voiced style could put an insomniac to sleep. The story itself is great. Typical Ludlum, with lots of action and twists, but as I said, you have to concentrate not to let you mind wander

A good book but there seemed to be an unending "more of the same" pattern. The end was disappointing in that it ended quickly without full explanation. Almost like the writer got tired and wanted to get it over with. If you like suspense novels, you may enjoy it anyway.

Is he or is he not? That is the question!

This book brings to mind Emily Dickenson’s poem, “I’m nobody! Who are you? Are you know body too? Then there’s a pair of us - don’t tell! They’d banish us, you know.” Is Ambler or is Ambler not? Therein lays the mystery and a darn good one at that. From the beginning, there is action and intrigue. The twists and turns throughout the story make this book one you will not want to put down. The narrator—no, story teller—does an excellent job of bringing these interesting characters to life. To top it off, the ending is one I did not see coming. Bravo!

Robert Ludlum writes some excellent thrillers. This one is slightly formulaic and follows a similar thread to the 'Bourne' series. Having said that it was hugely enjoyable rollercoaster of a ride. The narrator's characterisation was excellent and subtle rather than over-the-top. All-in-all, very enjoyable, although I think most people will guess the ending before they get there.

I enjoyed this book. Classic Ludlum stuff really. It's long, I'll agree, but then I like long books that develop characters slowly. The ending is surprising to say the least.

As a Reacher fan, I was expecting a different voice narration, but styled enjoyed the deep, rich, very well researched story that is trademark of Ludlam. Some features of this story felt like Jason Bourne, but more than enough to be different enough to finish the book. Perhaps a bit too much detail in places but enjoyed all the same.

Robert Ludlum at his best always a roller coster.