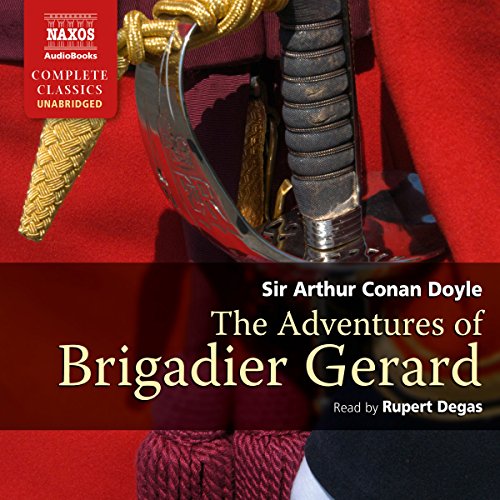 With a horse between his thighs and a weapon in his grip, the dashing Brigadier Etienne Gerard, Colonel of the Hussars of Conflans, gallops through the Napoleonic campaigns on secret missions for his beloved Emperor and his country. He encounters danger and hair-breadth escapes but never loses his bravado, his eye for a pretty girl, his boastfulness or his enormous vanity.

Sir Arthur Conan Doyle may be best known for his Sherlock Holmes stories, but they were not his favorites. He loved the stories that promoted the chivalric ethos, even if they sometimes made fun of their heroes, as here. Gerard is a cavalry officer who is devoted to Napoleon and is incapable of seeing the world through any other lens. Rupert Degas is reliably excellent as the ego-inflated officer who fails to see the differences between French and English values, remaining fully confident through what most of us would consider the most embarrassing situations. But Degas never loses touch with the man's innate courage, grace, and devotion to his principles.

The Adventures of Brigadier Gerardに寄せられたリスナーの声

I listened to this back to back with its companion piece, The Exploits of Brigadier Gerard. Gerard narrates his own adventures: the remarkable thing about them is that he shows real dash and courage, yet such is Conan Doyle's skill that his ridiculous vanity shows through plainly in his own words.

Gerard is a leader of the Hussars of Conflans, a celebrated cavalry regiment serving under Napoleon in his wars against Portugal, Spain, England, Russia, and Prussia; and in the course of the two volumes of stories we visit all those places. We witness Waterloo from Gerard's point of view and make a final sad visit to St Helena.

For me, Gerard is less interesting in himself than as a contrast to Sherlock Holmes: it's hard to think of two men who could be more different. I also have to confess that I got a bit tired of Gerard's routine before the end of the second volume. This is not a problem with the writing or with Rupert Degas' brilliant narration. I would have enjoyed the last few stories more if I'd taken a break between the two volumes.

One way to think of Gerard is that he's everything Richard Sharpe is not. If Bernard Cornwell didn't write an encounter between these two, it was a missed opportunity.

I was there... Watching... Listening..A great work

Would you listen to The Adventures of Brigadier Gerard again? Why?

What other book might you compare The Adventures of Brigadier Gerard to and why?

Arthur Conan Doyle is a gifted individual, and anything he touches becomes magical.

Hard to come up with one... but any where Gerard becomes the cause celebre with heroism at his back and homage in his front became all too common his life,

A sad tributary to a magnificent battle

This book was a wonderful find. I had not heard of Brigadier Etienne Gerard before finding it on Audible as I suspect he is somewhat eclipsed my ACD's arguably more enduring character; Sherlock Holmes.

Etienne is an endearing buffoon, deluded that he is the greatest swordsman, a dashing lover, a masterful horseman and the toast of the French Army. His exploits allow Conan Doyle to poke harmless fun at both the French and English traditions and stereotypes in equal measure and produces some genuinely hilarious moments in the process. Gerard is doubtless a brave man, but his desire to be chosen for absolutely any dangerous mission seems more driven by vanity and a wish to be seen as brave rather than for the sake of the missions objectives!

He is a 'Pepe Le Pew' character in the romantic department, continually making discreet, gentlemanly 'denials' as to his many conquests, but through ACD's subtle prose, there is no doubt in the readers mind that most of it is wishful thinking or delusional on the part of Gerard.

The narration was brilliant by Rupert Degas who faultlessly pulls of a faux-humble french accent that perfectly depicts Etienne's over-the-top but lovable character.

I will be listening to 'The Exploits of..' with the next available credits!

The Voice of the hero

What does Rupert Degas bring to the story that you wouldn’t experience if you had only read the book?

RD's narration is superb, really captures the character of the protagonist (and wonderfully covers the Brits too appearing in the stories). The narrator also fleshes out so well the ironies in the writing of these stories and escapades.