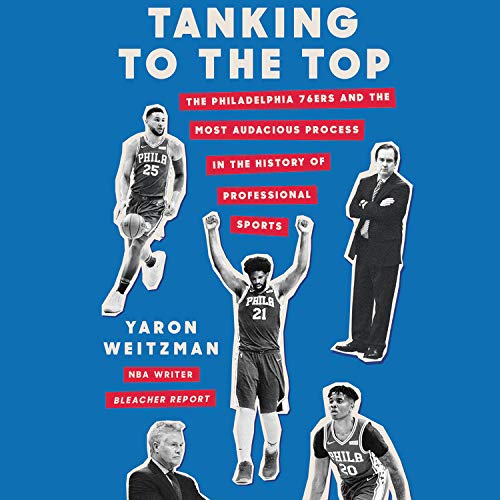 "There are layers to the brilliance of this book: The reporting is generally way deeper than what's come before. Much of the writing about "The Process" only muddies the waters, adds noise where we are desperate for signal. Here, for the first time, is an account that will confuse no one: Yes, this is what Sam Hinkie was trying to do; yes, it failed in some ways, and succeeded in others. The lucky readers of TANKING TO THE TOP will gain the insight to judge what was what. And finally, even with all of this new information to impart...it's still sexy and fun to read. How in the hell did he do that?" (Henry Abbott, founder and CEO, TrueHoop)

"'The Process' was the boldest, brashest, diciest, most controversial roster-building exercise we've seen in the NBA. Sam Hinkie's gambit alarmed fans and outraged NBA executives - and it worked. But the Sixers' rise from laughingstock to contender was so much more complex and layered than a two-word catch phrase. In TANKING TO THE TOP, Yaron Weitzman unearths new details and fresh insights, with an insider's expertise and a deft touch, providing the definitive account of this fascinating saga." (Howard Beck, senior NBA writer, The Bleacher Report)

Enter the City of Brotherly Love and see how the NBA's Philadelphia 76ers trusted The Process – using a bold plan to get to first by becoming the worst.

When a group of private equity bigwigs purchased the Philadelphia 76ers in 2011, the team was both bad and boring. Attendance was down. So were ratings. The Sixers had an aging coach, an antiquated front office, and a group of players that could best be described as mediocre.

Enter Sam Hinkie - a man with a plan straight out of the PE playbook, one that violated professional sports' Golden Rule: You play to win the game. In Hinkie's view, the best way to reach first was to embrace becoming the worst - to sacrifice wins in the present in order to capture championships in the future. And to those dubious, Hinkie had a response: Trust The Process, and the results will follow.

The plan, dubbed "The Process", seems to have worked. More than six years after handing Hinkie the keys, the Sixers have transformed into one of the most exciting teams in the NBA. They've emerged as a championship contender with a roster full of stars, none bigger than Joel Embiid, a captivating seven-footer known for both brutalizing opponents on the court and taunting them off of it.

Beneath the surface, though, lies a different story, one of infighting, dueling egos, and competing agendas. Hinkie, pushed out less than three years into his reign by a demoralized owner, a jealous CEO, and an embarrassed NBA, was the first casualty of The Process. He'd be far from the last.

Drawing from interviews with nearly 175 people, Tanking to the Top brings to life the palace intrigue incited by Hinkie's proposal, taking listeners into the boardroom where the Sixers laid out their plans, and onto the courts where those plans met reality. Full of uplifting, rags-to-riches stories, backroom dealings, mysterious injuries, and burner Twitter accounts, Tanking to the Top is the definitive, inside story of the Sixers' Process and a fun and lively behind-the-scenes look at one of America's most transgressive teams.

Obviously if you have any interest in the 6ers and/ or The Process this book will appeal to you. As far as I know its the only book available about the topic, so by default its the best.

Everything about this book was great from the details of the early struggles of the Hinkie days, the quick detailed summary of each player and the behind the scenes stories! Fantastic book. Great job narrating as well, I love it when the author narrates.

This provided me with a lot of info I didn't already know. It was well-organized and compelling to the point where I finished it in two days. Great for avid NBA fans!

This is a great break down of “ the process” I really hope this team wins a least one championship to make this worth the tanking.

This is such a well written book. I loved it start to finish. Every NBA game will enjoy this and even many who aren't will still.finsnit compelling. Hinkie may get another chance after this one makes the rounds.

A comprehensive history of the recent, since drafting Iverson, Sixers.. general managers, presidents, coaches, players, the sam hinkie saga, told pretty dispassionately, I don't think the guy took sides but tried to tell the story, from all sides, as fact based as possible. up to the reader to draw their own conclusions.. hinkie dealt in guerrilla tactics, he was ruthless in some ways, but his philosophy was data driven, unfortunately, Sam pissed off too many people in the end, other GM's, agents, league brass... his use of 2nd round draft pics, his philosophy, from a financial perspective, it was revolutionary what he did... he exposed a weakness in the NBA drafting system, and used it with amazing one-pointedness and steadfastness....he wasn't really trying to hide anything... some of the line-ups he put out there in those years, starting two players on 10 day contracts... etc... really awful... but MAN, DID HE HAVE A STRATEGY! so that's the deal, I think any Sixer fan, even non-Sixer fans, a lot of people would find this book interesting, but especially Sixer fans will love this book.

Great presentation of the facts without bias

This book does a great job giving the audience a necessary chronology for how the 76ers bridge the Iverson era to Post-Process era. Weitzman gives the reader/listener a better understanding for Sam Hinkie, the shortcomings that led to the series of of events culminating in his resignation, along with some clarity on the players, executives, coaches, and ownership involved in the Sixers for the last several years. the more open minded you are, the more you will truly appreciate this book.