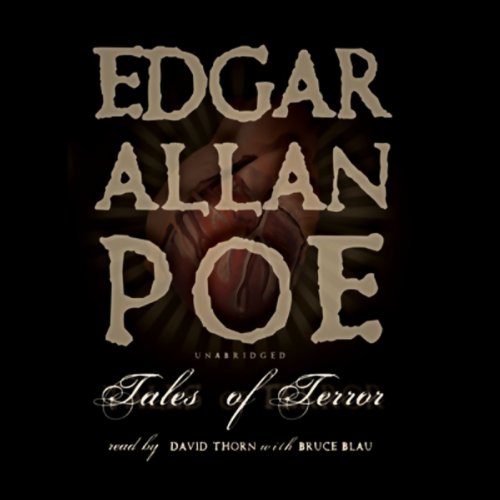 American poet, critic, and short-story writer Edgar Allan Poe is universally recognized for his cultivation of the macabre in fiction. His stories are characterized by an original kind of supernatural horror, often using the awareness of death as a catalyzing force in its own right. His tales and poems brim with psychological depth and intense imagery, made vivid through his musical language and hypnotic rhythms, which are especially captivating when heard aloud.

This special audio collection features some of Poe's best-known stories, including "The Tell Tale Heart", "Facts in the Case of M. Valdemar", "Hop Frog", "Murders in the Rue Morgue", "Masque of the Red Death", "The Pit and the Pendulum", "Fall of the House of Usher", "The Black Cat", and "The Cask of Amontillado".

It was very difficult to concentrate on what was being read because the narrator kept changing accents. I’ve found the audible originals of Poe’s work are better read and wish there were more free ones. I can see why this one is free

The Stories Were Good. Audio Quality Was Not

I have always enjoyed the stories and poems of Edgar Allan Poe and this collection was no different.

Bruce Blau and David Thorn did fine jobs performing these stories, however the audio quality was only fair at best. There are several areas where it sounds as if the narrators were talking in a tunnel, whether it be one word or several. It was distracting and annoying while listening to this book.

Edgar Allan Poe. What else is needed to be said? A collection of short stories it's a good read for October and really get's you in the mood for October 31st! Not exactly known for in depth plots the power he wields over descriptive narrative is unparalleled even today.

After several attempts to listen I have given up by mid chapter 3. The accents are too distracting and won't allow be to enjoy the stories. I had to stop at the beginning numerous times because the performance sounded too much like Foghorn Leghorn or the mocking of a Col. Sanders of KFC ads. Add in the layer of random edits with very jarring changes in audio quality it is not listenable to me.

The book was almost totally ruined by interludes of inane musical interludes and a chirpy voiced announcer. Both broke up the narration to the extent that my enjoyment was greatly lessened.

A good introduction to Poe's writing

It's time for me to make yet another awful admission. I've made it past 40+ years on this planet without reading much of Edgar Allan Poe's writing. If I recall correctly, I read "The Black Cat" when I was a wee little thing, but I don't think it stuck with me. Tales of Terror by Edgar Allan Poe, narrated by David Thorn and Bruce Blau was included in my Audible subscription, so I figured why the heck not.

Included in this batch were the following stories: "The Tell Tale Heart", "Facts in the Case of M. Valdemar", "Hop Frog", "Murders in the Rue Morgue", "Masque of the Red Death", "The Pit and the Pendulum", "Fall of the House of Usher", "The Black Cat", and "The Cask of Amontillado".

So, in other words, all the great classics. My big takeaway from this is that Mr Poe has a bunch of favourite words, some of which include "ghastly", "grotesque" and "hideous", among many others, and he had an especial love for describing the beating of hearts of the horror of staring into eyes.

I will admit that as a cat lover, I found "The Black Cat" hard going – more so this time around than when I first read it. "Masque of the Red Death" was oddly apt for the times in which we live. Overall, I appreciated delving into these tales, as the prose is slow-moving, highly descriptive, and layered. Dark, of course, too, which is a bonus. And very much what I would term Gothic fiction.

The production quality was a bit patchy in places – I could clearly hear where extra bits were dropped in, as there was variance in the sound which jumped out at me enough for me to feel the need to comment. Some of the accents the narrators put on also grated on me a wee bit. Not enough to toss the iPhone across the kitchen, but enough to raise a brow.

If you're looking to add to your literary experiences, this is a good introduction to Poe's writing. And I can say that it very much comes alive as spoken word – to get past the author's general wordiness, that is. And he does take a while to get to a point – but then the writing is very much a product of its time, which is something to be kept in mind.

Not a very relaxing listen

I love Poe but this is not for you if relaxing or sleeping while this is playing is your plan. The loud spikes and music are really jarring. This my opinion though. To me the music would fit a horror movie better, rather than stories with existential dread.

Poe is a true classic. This narrator brings something extraordinary to these already compelling stories. The intermission music was a nice touch, too. The narrator may not be what you’re expecting, but don’t give up on it; it’s truly a transcendent experience. Favorite: Masque of the Red Death.

it's Poe but not as you know it