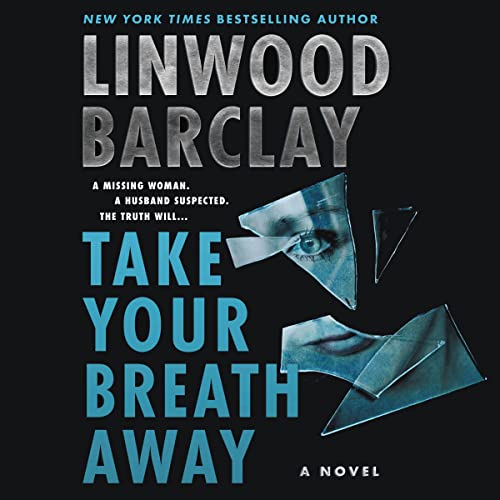 Take Your Breath Away

From the New York Times bestselling author of Find You First and Elevator Pitch comes a gripping psychological thriller about a formerly missing woman who has suddenly returned under mysterious circumstances.

One weekend, while Andrew Mason was on a fishing trip, his wife, Brie, vanished without a trace. Most everyone assumed Andy had got away with murder—it's always the husband, isn't it?—but the police could never build a strong case against him. For a while, Andy hit rock bottom—he drank too much to numb the pain, was abandoned by all his friends save one, nearly lost his business, and became a pariah in the place he once called home.

Now, six years later, Andy has finally put his life back together. He sold the house he once shared with Brie and moved away. Truth to tell, he wasn't sad to hear that the old place was razed and a new house built on the site. He's settled down with a new partner, Jayne, and life is good.

But Andy's peaceful world is about to shatter. One day, a woman shows up at his old address, screaming, "Where's my house? What's happened to my house?" And then, just as suddenly as she appeared, the woman—who bears a striking resemblance to Brie—is gone. The police are notified and old questions—and dark suspicions—resurface.

Could Brie really be alive after all these years? If so, where has she been? It soon becomes clear that Andy's future, and the lives of those closest to him, depends on discovering what the hell is going on. The trick will be whether he can stay alive long enough to unearth the answers.

I’ve been a fan of Linwood Barclay for many years. He writes novels that although big on character development are also based in reality. This book begins completely realistic and then takes a turn into what feels like complete fantasy only to come back to reality with a really good twist that will take your breath away!!!!
The poor husband Andrew with all his trials and tribulations! He has suffered so much. His wife disappeared. He is the main suspect for the police who believe that his wife didn’t disappear but that she was instead murdered. They believe that the woman seen around town is not Andrew’s missing wife but a look alike. They believe Andrew hired her to muddy the waters and cast doubt on the theory that Andrew could be the murderer.
The multiple narrators worked very well together. Bravo to all of them for the excellent performances.
This book has my HIGHEST RECOMMENDATION.
Hopefully Audible will post this review. They have been holding many of my reviews for sometimes weeks at a time with no reason or explanation.
If you found this review helpful please indicate so.
Thank You.

This book was so good I listened to it all on one day. I could listen to Joe Knezevich narration all day.

Good, easy story to rest. Thought I knew the killer, then changed my mind. Kept me guessing to the end.

I usually figure out mysteries. i did not until right at the end but, even then an unexpected twist threw me for a loop.

Linwood Barclay does not disappoint!

After loving Trust Your Eyes, I fear a letdown, but Barclay delivers every time.

Just mediocre for me

This one was just mediocre for me. I was engaged in the story but it just didn't really thrill me. The narration was pretty good. I'd list them, but it had eight narrators.

This Guy Can Write!

I have listened to several books by this author and every one of them have been so intriguing, but this one is my favorite! His characters are so real and so easily identifiable. There are always little twists and surprises right up to the last paragraph and I am never disappointed by the ending. The narration is excellent as well. Highly recommend! Now I am off to do a little research and find any of his previous novels that I may have missed out on. I sure hope he keeps writing!

it was hard for me to stop it was so good. I loved it kept me on the edge of my seat.

A very thrilling story with a superb narration! Enjoyed it very much. Linwood Barclay is one of my favorite authors.

Barclay didn't take my breath away. with this book

I found it disappointing in the following ways: poor prose and editing, characters were caricaturized, gratuitous profanity throughout, a discouraging plot, and a sad final ending.

Barclay did insert some positivity with acts of love, good overcoming evil, and folks given second chances.

But when I finished this book, I reached for an edifying antidote read.

I have to confess I'm not a fan of police stories or entertainment violence. I'm more into hope than misery.

But it is good for me to climb out of my rut, enough to see over the edge, what a lot of other folks apparently enjoy.