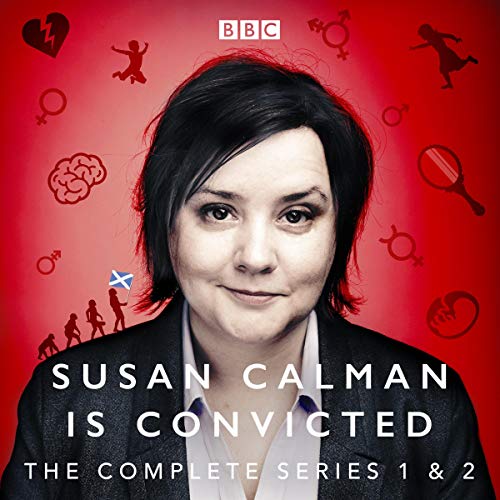 Susan Calman has some very strong opinions, and in her radio debut she expresses them with her trademark wit and charm. In series 1, she examines the current hot political topic of equal marriage, looks at the issues surrounding the death penalty from the perspective gained whilst working on death row, considers how best to deal with depression and evaluates what it means to be Scottish.

In series 2 she explains why she has never been interested in having children, explores society’s obsession with appearance, discusses intellectual snobbery and asks what it is that makes us human.

The first series of Susan Calman Is Convicted won the 2013 Writers' Guild of Great Britain Awards for Best Radio Comedy.

Recently discovered Susan Calman on an Audible binge of the News Quiz. The only antidote to anxiety about the way the world is going is to approach current affairs through humour!
I haven’t seen her on TV; I don’t have the concentration to watch Strictly.
Susan is funny and she’s opinionated in a good way.
She’s even met Sr Helen Prejean and visited death row in USA, as a sort of elective.
I even forgive her for studying at Glasgow, in spite of the eternal rivalry between my alma mater, Edinburgh, and the Weegies of the west.

I happened upon Susan Calman by happy accident whilst radio-station-hopping, and am SO glad I did. She is a worthy successor to Victoria Wood, with her funny oblique way of looking at life.

Extremely funny radio show by "in my opinion" the most talented Scottish comedian since Billy Connelly.

Susan Calman has grown in to being one of my favourite people to listen to - particularly on any of the Radio 4 comedy programmes I listen to.

This is great fun.

one off the best Scottish comedians

Susan you convinced me in such a funny way!

Susan is warm, witty, insightful, and laugh out loud funny! On my 3rd listen and find her captivating. As a 46 year old male probably not her target audience but I love her. Have gone on to purchase other titles by Susan. Thank you Susan, particularly for Prime Suspect Cats Day!