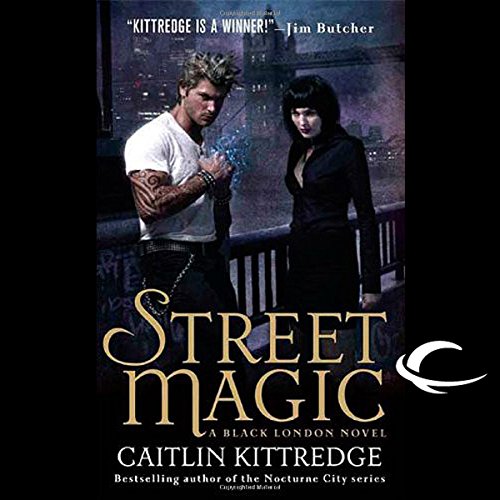 "Kittredge knows how to create a believable world, and her fans will enjoy the mix of magic and city grit." (Publishers Weekly)

Her name is Pete Caldecott. She was just 16 when she met Jack Winter, a gorgeous, larger-than-life mage who thrilled her with his witchcraft. Then a spirit Jack summoned killed him before Pete's eyes -or so she thought. Now a detective, Pete is investigating the case of a young girl kidnapped from the streets of London. A tipster's chilling prediction has led police directly to the child, but when Pete meets the informant, she's shocked to learn he is none other than Jack. Strung out on heroin, Jack is a shadow of his former self. But he's able to tell Pete exactly where Bridget's kidnappers are hiding: in the supernatural shadow-world of the fey. Even though she's spent years disavowing the supernatural, Pete follows Jack into the invisible fey underworld, where she hopes to discover the truth about what happened to Bridget - and what happened to Jack on that dark day so long ago.

Too much damsel in distress

This book had potential but failed to pay it off. No characters to root for.

i was really disappointed with the narration. the story was okay but the constant whining of "jaaaaaack!"really did my head in! it distracted from the story line and Pete Caldecott's portrayal by the narrator as a whiny (and slightly stupid) female cop did the book no favours.
i unfortunately bought books 1 and 2 and can't physically bring myself to listen to book 2 now.
It's times like these i wish i'd actuallu read the reviews before buying the audiobook!

Gets better towards the end, but never takes off.

I found the characters of this book to be oddly soulless. Even at the end of the book, I still felt like I hardly knew both main characters. I didn't feel any chemistry between them - their interactions seem to consist mostly of being annoyed at each other or Jack asking Pete to run away and leave him to his fate - while Pete is whining "Jaaaaack!" and insisting on staying.

Which brings me to the second biggest issue; the narrator is portraying Pete in a whispery, high-pitched, whiny voice that totally makes her sound like that faint-ready damsel in distress that she proclaims she's not. The whiny "Jaaaack!"s get old pretty fast, and there are MANY of them. I haven't minded any of audibles narrators before, but this one certainly did the book no favors.

The story isn't too captivating. Although the classic story of bogeymen stealing the poor children DOES have a few interesting sidetracks, it's a bit too predictable and never really gains speed.

The book ends with a lot of potential for the sequel, but unfortunately I find I'm not really interested in finding out what happens next.

I am sorry to say that as I am only new to Audible listening this was a bad choice of books to start with! The story could have been a great one if only I had chose to read it myself! I found the person who narrated this story did not do the book any justice at all.
This story really needed a person who could portray everyone with much more strength than were given and in the end I could not listen to the whole story and it has almost put me off any other title you may have here to listen to! I am now struggling with the idea that Audible books are a great way to 'read per say' a novel..

I think that the story line has promise, but was hard to stay focused on the story. Maybe that it is the first in a series, they would get better? Not sure if I want to find out.