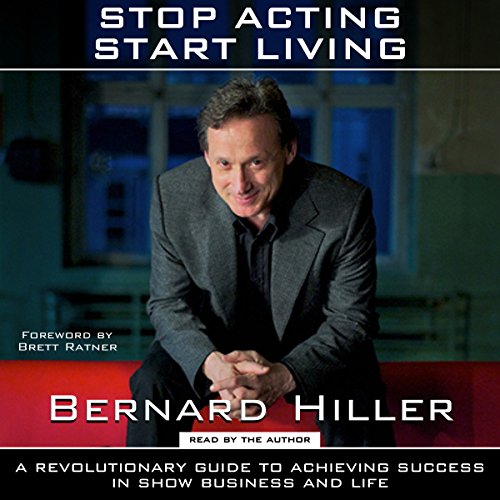 Stop Acting, Start Living is the culmination of 35 years of performing and teaching experience around the globe. Hollywood Acting and Success coach Bernard Hiller has worked with Jeff Goldblum, LL Cool J, Lindsay Lohan, Billy Crystal, Chace Crawford, Michelle Pfeiffer, and Emilio Rivera among many others. Bernard coached Cameron Diaz for her first big audition The Mask with Jim Carrey, which launched her career. His revolutionary techniques have changed the course of lives and careers. There has never been a book available that takes the acting techniques of a Hollywood star-maker and teaches business people how to become stars in their lives and careers. Bernard is the only coach who combines acting technique, life coaching, and success training in an entirely new and transformative way. Leonardo DiCaprio, CAA, Samuel L Jackson and other stars have recommend him as the premier acting teacher in town. Casting Director April Webster (Star Wars)... I have seen firsthand how his techniques instantly improves your talent. Academy Award Nominee Bruce Dern. There is no class like it in America.

Good book for a complete novice. Some good acting techniques but mostly a pep talk. Could be inspiring. It’s clear Bernard has Life Coaching experience. Sections on competencies, Blocks, and Rules for Hollywood, seem like a Coaches perspective. I can respect the fact that what gets in the way of most actors is the actor, but if you are looking for ACTING tips and techniques...I’m not sure. He does provide a good structure for the Needs of a Scene. Overall the book is basic.

Absolutely life changing for me as a man and as an actor. A must have for those who want to be their best.

An Essential Book for Any Actor

Read it if you want to be a great artist or at least a good one.

Health and Wealth guide to Success!

Thanks! You opened my eyes. I must train with you. You are an Incredible Educator.

This book helps you to discover yourself and frees you of the many things that hold you back.

It is a fraud. Don’t waste your time!

It has absolutely nothing new to say. It is like one of those self help books, which just prays on people’s hunger to become an actor. It is shameful to what extent some people go to earn money.

I love it! It was my first audiobook and it was nice to hear it with the author's voice! There are a lot of interesting parts, advices and experiences! I recommend it for actors who plan to work, specially, in English speaking countries.

Light-hearted, focused and brilliant! Bernard Hiller can guide you into your truest expression of power and harmony!

A must to read

Exactly what you need to hear

If you could sum up Stop Acting, Start Living in three words, what would they be?

This book is very refreshing. Gets you to see acting with a different perspective and opens you up to the reality of acting. It will without a doubt light up that flame inside of you and keep it burning. There is a reason why we call Mr. Hiller the star maker. Read his book, listen to it, it will make you happy and leave you wanting more.

INSPIRATIONAL - A MUST READ!!!

Everything I've needed to hear!

As an actor myself it's hard to stay motivated especially during drought periods where auditions are scarce.

Some of Bernards teachings I've already known but he breaks down every barrier leaving no stone unturned. I'm going to have another listen this time highlighting a few notes.

I highly recommend this book not just for actors but in life for the power of positivity, gratitude and well being.

I will listen to it again soon.

A definitive guide to making it in Acting, and in life itself

This book is an incredible and concise guide to transforming your life. It doesn’t beat around the bush at any point.
I love the way that Bernard Hiller gets straight to the point, unlike many academic writers who seem to take so long to convey a simple point.

His volume of life enhancing objectives are accumulatively focussed in such a singularly and beautifully simple title...
Stop Acting, Start Living.

Who would have thought that such straight forward assistance in life would transform a life so readily? But it really does work.

There’s an incredible volume of wonderful life enhancing messages, but the most important for me have been, be dynamic, seek adventure, take big risks, be optimistic, love... and most importantly, follow your beautiful heart.

I originally downloaded this to pass the time while riding the train to my acting class and got a lot more than I bargained for. this book is fantastic and eye opening.

I recommend this audio book to aspiring actor as it helps you realize what you really want in your acting career and also to acknowledge the pros and cons. Bernard is very accurate in his description of the industry.

Even better than the book!

I bought and read the book in preparation for an upcoming Masterclass with Bernard. I was advised to buy this audio as well, because it would be 'even better'.

I can totally attest to the fact that it is! Bernard's passion and energy pours out of every word. Having this audio now allows me to better use my 'dead' time (driving, walking, train journeys) and has already massively changed my life in a profound and positive way!

If you are serious about becoming the best actor you can be, invest in this!

Bernard is the best in the business =)