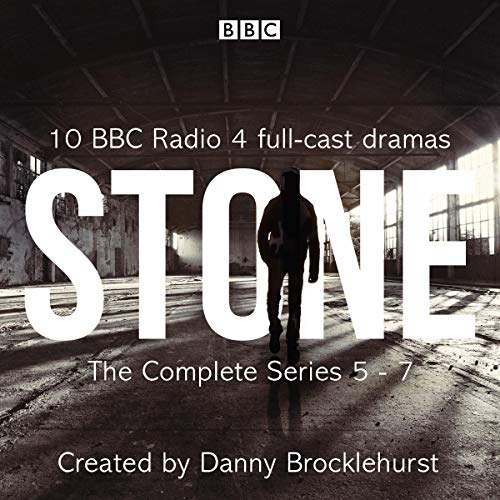 Manchester detective DCI Stone and his team are faced with 10 complex, morally challenging cases in this collection of hard-hitting radio dramas.

As series 5 opens, Stone is still reeling from the mishandled shooting of Callum Gartside, a gunman who had murdered his own family. With his personal life in tatters, he must find the strength to hold it together and do his job. In 'Dirt' by Martin Jameson, he investigates a body in a flooded gravel pit; in 'Blood Money' by Richard Monks, he looks into the hit-and-run killing of a cyclist; and in 'A Cut Above' by Marcia Layne, he looks into a suspected case of female genital mutilation. 'Progress', by Alex Ganley, finds him searching for the murderer of a garden centre owner; while 'Broken', by Vivienne Harvey, centres around a missing pregnant woman.

Series 6 includes 'Disclosure' by Richard Monks, 'Wishing Well' by Alex Ganley and Dan Allum, 'Casualties' by Martin Jameson and 'Damage' by Vivienne Harvey. In these four episodes, Stone unearths dark secrets following an arson attack on a school; struggles to find the truth about a dead body on an abandoned travellers’ site; hits an unexpected obstacle in a murder investigation; and goes undercover after a series of suspicious deaths among the homeless community.

Series 7 follows one case across 10 episodes, written by Martin Jameson, Richard Monks, Cath Staincliffe, Alex Ganley and Vivienne Harvey. After a fire at a hostel, a body is found - but who is he? Stone’s enquiries lead him to reexamine a murder investigation from 20 years before and uncover a web of lies and deceit that make him confront his past mistakes and lead to personal trauma.

Moved me to tears

These three series of Stone are magnificent audio drama. The characters grow, transform and truly engage. The stories are excellent and very believable. The final episode of series 7 is powerful like nothing I've heard before- and I write AD, and listen to a ton! Hats off to Danny Brocklehurst and his crew of writers, the actors and directors of this outstanding drama. I certainly hope there will be more because these characters are absolutely real to me. Bravo.

the narration the performance are spectacular

Loud sirens,ambulances and people yelling at each other... Not my cup of tea. Better as a TV performance.

great mystery collection of stories. the cast was superb. they delivered their lines with feeling, emotion. and strength

I wanted to put 5 stars for overall and performance as well but it won’t let me The characters are wonderful as are the gritty story lines. Usually I am not a fan if mixing personal stories in with the main plot but in this case it works for obvious reasons of work versus home life. Well done writer actors and directors. Loved it

That is some reeeally good audio series. First of all: marvelous acting and great sound effects. It doesn’t feel at all like actors recording a script, but as a real action going on in various places and conditions. Everything is very natural! There are some funny moments along with heartbreaking ones (like the final dialogue of series 7). I was also glad to hear Alice as an active character of series 7, who plays important role in the plot. I’ve been looking for something like that since finished this collection.

One of the best things on Audible. This continues on from the excellent Series 1-4. Great stories, great acting.

amazing stories and cast well worth a listen

Binge listened to this. Absolutely brilliant - could not put it down. Cannot recommend enough - I need more!

Yet another great series! I have really fallen in love with Sue Kelly, she's just one of the best characters and Deb McAndrew is just a brilliant actress. 💖 the chemistry between the three leads are just amazing, keeping everything crossed for more!

The characters and performances were great. The story was disappointing, 5 maybe more hours of Jackie Stanton whining & going on & on. I prefer the stone 1-4 audible series.

These are all superb stories with real colour and life. I had only heard 1-4 and was thirsty for more. Months later i accidentlly came across 5-7. Yippee! I only hope they keep it up for a 8-12.

Thoroughly enjoyed this. I love the story, background story and the interaction between the characters. Really well written.

A fantastic BBC radio drama. Worth listening to the first set of series. Highly recommend.

Easy to listen to and exceptionally well written - no complaints from me! Thank you!