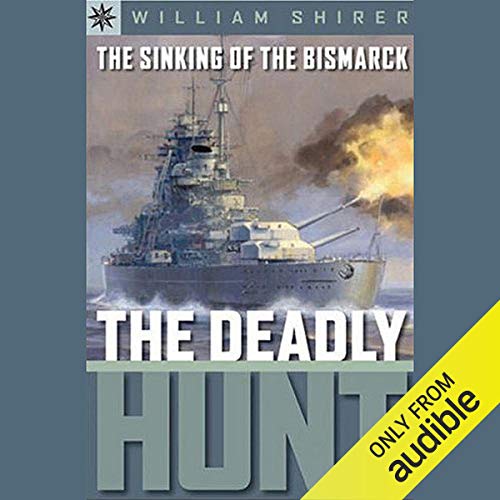 The Bismark was the greatest warship ever built, with guns so powerful and accurate it could destroy an enemy ship while safely staying outside the line of fire. But the Allies had to sink it...or risk losing the war.

William Shirer, famed World War II correspondent and author of The Rise and Fall of the Third Reich, captures every suspenseful moment of the perilous mission. Most tragic of all was the loss of the HMS Hood, the British Navy's star battleship, sunk by the Bismark in just minutes. However, a mixture of luck and new technology - including radar - turned the tide in the Allies' favor.

First, this is an Audible KIDS title.
This is not apparent on the summary page describing this book.
The narration is clearly directed at children.
References to Adolf Hitler are almost always suffixed by - 'The Nazi Dictator of Germany'.
When the story line mentions radar - the narrator follows it up with an explanation of how radar works and how a blip appears on the screen depicting the location of the enemy vessel.

I bought this book because the author was William Shirer (Rise and Fall of the Third Reich).
I wish Audible would clearly mark KIDS titles on the summary page.

I have given it three stars because the storyline is still interesting and does provide a view with some level of detail if you can get past statements like, "The might Bismarck was found." or, "The fog grew thicker and British ships trailing the mighty Bismarck lost her in the fog not to see her again for many hours."

Adults can learn from this book also.

Some of the info was thought to be true in 1962 but not now. No U-boat actually arrived while the Royal Navy was rescuing German sailors.

This may have been written for younger readers, but I found this an engaging account of one of the most famous sea battles of the second world war.

Well read narrative of one of the most important naval episode of WW2 in the European theatre.Must listen/ read to all those interested in naval warfare, and/ or WW2.

not in keeping with Shirer style

Very disappointing. William Shirer, was a writer and Narrator. He tells a good story, but with this; it all seems so choppy. The Narrator is just not up to the task. he has quirks he repeats throughout, almost treating every sentence in the same way. He seems very amateurish not to mention his frequent mispronunciations.

Find the BIGGEST Nazi Battleship and destroy her~

PLOT: 1941~ the biggest battleship in the Nazi Fleet is soon to be loose in the Atlantic...the British are out to find her and sink her.

The Bismarck is the largest of the Nazi Battleships newly made and out in the Baltic and headed to the Atlantic to sink every British ship she can find. She makes her move toward the Atlantic In the fog....but the Brits decided to head her off ...and send in their biggest and best...HMS HOOD which the Bismarck promptly sinks. the Brits decided they have to "sink the Bismarck" at all costs. Using a combination of surface ships and air craft carriers they soon merge on the Bismarck and slow her down but still she holds them off with 8....15 inch guns. The clever German Admiral using a zig zag pattern soon have her loose the "Brits" who are following her...and she is out of radar range and gone before they know what to do next. But logic gives her only two choices and the Brits again plot a "fleet" of ships with even more air power to lie between her and SAFETY in France for the ship. a DAMAGED rudder has the Bismarck making one last move to head to France with "air support" and seagoing tugs to pull the damaged super ship in. But HMS Rodney and torpedo planes from Ark Royal have one deadly battle with the Pride of the Nazi Navy. this book was written by William Shirer (Berlin Diary) and is very well done published as a "children's book" it is still both historically accurate and interesting as we learn the final days of the mighty Bismarck. The reader is very good and this is a book any one who likes history or World War 2 and yet enough details to keep an adult interested, I give this 4 STARS over all Good story.

The Sinking of The Bismark. The Deadly Hunt.

Wow..this is one heck of a true story and well read. It is the tense story of the Bismark and the threat it posed not only to Britain but in particular a dangerous threat to the Royal Navy. The danger that the Bismark posed was enormous, and had to be dealt with. When the Hood was sunk with all hands bar three. Britains navy had its orders to hunt the Bismark down and destroy her. Churchill had the RN pull out all the stops to dispose of the Bismark after the loss of the Hood. There are some interesting facts in this piece of history that were never mentioned, but this story is thrilling from the first word to the last. All the actions are beautifully explained in the thrilling and evocative spoken word that one can not avoid feeling part it. I enjoyed this audible book very much indeed. I am sure that you will to when you listen to it.