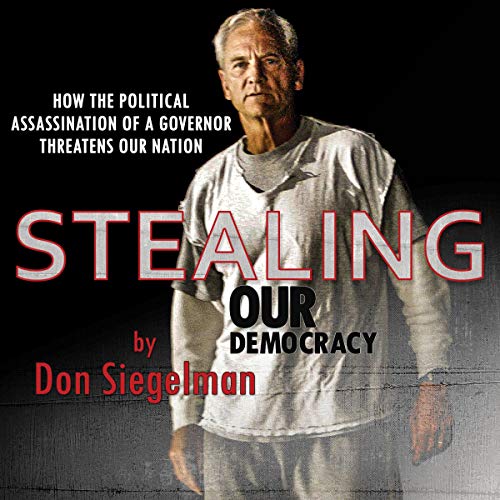 As Alabama’s governor, our economy improved; our strides in education gained national attention; I rallied voters, expanded my base and held the line against Republican dominance. As Southern Democratic Governors Bill Clinton and Jimmy Carter before me, I was ready to jump into the race for president. I just needed to win reelection in 2002 to launch my challenge to George W. Bush in 2004. That’s when forces of the Bush White House swarmed into Alabama and, in that instant, Alabama become a brutal political battleground.

Stealing Our Democracy is a nonfiction journey into political subterfuge waged by Karl Rove forces to plug the breach I caused in the Republican's Southern Strategy.

My book documents my rise as the son of a working-class family to a popular Southern governor. A Democrat, elected in a blood red state, someone Karl Rove deemed just had to be stopped.

On election night 2002, as I celebrated my reelection as Governor of Alabama, with thoughts of challenging Bush, in the basement of a south Alabama courthouse, the election is hacked, 6000 of my votes disappear, Credit is given to Karl Rove’s Deputy, my request for a recount is shut down by Karl Rove’s client, and I’m targeted for prosecution by forces directly linked to the Bush White House.

I was sent to prison by a US Attorney whose husband was running my opponent’s campaign, prosecutors who pressured a felon to lie, and rulings by a judge who was himself a criminal - all vetted by Rove and appointed by Bush.

Since I stood in the path of the Republican’s master plan, Karl Rove worked ruthlessly to install Republicans who would do his dirty work, even if it meant subverting our democracy.

My book details my struggle to change Alabama and the country. A journey from enlightened politics into dark and unspoken actions, a subverted democracy, bigotry and racism, a past once only a memory, now brought back to life by Donald Trump. My struggle was for justice, freedom and now to save our democracy.

When a story speaks truth and is compelling, it’s hard to put down. For those who were in within range of this political explosion, you’ll have a hard time putting this book down.for those who weren’t there, this is a must read. What happened to Don could happen to you too. Political activists who fight for justice become targets by opposition of injustice. This is one of the best hands on stories you’ll ever read and you won’t regret a single chapter. Names you’ll all recognize will bring it home and keep it real.

I just don’t believe you can be a political advocate for justice and paying forward the fight for our democracy and not read this book. I’ve read it 4 times and each time I learned something new.

An absolute MUST read....