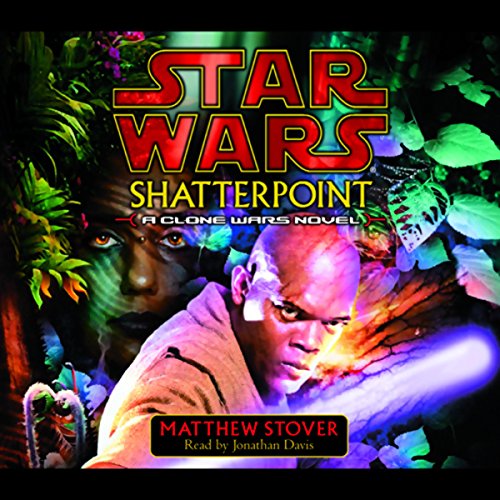 "Close your eyes, and there is Mace Windu (portrayed on the silver screen by Samuel L. Jackson). Narrator Jonathan Davis's voice is perfect, and behind him are the first-class special effects and music that characterize most Star Wars audiobooks. Even better, the writing is also first-class - this is a descent into the heart of darkness for one of the most powerful Jedi masters, who in Stover's hands comes alive with the complexity of a spiritual and physical man". (AudioFile)

“The Jedi are keepers of the peace. We are not soldiers.” (Mace Windu, Star Wars Episode II: Attack of the Clones)

Mace Windu is a living legend: Jedi Master, senior member of the Jedi Council, skilled diplomat, devastating fighter. Some say he is the deadliest man alive. But he is a man of peace - and for the first time in 1,000 years, the galaxy is at war.

Now, following the momentous events climaxing in the Battle of Geonosis, Master Mace Windu must undertake a perilous homecoming to his native world - to defuse a potentially catastrophic crisis for the Republic...and to confront a terrifying mystery with dire personal consequences.

The jungle planet of Haruun Kal, the homeworld Mace barely remembers, has become a battleground in the increasing hostilities between the Republic and the renegade Separatist movement. The Jedi Council has sent Depa Billaba - Mace's former Padawan and fellow Council member - to Haruun Kal to train the local tribesmen as a guerilla resistance force, to fight against the Separatists who control the planet and its strategic star system with their droid armies. But now the Separatists have pulled back, and Depa has not returned. The only clue to her disappearance is a cryptic recording left at the scene of a brutal massacre: a recording that hints of madness and murder, and the darkness in the jungle...a recording in Depa's own voice.

Jedi were never intended to be soldiers. But now they have no choice. Mace must journey alone into the most treacherous jungle in the galaxy - and into his own heritage. He will leave behind the Republic he serves, the civilization he believes in, everything but his passion for peace and his devotion to his former Padawan. And he will learn the terrible price that must be paid when keepers of the peace are forced to make war....

I'm not sure why this was abridged, I don't care enough to research it. But I have read the book and listened to the audiobook, and there is simply no value in the abridged version, not as compared to the book. The story is good, as is the narrator, I wish he could have read the whole story, its not his fault. You are better off reading it, I'm sorry to say.

To many question left unanswered. Probably because this was the abridged version. I did gain and greater understanding of Mace but the ending was disappointing.

if only it weren't abridged...

Having read the print version of this book and loved it, I was looking forward to having an audio version of this to enjoy while on the road. And while I can say that overall the performance was pretty good and that it was just as enjoyable as ever to experience Matthew Stover's writing, having this story shortened to the version that it is now, did end up undermining the whole thing. The overall plot and tail is still there, and it is still enjoyable to listen to, but there are certain important events, and certain moments of character development and dialogue, that I felt help enrich the tale, and these are missing in this version. In fact, because of the missing portions of the story, it even proves to be somewhat misleading, as the fates of certain characters end up being left to the reader's imagination, and they may and the fearing the worst... In fact from what I've gathered from some reviews, many people are assuming the wrong thing about what happened with a couple of the characters already. Of course, one only needs to read the complete version of this book in order to get the whole story, but one shouldn't have to go through that just because they ended up with the audiobook version. Still, Jonathan Davis did a pretty good job, and while his voice wasn't exactly spot on for Mace Windu, it was still a pretty good interpretation of the character, and every other character was performed very well. Overall this is a good audiobook, and the story itself is very good, as per usual for Matthew Stover. It is just a shame that this had to be abridged. I do hope that the complete version of the story will end up in audiobook form sometime down the line.

Performance was fine. Story might have been fine too, but the only way to know is to read the book or find an unabridged version of the audiobook.

Would you recommend this audiobook to a friend? If so, why?
In a heartbeat, because the story is remarkably good...but quite frankly this audiobook should have been unabridged. I owned the ebook so I could read as I was hearing an I noticed that many great things were ommited. I know that abridged productions can't have it all but this is without a doubt the most thought-provoking Star Wars Novel I have ever had the pleasure of enjoying; hence the title of my review. A complete narration would have been amazing.

Having said that, there were many additional SW sounds that went well with the production and Jonathan Davis did an excellent job again. If I had to mention my favorite aspect of the audiobook it would be the sound effects for the jungle voice of Kar Vastor. Very well done and much better than what my imagination would have come up with otherwise.

What other book might you compare Star Wars: Shatterpoint: A Clone Wars Novel to and why?
Off the top of my head...none actually and I have read/listen to plenty of Star Wars books. The deep themes, the controversial topics, the countless thought-provoking one-liners...all of this was blended in such a way that it turned it into a fairly unique Star Wars experience for me. And I mean that as a compliment.

Which scene was your favorite?
Hard to pick a favorite with such an amazing book but if I had to single one out...the Duel between the 2 Masters of Vapaad was definitely intense and emotional. And that's as specific as I can get without heavy spoilers.

Did you have an extreme reaction to this book? Did it make you laugh or cry?
There was one scene that filled me with dread me. Not because of the gore of the scene but because for a moment, after the blood settled, I realized with horror that I could comprehend where the antagonist was coming from to justify his recent murder. The phrase "Old enough to kill, old enough to die," rang in my head for days. What a crafty author for compellingly pulling something like that off.

Any additional comments?
Kar Vastor was quite the interesting antagonist and I would really like to read/hear more of him.

Also, this book was quite gripping. Once I started, I finished it in 2 days. So, excellent job overall, despite the lack of an unabridged version.

They ruined this book.

meh. I guess I was expecting more.

I just thought it was meh... the ending just kinda stops...abruptly. I mean you're gonna end it with, You're under arrest...

Such Wasted Potential For A Mace Windu Story

I was excited for this book, because Mace Windu is one of the important characters that NEVER gets any solo content. The premise sounded interesting, and his musings in the beginning about how he could've sacrificed himself on Geonosis was a great start.

However, that's where the fun ends. Mace is lured to his home planet of Haruun Kal, where he must find his wayward student. Haruun Kal is racism the planet, where everyone hates anyone different than them, and Mace Windu occasionally talks in an African-esque accent to match his appearance of one of the factions. While that is fine and dandy, the only likeable character was comic relief, and Mace was kind of an ass to literally everyone around him, even when the situation didn't call for it. Most of the story didn't make sense, and was more mess than a coherent plot. This is the first Star Wars audiobook I just wanted to end.

Jonathan Davis is great, but his performance didn't shine as much as usual, almost as if he wasn't enjoying the book either. Not saying he did bad, but it wasn't his best. I'd say only listen to this if you don't have anything else.

There were many plot points missing from the audio version that were in the book. In particular the ending was cut off leaving a felling of things being unfinished. Why they chose to do that made no sense. I also find it interesting that the only black Jedi had an origin storyin the jungle, fighting other savage blacks. This was not done by accident, and they say rasism is dead?

loved this book! does a great job telling the story and making you feel like you're watching it right in front of your eyes. the sound effects and voices are very well done. Highly recommend

Great story, enhanced by fantastic narration by Jonathan Davies :-) Brought Mace Windu to life in a way we haven't see before!

I love Mace! so much more could have been done for this character, I'd like to see more books, better books for Mace Windu.

shame it was abridged

the private of journals

This is a great story to tell the life of Mace Windu. Gives you a real insight into the man. Storey is well read and was very entertaining a great short book.